Phew – last week Kimberly and I spent 3 days teaching the ins-and-outs of SQL Server 2008 for DBAs/IT-Pros to about 130 Microsoft SQL Server experts and MVPs (like Kalen Delaney, Adam Machanic and Ron Talmage). This was the (95% complete) Beta delivery of a course we’ve been developing for the last six months for Microsoft that they’ll use to train their SQL experts around the world on the new release. It’s been very interesting watching the features develop through the CTPs (especially since I left the fold last August) – and making demos work on pre-release builds of the CTPs.

Teaching the course was a *blast* – the thing I love about teaching a really geeky crowd is the plethora of great questions and opportunities for going deep with explanations. Our team actually wrote and delivered the concurrently presented Developer and BI tracks as well. As you can see from the list below (and this is just the features a DBA needs to use/know about), SQL Server 2008 isn’t a dot release of Yukon at all, as some people have suggested. Over the three days we covered:

The features marked with a (D) are ones I demo’d during the course (Kimberly demo’d a bunch of the others – especially the tools features). Some of the demos were challenging to make work in time as we only got a pre-CTP6 build mid-January just before we headed off to China.

So why am I posting this? Well, a bunch of these features are in CTP-6, which should be just around the corner, and I have some easy-to-understand demos of them that I’ll be posting here over the next month or so. Also, if this course sounds interesting, Kimberly and I will be teaching it in various configurations over the next year – starting with SQL Connections in April, a soon-to-be-announced class in Iceland in March, and the ITPro portion of TechEd in June.

Watch this space starting next week (today’s the last day of six straight weeks of teaching for us so this weekend’s a break :-))

Wow – so many blogs!

Last year I posted on my old blog about the active SQL Server team blogs. I just happened to post on February 14th and so in every class Kimberly teaches, she makes fun of how romantic I was to post that on Valentine's Day. So what better thing to post this year than an update to that old post!

Again, this is a list of 'active' blogs, not just one-post wonders, or blogs that are inactive but have a ton of fantastic info archived on them. I've grouped them by rough area and updated the list from last year, removing some that have been inactive for many months. I've also added a list of non-SQL team blogs that I follow too. Eventually I'll put this on our blogs page too – http://www.SQLskills.com/blogs.asp.

Almost a year ago to the day I asked a question on my old blog – how long does *your* CHECKDB take to run? Well, I had a bunch of replies but I never got around to posting the results. I was reminded of this recently so threw together some graphs of the results. I've plotted database size against run-time of DBCC CHECKDB, for a number of different numbers of CPUs, and mostly on SQL Server 2000. I've also added a linear trend line too.

Now – bear in mind this doesn't take into account the multitude of other factors that can affect how long DBCC CHECKDB takes to run (see my previous post here for the list).

Hopefully these are interesting to some of you! 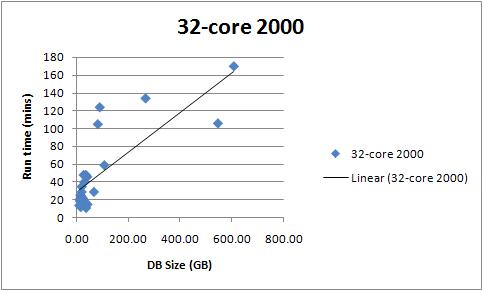 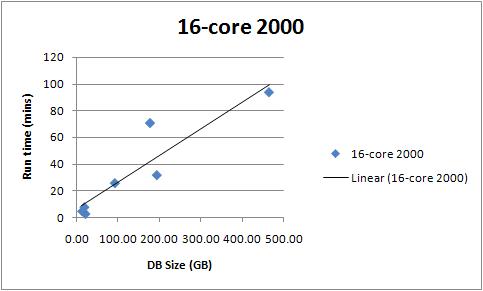 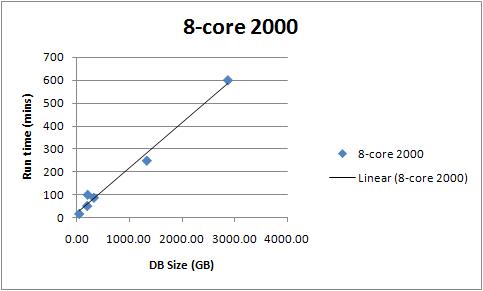 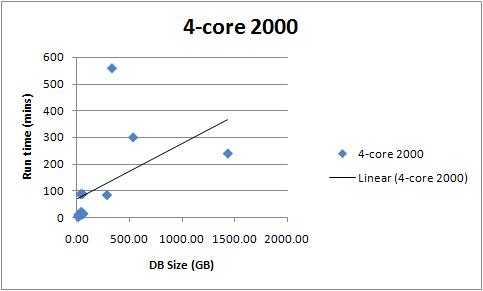 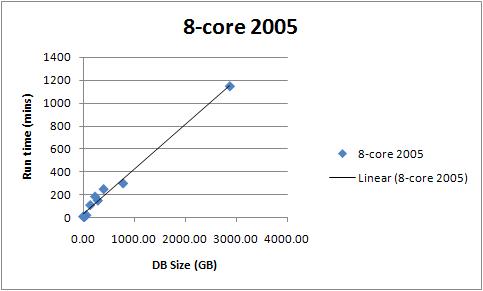