Microsoft recently released a hotfix for a memory leak leak issue that affects SQL Server 2008, SQL Server 2008 R2, and SQL Server 2012. This memory leak only occurs if the have the AUTO_UPDATE_STATISTICS_ASYNC database level setting enabled for any of your databases. Here is how Microsoft describes the issue in the hotfix KB article:

I have cleaned up the T-SQL for the two queries that Microsoft supplies in the KB article to detect this issue, as shown below:

According to my friends at Microsoft, this issue has been present since the RTM builds of all three of these major versions of SQL Server. Depending on how many databases you have with this database-level setting, how many objects (indexes and statistics objects) they have, and how often they are automatically updated asynchronously, this memory leak could add up at quite different rates.

The latest Cumulative Updates for all of the active branches (except for SQL Server 2012 SP1) of these three major versions of SQL Server all have this hotfix, as shown below:

If you are on an older build of any of these three major versions of SQL Server, you can either disable this database level setting or you can get one of these Cumulative Updates installed. Personally, I would much rather be up-to-date on my SQL Server Build rather than disable this setting (which I believe is quite beneficial for most workloads).

This setting reduces unpredictable query performance by allowing statistics to be automatically updated asynchronously while your currently running queries continue to use the old statistics until the updated statistics are ready to use. The alternative to this (which is the default) is for query execution to halt (only for queries that use statistics for that object) while the statistics are automatically updated synchronously for that object. Depending on the size of the object, and on your hardware and I/O subsystem, this could take anywhere from a few seconds to many minutes.

You can check which of your databases have this setting enabled with this query:

You can also look in the SQL Server Management Studio (SSMS) Database Properties – Options page to see this setting. 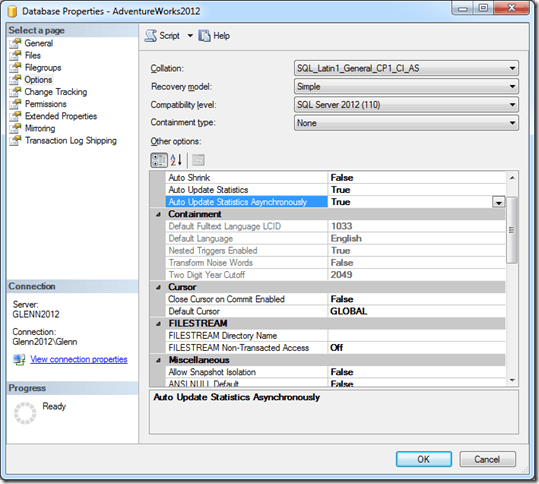 I have used this database-level setting for years, on many different databases, in many different environments, with very good results, and I plan on continuing to use it in the future, because I think it is very helpful, especially for OLTP workloads. If you are concerned about this memory leak, I think the best solution is to get a Cumulative Update that includes the hotfix installed on your instance as soon as you can do your planning and testing.

16 Responses to Important Hotfix for SQL Server 2008 and Newer