For Day 13 of this series, I want to talk some more about the Intel Tick-Tock Development model and why it is important for the database professional. For the last seven to eight years, Intel has implemented a pretty consistent and predictable processor development and release cycle. A Tock release is a completely new microarchitecture that uses the existing manufacturing process technology. A Tick release takes the existing microarchitecture and moves to a smaller manufacturing process technology, sometimes with some added architectural improvements. Tock releases happen every two years, while the Tick release happens the following year, which means you get a Tick or a Tock release pretty much every year. In a nutshell, the Tick-Tock development model helps you plan for when it makes the most sense to make a platform upgrade, by looking at what Intel is doing with processor releases and seeing how that relates to what Microsoft is doing with operating system and SQL Server releases.

As you think about this, you also have to keep in mind that there are some important differences in the release cadence based on the different market segments that Intel serves. Tock releases show up first for the high-end mobile and desktop market, and then for the entry-level server and workstation market about two-three months later. After a delay of another three-twelve months, you will see a new Tock release show up in the two-socket server market, and then sometime later (anywhere from three to eighteen months), you will see that same Tock release show up for the four-socket and larger market. These time-frames will also vary based on how much competitive pressure Intel is getting from AMD (which is not very much over the past several years). Intel sometimes skips releases for the four-socket market. For example, there was no Sandy Bridge-EX.

Table 1 shows a “family tree” for Intel processors from 2006 to 2016. The Tock releases are the darker bands in the table.

I did a little searching for different Tick-Tock images, from oldest to newest, so that you could see the history of this development model over a longer period of time. 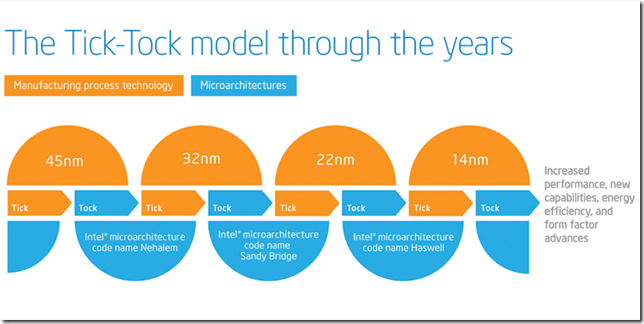 If you would like some more low-level detail about these trends, you should take a look at this presentation that Mark Bohr gave for IDF2012.

Posted in: Intel, Processors
Be the first to Reply!