About a year ago, I built a high-end desktop (HEDT) workstation based on the then, top-of-the-line 14nm AMD Ryzen Threadripper 1950X processor. This is the machine that I use for most of my daily work. I have been quite happy with it over the past year.  Here are the main components that I used to build this system:

By design, the system used 100% PCIe 3.0 NVMe NAND flash or Intel Optane storage. All AMD Ryzen Threadripper processors support 64 PCIe 3.0 lanes (with 4 reserved for the chipset), so I wanted to take advantage of that to get excellent total storage performance. This system has 16 physical cores (32 threads), 96GB of RAM, about 3.7TB of storage, and 10 Gbps Ethernet connectivity. It has two empty memory slots, so I can easily go to 128GB of RAM.

On August 31, 2018, AMD released the second generation 12nm AMD Ryzen Threadripper 2950X processor (AnandTech has a great review here). This processor uses the improved Zen+ microarchitecture that offers the Precision Boost 2 and XFR2 features to more aggressively boost more processor cores more quickly, based on available voltage and operating temperature. There is about a 3% IPC improvement and some minor base and boost clock speed increases.

After waiting a bit, I managed to find an “open-box” special for an AMD Ryzen Threadripper 2950X for $765.00 at my local Micro Center, where it looked like someone had purchased the processor, opened the box, but they had not actually installed the processor (since it had no thermal grease residue or even any fingerprints on the heat spreader). Normally, Micro Center sells that processor for $849.99, which is $50.00 less than Newegg or Amazon.

While I was at it, I swapped out the original NZXT Kraken X62 CPU cooler for a Noctua NH-U14S TR4-SP3 CPU cooler, that was actually made for the huge Threadripper CPU size. This Noctua cooler is quieter than the old cooler, and it keeps the CPU roughly 20 degrees Celsius cooler, both at idle and under a full load. The temperature difference is important for the XFR2 feature, which boosts the clock speed of more cores more aggressively if you have a high-end CPU cooler.

The CPU-swap went even more smoothly than I expected. The hardest part was removing the old NZXT CPU cooler and its associated wiring. I was expecting to have to go into the BIOS setup during the first boot and confirm a CPU change, and then I expected that Windows would also want a reboot. I also thought I might even have to re-activate Windows 10 because of the new CPU, but none of this was required. The system booted right into Windows 10 Pro for Workstations with no complaints at all.

Benchmark Scores After the Upgrade

Here are the old and new CPU-Z and Geekbench 4 scores for this system.

Subjectively, the system seems noticeably quicker for everyday common tasks. It’s hard to say how much of that is because I want the system to be faster after the upgrade…

Economically, its hard to make the case for this particular upgrade. If I sell the old Threadripper 1950X, that would make it much easier to justify. Another argument is that AMD is planning on maintaining full backwards compatibility with existing AMD X399 motherboards when the 7nm Zen 2 Threadripper processors are released in mid-2019. 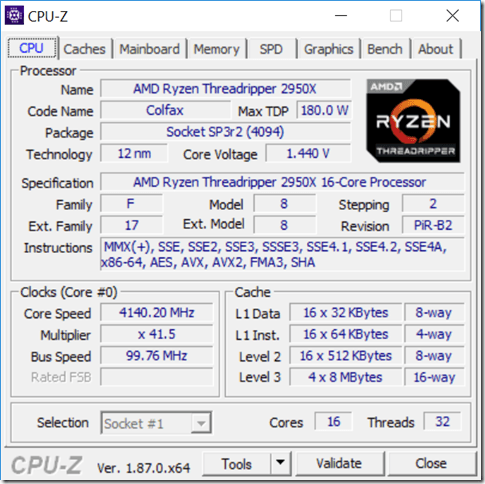 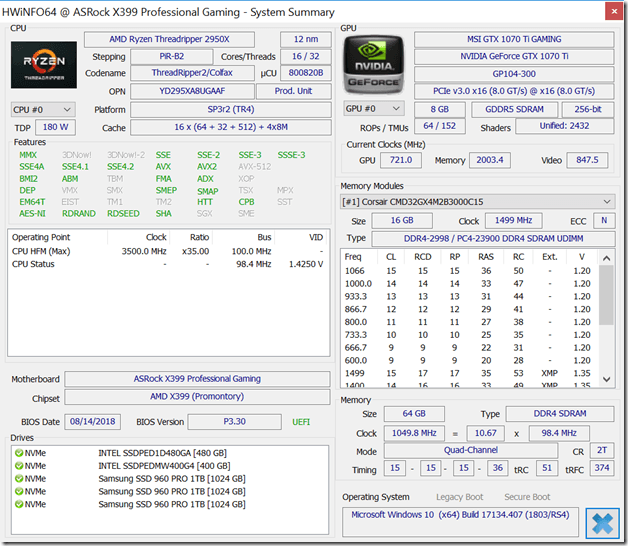 Here is an AMD diagram of the architecture of the processor. 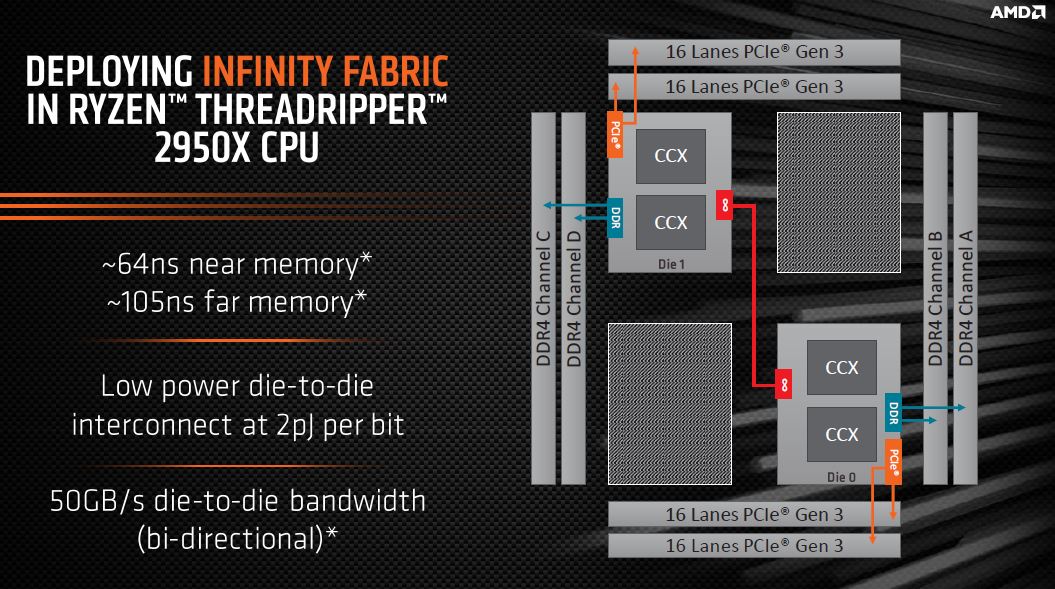 I really think that an AMD Threadripper system is the best choice for a general purpose, HEDT workstation, especially from a performance/dollar perspective. Intel still has a small single-threaded performance advantage with some of their processors, but the gap is pretty close now. You will have to spend quite a bit more money to get a comparable Intel-based system.