On November 21, CPU-Z 1.78 was released. This is a great tool for getting all the technical details about your processors and checking on their current clock speed.

The main improvement in this version is support for Intel Kaby Lake processors, which are already available in the mobile space. It looks like the desktop version of Kaby Lake will be released at CES in January. Tom’s Hardware did some benchmarking of an early sample of a Core i7-7700K that someone supplied to them, as detailed here. 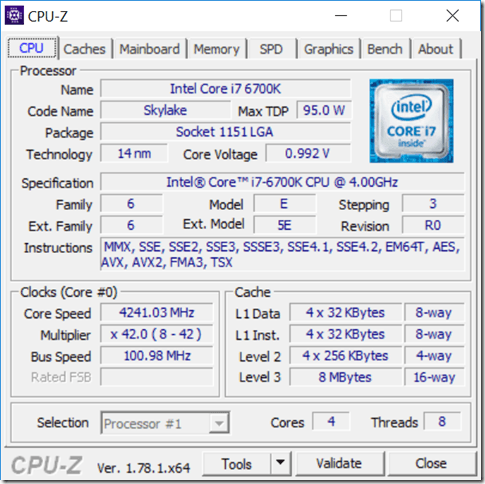 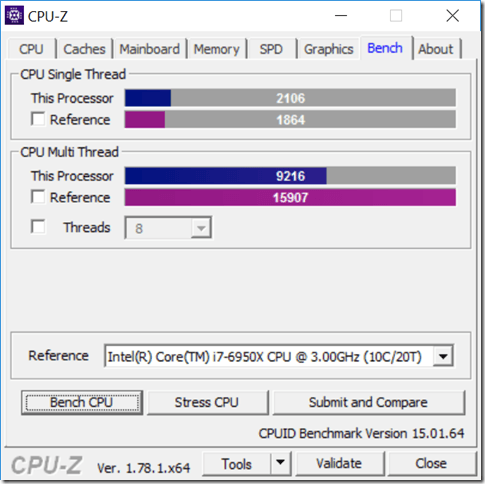 First, you can get a quick gauge of your single-threaded CPU performance (which equates to the “speed” of the processor), and your multi-threaded CPU performance (which equates to the CPU capacity of the entire system). This is useful for comparing different processors and systems, whether they are physical or virtual. You can measure the performance of a VM versus running bare metal on the host, or you can measure different VM configurations. You can also compare your numbers to the built-in reference processors, or submit your results and compare them to other systems results that are stored online.

Second, you can use the Bench CPU button to briefly stress your processors, and then quickly switch to the main CPU tab while the test is running, to see what happens to your CPU core clock speeds, in order to understand whether you have power management configured correctly to get the performance benefits of Intel Turbo Boost.

Posted in: Benchmarks, Processors, Skylake
Be the first to Reply!