Deciding What Processor to Choose for SQL Server 2012

If you have read my SQL Server Hardware book, watched my Understanding Server Hardware course on Pluralsight or ever heard me speak at a conference, you are probably aware of my very strong advocacy for modern, two-socket Intel-based database servers for many database server workloads. I make this argument because of the excellent single-threaded processor performance, high memory density, and high I/O capacity possible from the latest two-socket servers that are available from all of the major hardware vendors. Because of the much higher sales volume in the two-socket server space (compared to the four-socket and above space), Intel refreshes their two-socket capable processors much more frequently than the processors for higher socket count systems.

Table 1 shows the Tick-Tock release cadence for Intel processors from 2008 through 2016. The dates are obviously more speculative as we go further into the future, since Intel may decide to slow down their release cycle if AMD is unable to give them more viable competition in the next few years. 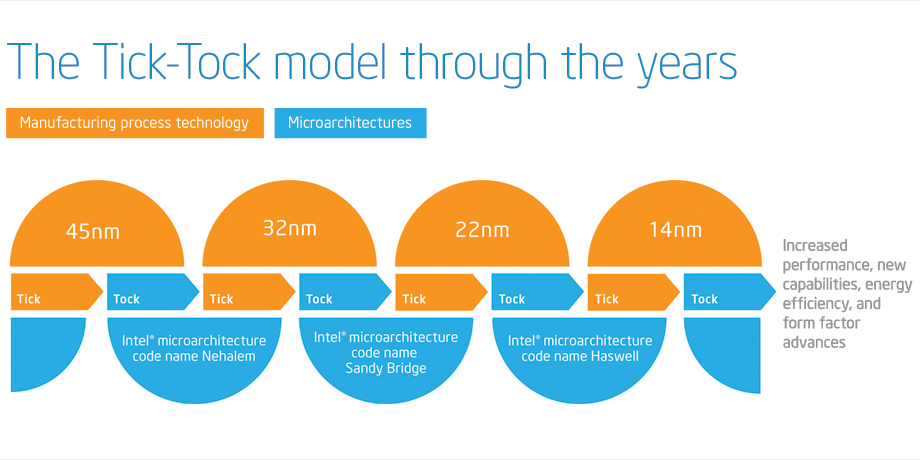 As you can see from Table 1 and Figure 1, Sandy Bridge is a Tock release that came after the Westmere Tick release. The Xeon E5 product family is Sandy Bridge-EP, which is a newer microarchitecture compared to the Xeon E7 product family, which is Westmere-EX. This difference is very important for SQL Server 2012 core-based licensing purposes! Sandy Bridge has significantly better single-threaded performance compared to Westmere and it also has lower physical core counts. Sandy Bridge-EP is available for both two-socket and four-socket servers, while Westmere-EX is available for two-socket, four-socket, and eight-socket servers.

Table 2 shows the TPC-E scores for five systems that use the the five different Sandy Bridge and Westmere processors that I have been discussing so far. It shows that the two-socket Xeon E5-2690 system has the best single-threaded performance, (when you divide the raw score by the number of physical cores) and that the four-socket Xeon E5-4650 system comes in second place. We also see that the scaling goes down quite a bit as we move from two sockets to four sockets with the Xeon E5 family. If we had perfectly linear scaling, you would expect a four-socket system to have twice the score of a two-socket system that was using the same processor, which is not the case here. Part of this can be attributed to the clock speed difference between the 2.9GHz Xeon E5-2690 and the 2.7GHz Xeon E5-4650.

The four-socket Xeon E7-4870 system has a higher raw score than the four-socket E5-4650 system, but it has 40 physical cores compared to 32 physical cores, which means it will cost significantly more for for SQL Server 2012 core licenses, while it will have lower single-threaded performance. Again, I would prefer a Xeon E5-4650 based system over a Xeon E7-4870 based system for an OLTP workload. You can also see that scaling takes a pretty big hit when you go from four-socket systems to eight-socket systems, even though these are all NUMA-based systems here.

Table 3 shows the same five systems with the SQL Server 2012 Enterprise Edition license cost information added. This shows that a two-socket system with Xeon E5-2690 processors gives you the lowest licensing cost per TPC-E score, while Table 2 shows that it also gives you the best TPC-E score per physical processor core. Unless you must have more than 384GB of RAM (with affordable 16GB DIMMs) or more than 768GB of RAM (with much more expensive 32GB DIMMs), there are not too many reasons to go with a higher core-count system for an OLTP workload.

One possible reason is that you are concerned that a two-socket Xeon E5-2690 system simply cannot handle your total database workload. Two processors with a total of 16 physical cores is simply not enough computing capacity for your workload. Depending on the magnitude of your workload, that may be true. If you are currently running a four-socket or larger system that is more than a couple of years old, that may not be true. Bigger systems are not faster systems, and the total load capacity of two socket systems has increased dramatically in the last year with Sandy Bridge-EP.  If you are convinced that a two-socket Xeon E5-2690 cannot handle your workload, I would look at a four-socket Xeon E5-4650 system, which also lets you go up to 1.5TB of RAM with 32GB DIMMs.  Keep in mind that both Xeon E5-2690 and Xeon E5-4650 systems have PCI-E 3.0 support, which gives you twice the I/O bandwidth of the older PCI-E 2.0 standard found in Westmere-EX servers.

If all of this has made your head hurt, you can always contact us for some deeper hardware consulting!