Unless you are a hardware enthusiast, you might be wondering what these instructions are and how you can determine whether your processor supports them or not. First, we have some basic definitions:

This is yet another reason to use a new server when you upgrade to SQL Server 2016 (which is a good idea anyway for lots of other reasons).

Advanced Vector Extensions 2 (AVX2), is a newer version of AVX that was introduced with the Haswell-EP/EX architecture. If you have a Haswell-EP/EX or Broadwell-EP/EX processor, then you will have AVX2 support.

Streaming SIMD Extensions (SSE) are a much older instruction set that were introduced back in 1999. Since then, there have been several newer versions such as SSE2, SSE3, SSE4.1, and SSE4.2. The latest SSE4.2 version was introduced in the Nehalem-EP/EX architecture, which came out in Q1 2009 and Q1 2010 respectively. This means that the Intel Xeon 5500 (Nehalem-EP) and Intel Xeon 7500 (Nehalem-EX) Product families are the oldest models that will have SSE4.2 support. From Bob’s post, it appears that the same code path in SQL Server 2016 will be used if you have any version of SSE (but you don’t have AVX or AVX2 support), so even much older Xeon processors will have some level of SSE support. Just to be clear, AVX and AVX2 are newer and better than any version of SSE.

The CPU-Z utility shows the various extension instructions supported by your processor. As you can see in Figure 1, the Intel Xeon E5-2690 supports the AVX instruction set. 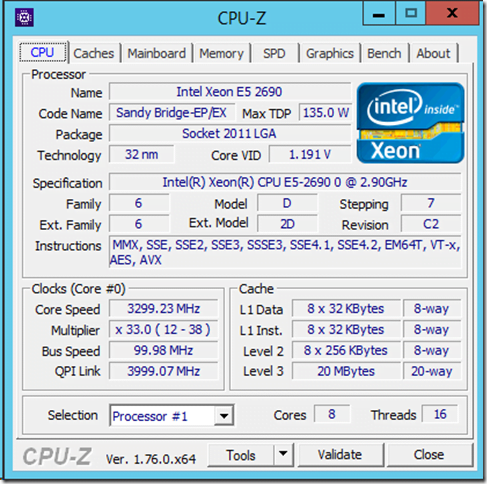 A current model Intel Core i7-6700K Skylake desktop processor supports the newer FMA, and Transactional Synchronization Extensions (TSX) instructions, as shown in Figure 2. These were both introduced with the Haswell microarchitecture, and they might be useful in a future version of SQL Server, if Microsoft decides to use them. 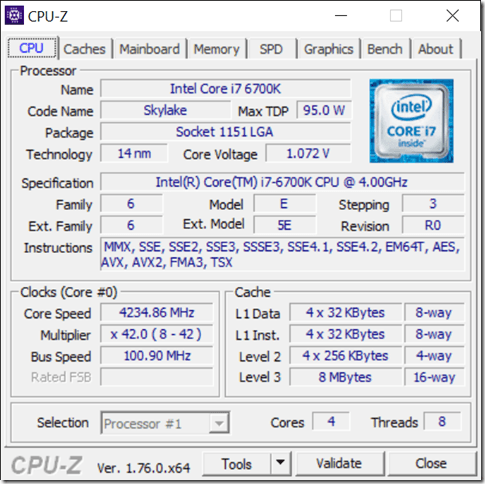