How to Handle Power Grid Failure

On March 13-14, 2019, most of eastern Colorado experienced a pretty severe blizzard. A blizzard is when you have snow combined with sustained winds of 35 mph or more that last for three hours or more. This storm was unusual because it was characterized by extremely low barometric pressure. Lamar, CO had an official reading of 970.4 millibars, which may be the lowest in Colorado history. The lower the barometric pressure, the more severe the storm typically is. A storm like this is more serious when you have a power grid failure.

You may have heard this storm called a “bomb cyclone”, which is a reference to bombogenesis. Bombogenesis is when you have a pressure drop of at least 24 millibars in 24 hours. The weather station at my house recorded a low of 979.3 millibars around 10AM on March 13, 2019. You can convert from inHg to millibars by multiplying inHg times 33.8637526.

I get my electricity from Intermountain Rural Electric Association (IREA). IREA is an electric distribution cooperative that covers 5,000 square miles in Colorado. They buy power from Xcel Energy and the Western Area Power Administration. They also buy some solar power from the 13-megawatt Victory Solar facility in Bennett, CO. Unfortunately, they also own 25.3% of Comanche Unit 3 in Pueblo, CO. Comanche Unit 3 is a 750-megawatt coal-fired generation plant in Pueblo, CO that went online in 2010.

I don’t like IREA. Until recently, they were extremely hostile to renewable energy, especially residential solar PV electricity. Unlike most utility companies, they have never offered any rebates or incentives for energy efficiency upgrades. This includes things like getting energy efficient appliances, upgrading insulation, getting a solar PV system, etc.. None of this is encouraged or incentivized by IREA.

IREA also used to include a regular screed in their monthly newsletter about the folly of renewable energy. It was too expensive, it was too unreliable, IREA had a multitude of objections. They have finally stopped doing that, giving in to the changing economics of renewable energy.

We lost power twice on March 13, 2019. The first time was for about two hours from about 12PM till 2PM. That was not a big deal. Due to my preparations, we got through that with not much of a problem. The second outage was 16 hours, from about 5PM until about 9:30AM on March 14, 2019. That was less fun, due to the length and the time of day (and night) that it happened.

Our house is primarily electric. We do have a natural gas fueled water heater and furnace, which both require electricity to actually operate. They don’t have pilot lights, and you need electricity for the furnace fan and the exhaust vent fan for the water heater.

With a typical grid-tied solar PV system, when the public grid goes down, your solar system is automatically shutdown. This happens to avoid backfilling the grid and being a potential safety hazard to utility workers. This means you have no power at all when the public grid is down.

You can get special model inverters that have a dedicated “secure power supply” that lets you flip a switch during a power outage. If the sun is up, (after a short delay), you can then pull up to 1500 watts from two dedicated outlets next to each inverter. This would let you run a decent amount of stuff during the day during an extended power outage (like a zombie apocalypse). It would not have helped last night, since it was dark. This video explains how it works:

IREA limits you to a 10KW or smaller solar PV system. By Colorado state law, IREA has to offer net-metering, which means that when your solar system is producing more electricity than you are using, your electric meter will run backwards. IREA will track your net metering credits (on an annualized basis). They settle up every May, and issue a bill credit for your net metering credit for the year. Settling up in May is the worst time of the year for the consumer, coming pretty soon after winter.

IREA charges $10.00 per month to be connected to their system. Our solar PV system generates more electricity than we use just about every month. The exception is December and January, because of the shorter days and the sun being lower in the sky. The annual net metering credit is usually about $90.00, so we usually pay about $30.00/year for electricity.

Even with SPS inverters, residential solar PV by itself will not get you through an extended power outage unless you have storage. You won’t get any solar power production at all during nighttime. Your production will also be lowered by bad weather, especially if you have snow on your panels. So far, I have some very limited energy storage capability. This includes:

The APC and Cyber-Power UPS units both have about 216 watt hours of storage each. The DeWalt Portable Power Station has about 400 watt hours of storage. This means that I only have about 1480 watt hours total (nearly 1.5 kWh). So, I could run a 1500 watt load for about one hour, or a 100 watt load for about 15 hours. That really isn’t enough capacity for most purposes, but it is better than nothing!

In my case, I was able to keep my Arris SB8200 cable modem and ASUS router going through the entire outage. I was also able to keep our two cell phones charged. We had regular internet until Comcast’s neighborhood equipment probably exhausted their batteries sometime while we were sleeping.

Once the sun came up on March 14, I was able to pull power from my SPS outlets on one inverter in order to start charging most of the UPS units and the DeWalt Portable Power Station. I was also able to turn on a small electric heater plugged into the other inverter. 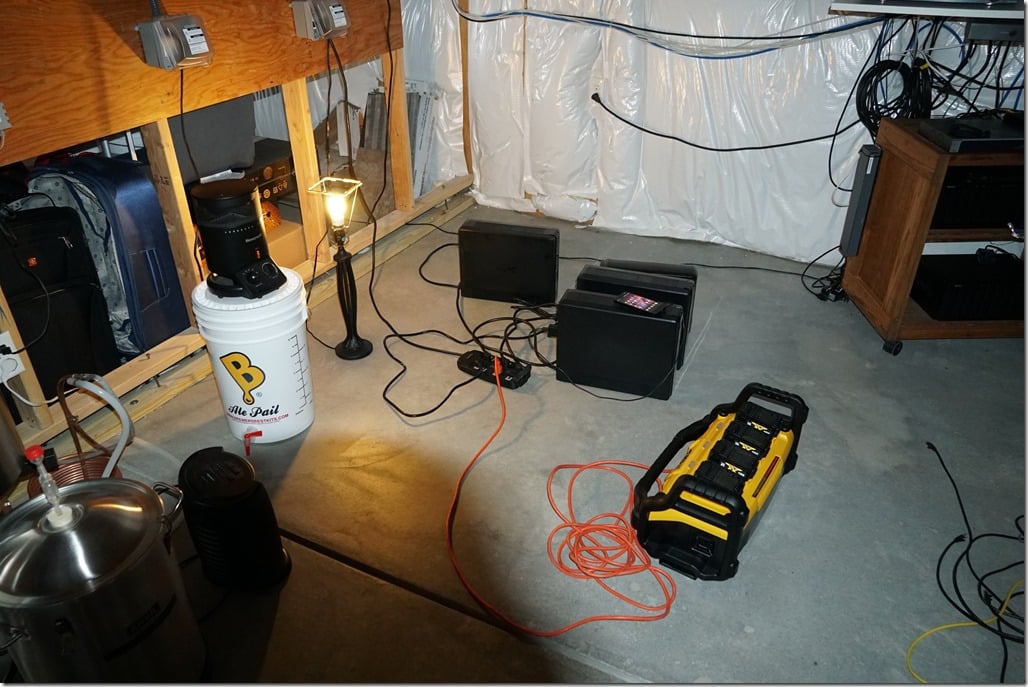 Luckily, the grid power was restored mid-morning on March 14. If this hadn’t happened, we could have probably limped along for an extended period, not being very comfortable. As it was, our interior house temperature got down to 55 degrees Fahrenheit after 16 hours with no heat. This was while it was 18 degrees Fahrenheit outside. Our house is very well insulated, with R-54 in the ceiling and about R-40 in the walls. We were losing about one degree per hour, which wasn’t too bad.

My Tesla Model 3 was sitting in the garage with a fully charged battery. Over time, it would lose its charge since it automatically keeps the battery pack warm enough to protect the batteries. When the house got too cold to bear, we could have slept in the Tesla with the seat heaters on. If I had a long enough heavy-gauge extension cord (which I don’t), I could have also slowly charged the Tesla from the SPS outlet during daylight hours. Officially, you are NOT supposed to use any type of extension cord to charge a Tesla.

Well, I don’t have enough energy storage to deal with an extended outage, especially during a blizzard in the winter. I knew that, but this experience reinforced that knowledge. I can keep a small amount of electronics going during the night, and recharge my storage during the day. I also have enough power generation during the day to do a little bit of electrical heating. But that isn’t enough to stay very comfortable.

On the other hand, my current setup can deal very well with short electrical outages. All of the UPS units are mainly there for surge protection and line conditioning. The battery capacity is just a small bonus. So what can I do about this?

The cheapest solution would be a gasoline powered generator, hooked up to a transfer switch. But then I would have to be storing gasoline, and rotating it to keep it from going bad. Plus, I would probably only have a few gallons on hand. I could also siphon gasoline from my wife’s car, but her tank is only about 13 gallons.

Another solution would be a natural gas powered generator from somebody like Generac. This would work as long as you had natural gas. 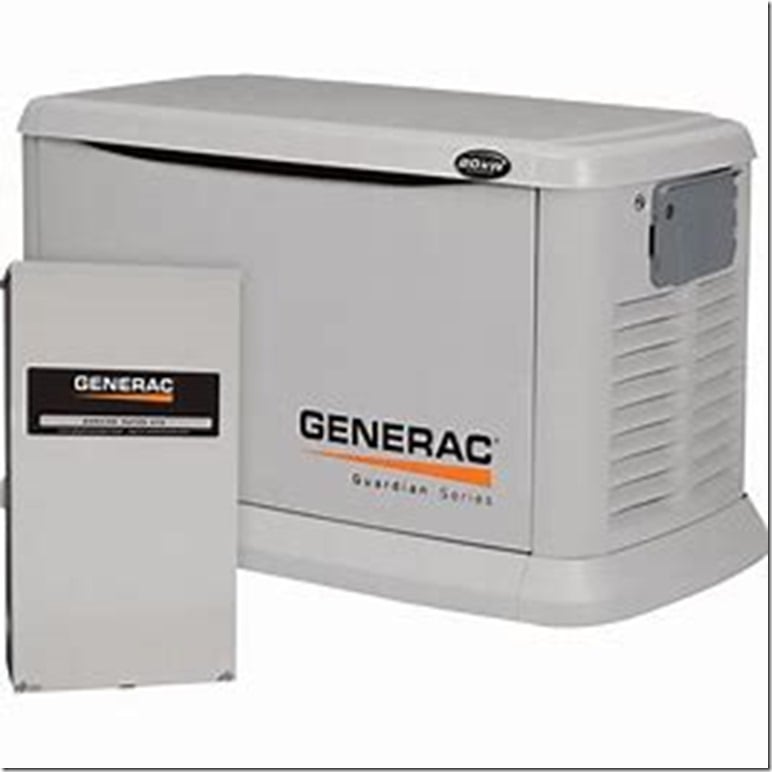 The high-tech, expensive solution is a couple of Tesla Powerwall 2 units. These are 13.5 kWh battery packs with their own inverters. You can use these with or without solar PV. If you have solar PV, it will charge the Powerwall(s) first, before going back to the public grid. When the public grid goes down, you automatically pull energy from the Powerwall until it is exhausted. If you have solar PV, you will run off of that during the day, and then draw from the Powerwall during the night. This would be the most environmentally friendly solution, which is important to me. 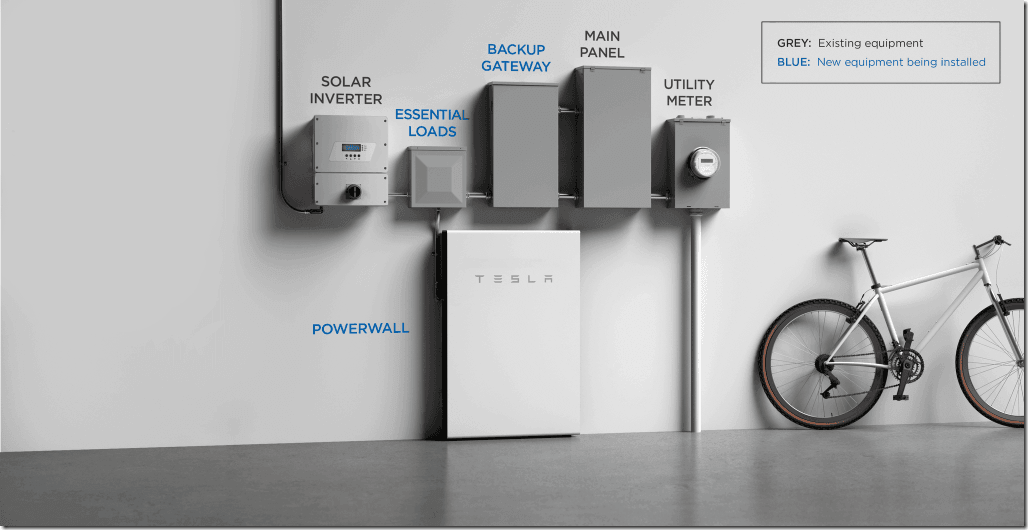 Figure 4 shows how this works.

The Tesla app that I already use for my car also lets you monitor your solar system and your Powerwall units. 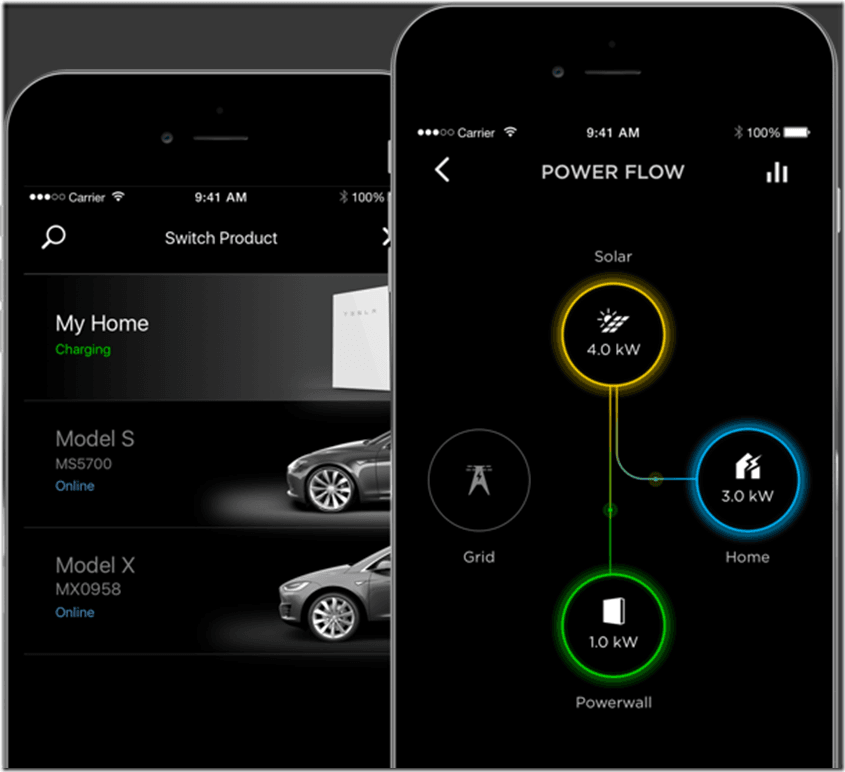 This was an interesting, if slightly uncomfortable experience. It was short enough that we did not get truly cold, and we did not lose the food in our refrigerator and freezer. It proved that my limited preparation so far can handle relatively short outages but not longer outages. This is especially true during a winter blizzard which limits your solar production during the day. I also got some real-world experience with how the SPS circuit works.

I am going to make a few small changes and improvements to my current setup, and then decide what I want to do for a much better setup that can handle a longer grid outage. Just like with SQL Server, going through an actual outage teaches you how resilient your system actually is. It also shows where you have room for improvement.

14 Responses to How to Handle Power Grid Failure