Intel formally announced its 9th generation Core mainstream desktop processors on October 8, 2018 at its Fall Launch Event in New York. So far, Intel has announced three members of this new Intel desktop processor family. The prices below are the MSRP prices. Actual street prices are a currently little higher, especially for the Core i9-9900K. Supply is also a little tight so far.

You may have noticed that Intel has dropped hyper-threading (HT) from the Core i7 line. This was is something the Core i7 has always had, and it was one of the main differentiators over the Core i5 line in the past. The lack of HT means a loss of about 25-30% of your overall CPU capacity when you have the same number of physical cores.

All of these new Intel processors have soldered thermal interface material (rather than thermal paste) which will help with heat dissipation. This will let them run more cores at slightly higher (100-200MHz) clock speeds more often. These processors also have hardware-level mitigation for some of the Meltdown CPU exploits. This will give better performance than software or firmware mitigations. 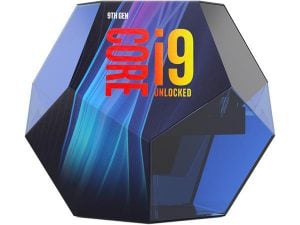 These new processors will all work in existing Intel 300 series chipsets (with an updated BIOS).  Intel is also introducing a new Z390 chipset, which is a very slight improvement over the previous Z370 chipset, primarily with native USB 3.1 Gen 2 support and built-in 802.11ac Wi-Fi support. Here is the list of Z390 motherboards from NewEgg, while AnandTech has a roundup of Z390 motherboards here.

Intel also announced a new generation of high-end desktop (HEDT) processors, which are the Core X-Series processors. The HEDT processors use the LGA2066 socket on X299 motherboards. There are seven SKUs in this family.

These processors are designed to compete with the AMD Ryzen Threadripper HEDT processors. Unlike previous generation Intel HEDT processors, every one of the SKUs in this family support 48 PCIe 3.0 lanes.