About a month ago, I built a new desktop gaming system based on an AMD Ryzen R7-3700X 8C/16T processor. I mainly use that system to play World of Tanks at 2K (2560 x 1440), and this new system has significantly higher frame rates at 2K (typically 95-120 fps) than my previous system. When you are gaming at 2K or 4K, your video card is going to be your main bottleneck, unless your CPU is extremely slow. I am using the stock AMD RGB Wraith Prism CPU cooler, and the only tweak I have done so far is to enable the XMP memory profile in the BIOS so that my G.Skill Trident Z CL15 DDR4-3600 memory is running at full speed.

I previously promised some benchmarks on the new system, so one very quick and easy one is the CPU-Z benchmark. This test only takes about 15 seconds, and it is part of the very useful  CPU-Z utility, which requires no installation. This makes it very easy to run on a system, whether it is a gaming rig or a VM that will be running SQL Server. Figure 1 shows an example result on my AMD Ryzen Threadripper 2950X workstation. 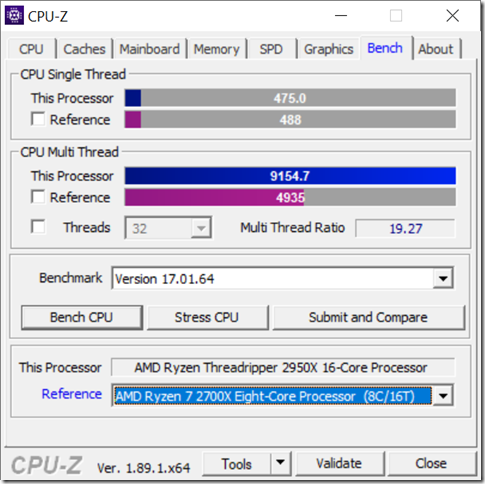 Today, I decided to run the CPU-Z 1.89.1 CPU benchmark on eight different systems that I have around the house. Two of these are high-end desktops (HEDT), three are mainstream desktops, and three are laptops. The ST Score is the single-threaded score, while the MT score is the multi-threaded score.

The oldest system in the bunch is the 14nm Intel Core i7-6700K from Q3 2015, while the newest is the 7nm AMD Ryzen R7-3700X from Q3 2019. My AMD Ryzen Threadripper systems don’t quite have the same single-threaded CPU performance as the mainstream desktop systems, but they do have a lot more cores (and PCIe 3.0 lanes).

Rumor has it that AMD may introduce the 3rd generation Ryzen Threadripper processors as soon as September 7, 2019, supposedly with new X599 motherboards to enable PCIe 4.0 support.