Last week on SQLPerformance.com I blogged about ad hoc workloads and how they impact performance, noting plan cache bloat, and I had a comment asking about SQL Server plan cache limits.  Kimberly mentions them in her classic post Plan cache and optimizing for adhoc workloads, but I thought I’d put the information into a blog post because I always have trouble finding the original references: Plan Caching in SQL Server 2008 (which is still accurate for SQL Server 2019, as far as I know) and Plan Cache Internals.

There are two limitations related to the plan cache:

If you have an ad hoc workload, you’ll often hit the max number of entries before you hit the space limit, particularly if you have the optimize for ad hoc workloads server option enabled, which stores the plan stub for an ad hoc query on initial execution, rather than the entire plan (the plan stub consumes less space, so this is an attempt to reduce bloat).

For pure ad hoc workloads, if you’re seeing SOS_CACHESTORE spinlock contention, you can use trace flag 174 to increase the number of entries to 160,001 per bucket (640,004 total), which is applicable for:

Very rarely, I have seen instances where customers have used trace flag 8032 to increase the total size of the plan cache.  This trace flag uses the plan cache limits for SQL Server 2005 RTM:

The math is below, but note that this can significantly affect the memory available for the buffer pool and this is something I don’t typically recommend…use with caution. 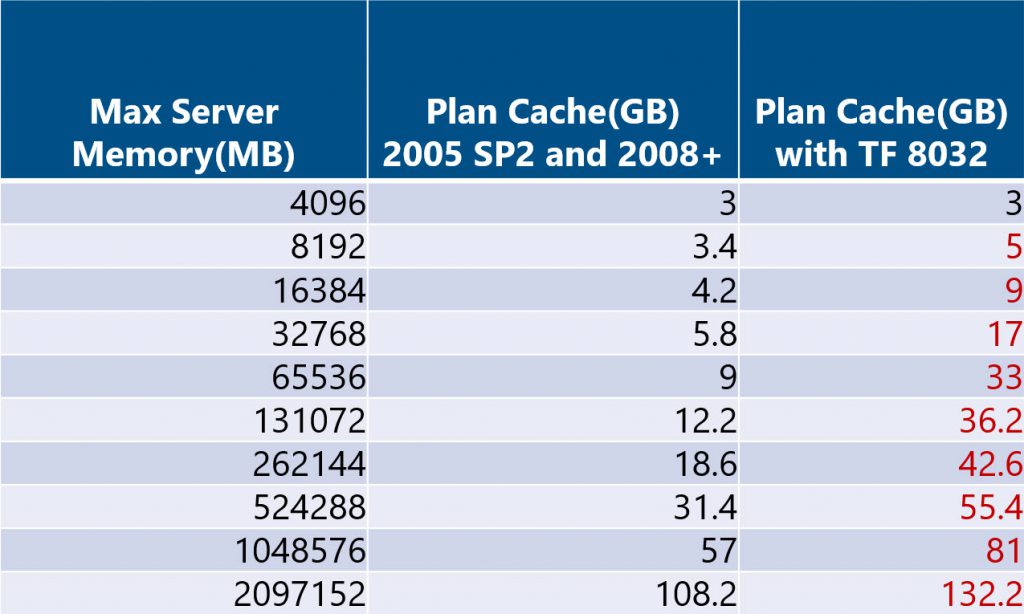 If you’re seeing plan cache bloat due to an ad hoc workload, take note of the space consumed by your plan cache and consider enabling the optimize for ad hoc setting, and possibly enabling TF 174.  Both of those are short term fixes – ideally you look to parameterize stable queries that are executed most frequently to reduce the number of entries in the plan cache.