Totally off-topic blog post this time. I haven’t blogged in a week as we’ve been in Chicago and Illinois for the memorial for Kimberly’s Father (see here). Everything went really well at the memorial and then the ashes scattering in Lake Michigan – perfect sailing weather! The only fly in the ointment came back to backups again. I bought a very cool video camera to make sure we captured the memorial for posterity (actually I probably went a little over-the-top but the HD picture quality is awesome – Canon XA H1). I video’d the whole memorial, and then out on the boat the next day. The only problem was that I didn’t check the tapes before taping on the second day and managed to overwrite half of the memorial video. Should have taken a backup onto my laptop in the evening on the first day but too much rum was drunk in the Columbia Yacht Club in Chicago and I didn’t think to check in the morning. Oops. After we’ve been burned so badly with Kimberly’s computer mishaps (see my diatribe here), you’d think we’d have learned by now…

The last few days we’ve been in Galesburg, IL visiting Kimberly’s Mom and Fort Madison, IA visiting her Grandmother. As a bird-watcher, this was paradise as I managed to pick-up eight new bird species for my life-list. Galesburg is the home of the largest railroad switch-yard in the world, and much as I like trains, it seems like most of the 150+ trains per day that go through Galesburg actually go through at night, making lots of noise as the do so – which doesn’t make for the best sleep.

Here are some pictures from Galesburg… (click for larger versions) 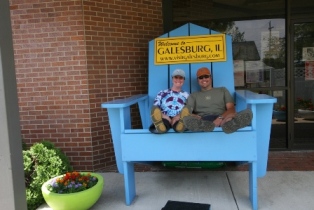 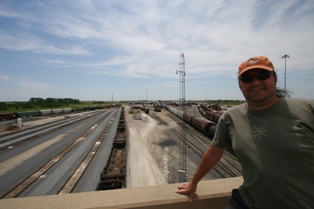 Okay – so why does the title mention movie plots? And why is this blog post filed under the Bad Advice tag? Well, it would be bad advice for me to recommend you go to see Indiana Jones and the Kingdom of the Crystal Skull, which we saw this evening. We’re both *huge* Indiana Jones fans, but this movie was pretty bad. Contrived plot, boring dialog, wooden characters, and a predictable ending. Without giving anything away, the refrigerator scene is totally unbelievable, the accents of the baddies are cliched and awful, and what’s with the cutsie gophers at the start? Well, I enjoyed a few bits here and there but I was ready to leave after about half an hour. I can’t believe Harrison Ford made this movie… Oh well – I’m sure opinions will vary but I think they should have left the series to end with The Last Crusade back in 1989.

Tomorrow we fly home and next week we’re back to work for a little bit before flying out again to TechEd on Friday. And I’ll be finishing up some exciting 2008 whitepapers for the SQL teaam and back to blogging about technical stuff.