(For the hardware setup I’m using, see this post.)

As part of my new benchmarking series I first wanted to play around with different configurations of data files and backup files for a 1-TB database to see what kind of performance gains I can get invoking the parallelism possible when backing up and restoring the database. To do that I need a way to quickly populate a 1-TB database so that I can mess around with different numbers of files and so on. It doesn’t matter what the data in the database is, as backup doesn’t care – as long as there’s a terabyte of it. Why a terabyte? It’s a nice round number, it’s a common enough database size right now, and I have the storage to play around with it.

But then my plans got derailed. In figuring out how to most quickly populate a 1-TB database, I realized that in itself would be an interesting benchmark to explore, so that’s what I’m doing first.

My aim is to give you improvements you can use in real life. If you think this is going to be boring, skip down to the end of the post where I show a detailed perfmon and explain what’s going on in my overloaded IO subsystem, then come back up here :-)

The baseline for this benchmark is contrived – I’m going to populate a 1-TB clustered index (so I can do other experiments with the index) as quickly as I can. The interesting part is that I’m starting with a brain-dead database layout, configuration, and method of populating the table, and then I’m going to alter different things to see the effect on the system. The effects and gains will be the interesting part as it will expose parts of how SQL Server works which *WILL* be applicable to real-life situations and workloads – the whole point of me doing all of this is to show you improvements, why they work, and how they could be useful to you.

When doing any kind of performance testing it’s *essential* to have a baseline with which to compare – otherwise how do you know what effect a variation is having? This post describes my baseline setup, measurements, and limitations I start to notice.

Yes, I’m deliberately putting the data and log on the same RAID array. I *want* to see some contention so I can prove to you how separation of data and log can reduce contention and improve performance sometimes.

I figured the fastest way to fill the database is to have a single table with one row per page, and that having SQL Server create the large CHAR column inside itself, rather than me doing a REPLICATE, would be quickest.

For the actual population of the table, I worked out that 134,217,728 table rows gives me a terabyte, with each row taking up a single 8KB page.

The baseline setup of the table population is:

Yes, I’m deliberately using this method to insert each row. Again, I want to be able to make improvements and see the effect of the changes.

Each connection will be running this script:

%1 in the line above is passed from a master CMD that kicks off number-of-connections CMD windows, each of which just runs the SQLCMD line above.

So – a simple setup.

Here’s a graph of the results: 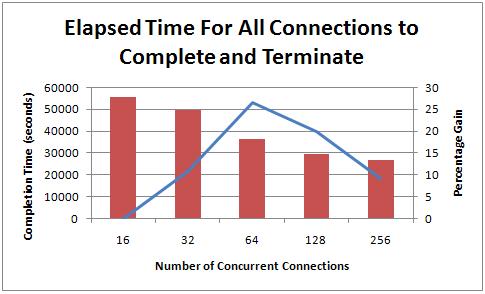 The elapsed times for all connections to complete their work (as there could be up to an hour between the first and last to complete) were: 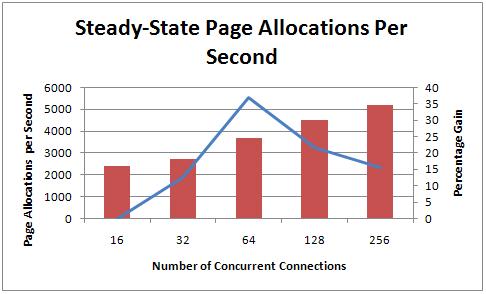 As I’d expect, the pace at which pages are being allocated in the database increases with more threads and the percentage improvements line pretty much matches that of the elapsed time graph above. There’s a slight difference in the 128 and 256 gains here because the graph is show what the perf counter number was after the experiment reached a steady state. I noticed that the log grew enormously for the last few tests, which caused the steady-state number to not be reached for a while. I’ve already blogged about that phenomenon in Interesting case of watching log file growth during a perf test.

I also watched what was happening in perfmon to see if there were any obvious performance problems going on. Here’s a perfmon graph for the 64-way test once it reached steady-state and the log wasn’t growing: 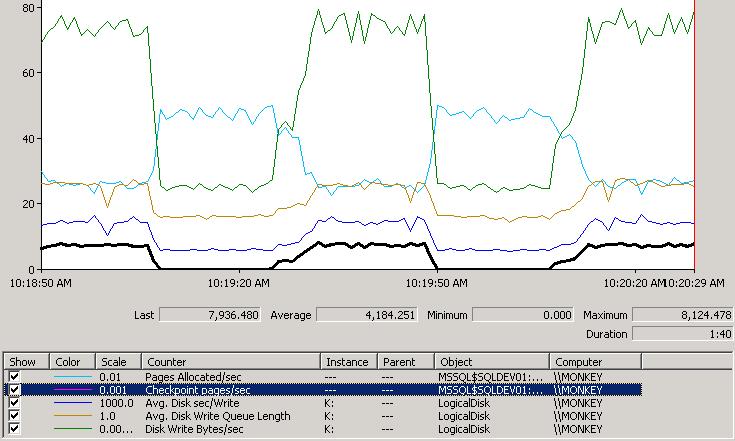 This is what I would expect to see on a system with lots of updates where the log and data are on the same volume. Remember that I’ve got them on a fast RAID-10 array. This debunks the theory I’ve often heard that contention doesn’t matter on RAID arrays. Yes, it does. You can still max out the throughput capabalities of any IO subsystem – it just depends what you’re trying to do with it. Imagine if I had nonclustered indexes on this table too – more logging and more pages being allocated – much worse performance…

So now I’ve got my baseline and there are some obvious things I can try to improve things:

I’m not saying that all of these things are going to help, but over the next few weeks I’m going to try them all and report on the results. You’ll be able to clearly see the effect of changing these on my benchmark, running on production-quality hardware, rather than just taking people’s words for it.

I hope you’re going to find these benchmarks and experiments useful – I’ll be learning (hopefully) as I go along too.

Let me know if there’s anything else you’d like to see me try, and if you’re following along (I don’t want to spend all this time if no-one’s reading the series!)