Importance of having a manageable environment 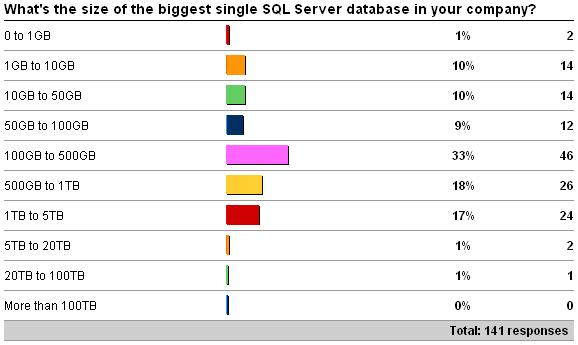 As far as the database sizes are concerned, the distribution curve isn't surprising, but the average size of databases *is*. 70% of respondents have a database over 100GB, with half of those being 500GB or more. One lucky (or unlucky, depending on how you look at it!) person gets to play with a 20+TB database. There some truly huge SQL Server databases out there – for instance the 1.1 petabyte astronomical database described here, which adds 1.4TB every night. Back in December 2003, the largest SQL Server database was a 5TB Verizon database. Now multi-TB databases seem quite common when talking to large customers.

The distribution curve for the number of databases also seems unsurprising, except for the uptick at the 150+ databases mark. Fully 1/4 of respondents are responsible for more than 200 databases! Even if the majority of the databases are small, that's still a huge amount of management to consider and context to have to know about.

So what was the point of this survey? Well, I've heard from quite a few people this year that some of their DBA colleagues have been let go and they've had to pick up more responsibility, whether they want to or not. Just last week, Microsoft laid off 3000 more people worldwide, including some in their various IT departments. In the DBA class we were teaching last week, it was obvious that some of the attendees were affected and had a lot more on their plates.

With the average size of databases growing, and the number of databases any one person is responsible for also growing, it's imperative that the overall environment is as easily managed as possible. What does this mean? Here's a 2-minute list of stuff off the top of my head that I think helps make an environment more manageable:

And I'm barely touching the tip of the iceberg here. Most of these are just database maintenance best practices – with the idea that the healthier a database is, the less likely something will go wrong that demands DBA attention. And in an environment where potentially hundreds of databases are under the control of a single person, avoiding problems is of paramount importance.

Ok – cup of coffee later and I have more stuff to add to the list:

Talking about tools, SQL Server 2008 itself has some stuff built in that can increase productivity. Kimberly did a great post last November on Central Management Servers – see SQL Server 2008 Central Management Servers – have you seen these?. There's also Policy-Based Management, which is a good first step along the road to centralized policy setting, testing, and enforcement (although it has some nits that need to be fixed in v2), and Performance Data Collection which can be used to easily collect perf data (same kind of stuff that Activity Monitor has) for multiple instances and stored in a single location – Kimberly will be blogging more about these two features in the future.

Overall, having a haphazard way of setting up and maintaining databases and instances is going to make it really hard to scale up size and number of databases in an environment without investing heavily in more people. Taking a more disciplined, planned approach, learning from others – using others' scripts and practices, and developing streamlined processes will lead to increased productivity, decreased stress, and happier, stronger DBAs. No-one wants to be in constant fire-fighting mode.

This has been a bit of a ramble, but that's the point of these editorial-style posts. I'm sure you know a lot of this, and I'm sure I've missed some obvious points, so feel free to comment with more tips, tricks, and links!

2 Responses to Importance of having a manageable environment