Way back in the mists of time, at the end of the last century, I wrote DBCC SHOWCONTIG for SQL Server 2000, to complement my new invention DBCC INDEXDEFRAG.

I also used to wear shorts all the time, with luminous orange, yellow, or green socks.

Many things change – I now have (some) dress sense, for one. One other thing that changed was that DMVs came onto the scene with SQL Server 2005. DBCC SHOWCONTIG was replaced by sys.dm_db_index_physical_stats. Under the covers though, they both use the same code – and the I/O characteristics haven’t changed.

This is a blog post I’ve been meaning to do for a while now, and I finally had the impetus to do it when I heard about today’s T-SQL Tuesday on I/O in general being run by Mike Walsh (Twitter|blog). It’s a neat idea so I decided to join in this time. In retrospect, reading this over before hitting ‘publish’, I got a bit carried away (spending two hours on this) – but it’s one of my babies, so I’m entitled to! :-)

DMV is a catch-all phrase that most people (myself included) use to describe all the various utility views in SQL Server 2005 and 2008. DMV = Dynamic Management View. There’s a catch with the catch-all though – some of the DMVs aren’t views at all, they’re functions. A pure DMV gets info from SQL Server’s memory (or system tables) and displays it in some form. A DMF, on the other hand, has to go and so some work before it can give you some results. The sys.dm_db_index_physical_stats DMV (which I’m going to call ‘the DMV’ from now on) is by far the most expensive of these – but only in terms of I/O.

The idea of the DMV is to display physical attributes of indexes (and the special case of a heap) – to do this it has to scan the pages comprising the index, calculating statistics as it goes. Many DMVs support what’s called predicate pushdown, which means if you specify a WHERE clause, the DMV takes that into account as it prepares the information. This DMV doesn’t. If you ask it for only the indexes in the database that have logical fragmentation > 30%, it will scan all the indexes, and then just tell you about those meeting your criteria. It has to do this because it has no way of knowing which ones meet your criteria until it analyzes them – so can’t support predicate pushdown.

This is where understanding what it’s doing under the covers comes in – the meat of this post.

The default operating mode of the DMV is called LIMITED. Kimberly always makes fun of the equivalent option for DBCC SHOWCONTIG, which I named as a young and foolish developer – calling it WITH FAST. Hey – it’s descriptive!

The idea behind this option is to allow you to find the fragmentation of an index by reading the minimum number of pages, i.e. in the smallest amount of time. This option can be magnitudes faster than using the DETAILED mode scan, and it depends on how big the index’s fanout is. Without getting too much into the guts of indexes, the fanout is based on the index key size, and determines the number of child-page pointers an index page can hold (e.g. the number of leaf-level pages that a page in the next level up has information about).

Consider an index with a char(800) key. Each entry in a page in the level above the leaf has to include a key value (the lowest key that can possibly appear on the page being referred to), plus a page ID, plus record overhead, plus slot array entry – so 812 bytes. So a page can only hold 8096/812 = 9 such entries. The fanout is at most 9.

Consider an index with a bigint key. Each entry is 13 bytes, so a page can hold 8096/13 = 622 entries. The fanout is at most 622, but will likely be smaller, depending on operations on the index causing fragmentation at the non-leaf levels.

For a table with 1 million pages at the leaf level, the first index will have 1 million/9 = 111112 pages at least at the level above the leaf. The second index will have at least 1608 pages. The savings in I/O from using the LIMITED mode scan will clearly differ based on the fanout.

I’ve created a 100GB clustered index (on the same hardware as I’m using for the benchmarking series) with 13421760 leaf-level pages and a maximum fanout of 540. In reality, I populated the index using 16 concurrent threads, so there’s some fragmentation. The level above the leaf has 63012 pages, an effective fanout of 213. Still, the LIMITED mode scan will read 213x less than a DETAILED scan, but will it be 213x faster?

Here’s a perfmon capture of the LIMITED mode scan on my index:

There’s nothing special going on under the covers in a LIMITED mode scan – the chain of pages at the level above the leaf is read in page-linkage order, with no readahead. The perfmon capture shows:

The DETAILED mode does two things:

And so it’s obviously the slowest. It has to do the LIMITED mode scan first to be able to calculate the logical fragmentation, because it reads the leaf level pages in the fastest possible way – in allocation order. DBCC has a customized read-ahead mechanism for allocation order scans that it uses for this DMV and for DBCC CHECK* commands. It’s *incredibly* aggressive and will hit the disks as hard as it possibly can, especially with DBCC CHECK* running in parallel.

Here’s a perfmon capture of the DETAILED mode scan on my index: 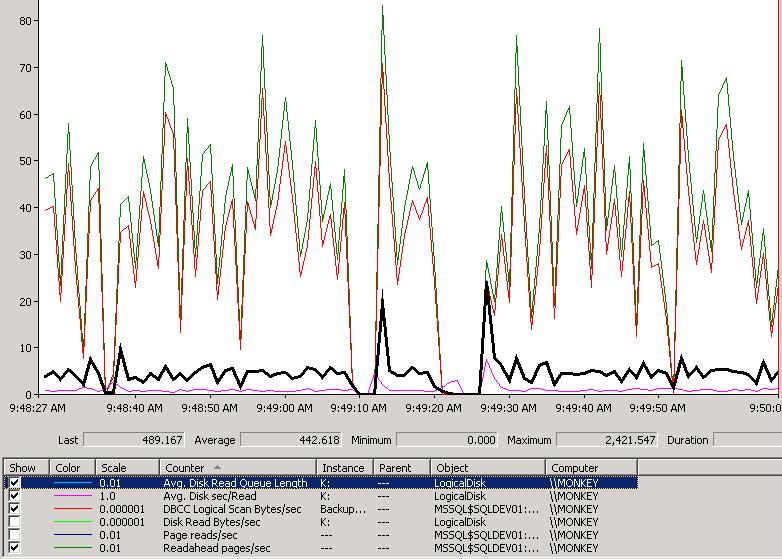 Not quite as pretty as the LIMITED mode scan, but I like it :-) Here’s what it’s showing:

So the DETAILED mode not only reads more data, but it does it a heck of a lot more aggressively so has a much more detrimental effect on the overall I/O capabilities of the system while it’s running.

There is a third mode that was introduced just for the DMV. The idea is that if you have a very large table and you want an idea of some of the leaf level statistics, but you don’t want to take the perf hit of running a DETAILED scan, you can use this mode. It does:

There’s no progress reporting from the DMV (or DBCC SHOWCONTIG) but if you look at the reads column in sys.dm_exec_sessions you can see how far through the operation it is. This method works best for DETAILED scans, where can compare that number against the in_row_data_page_count for the index in sys.dm_db_partition_stats (yes, you’ll need to mess around a bit if the index is actually partitioned).

In terms of timing, I ran all three scan modes to completion. The results:

Just for kicks, I ran a SELECT COUNT(*) on the index to see how the regular Access Methods readahead mechanism would fare – it completed in 3870 seconds – 5% slower, and it had less processing to do than the DMV. Clearly DBCC rules! :-)

Although the DETAILED mode gives the most comprehensive output, it has to do the most work. For very large indexes, this could mean that your buffer pool is thrashed by the lazy writer making space available for the DMV to read and process the pages (it won’t flush out the buffer pool though, as the pages read in for the DMV are the first ones the lazywriter will kick out again). One of the reasons I advise people to only run the DMV on indexes they know they’re interested in – and better yet, run it on a restored backup of the database.

Hope this is helpful!

PS Oh, also beware of using the SSMS fragmentation wizard. It uses a SAMPLED mode scan, but I found it impossible to cancel!

13 thoughts on “Inside sys.dm_db_index_physical_stats”