(This is my last blog post for 2009 – thanks to everyone who reads my blog and takes part in the SQL community – hope you have a Happy and Prosperous New Year!)

Every so often you have to challenge yourself with a goal that actually stretches your abilities and tests your stamina. At the start of 2009 I set myself the goal of reading 50 books during the year. By the time January was over I'd already read 18 books so I upped the goal to 100, thinking it would be easily achievable. How wrong I was!

I'm very proud that I stuck with this through the year and met my goal, finishing the 100th book on December 29th. I deliberately chose the final book to be Scotland: The Story of a Nation, by Magnus Magnusson. He used to be the host of the UK quiz show Mastermind (that I loved as a teenager), and his catch phrase was "I've started, so I'll finish!". An appropriate statement on my undertaking this year!

If you held a gun to my head and forced me to pick from all the book's I've read this year, my #1 favorite book is Cormac McCarthy's The Road (no, I haven't seen the movie). Incredibly powerful, haunting, and ultimately sad book – I get a lump in my throat just thinking about the story and it's ending. If you only read one book next year, read that one.

Overall, it was an excellent experience and I recommend everyone to try something similar at some point in their lives. Many people have expressed an interest in seeing the complete list plus my favorites for the year, so this blog post is my summary for you all (and as a neat way of getting closure for me too). It's divided into three parts: data, top-10, and the complete list.

I hope you enjoy reading this as much as I've enjoyed putting it together, and it inspires you to try some of these books, or even to set yourself a reading goal next year. Do let me know what you think. And I'll leave you with the saying that's governed 2009 for me:

I read a total of 39674 pages, or about 109 pages on average every day, and a book every 3.65 days. Of course some days I didn't read anything and some days I read 500 pages, depending on what I was doing. You might ask – how the hell did you make the time for that with everything else you do? Well, I flew 138000 miles during the year and spent quite a few days sitting by pools in hot places getting on time zones before teaching classes, mostly in India (2 trips) and Thailand (4 trips) – that's a lot of time right there. I made time when at home, reading pages here and there while cooking, taking a break from work, in bed, etc. It also helps that I love reading, and I read quickly (I don't speed-read, or skip sections, every word is read and digested).

Several people through the year poo-poo'd my goal, saying I must only be reading small books, or 'fast reads'. No. I picked a general range from my library (I've got 900+ books – I don't like electronic readers, and one of my favorite past-times is buying books). Here are two charts: the first shows the number of pages in each book, in order that I read them; the second shows the proportion of books in each genre I read. 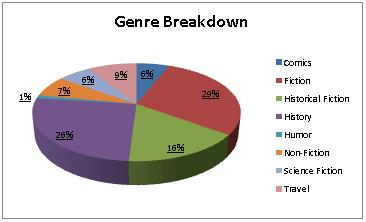 The average book length was 397 pages, and as you can see, I'm a huge history buff, so 42% of all books were either hard history, or historical fiction. Make fun of me for producing charts if you want, I don't care :-)

Now on to the top-10. I tried very hard get down to 10 and couldn't – so you get my top-11. It's just impossible for me to order them so I'll present them in the order I read them, along with a little picture of the cover, and my mini-review from my Facebook page (I always post a little review when I finish a book, the first 3 I read before Facebook got it's evil claws into my psyche). The fact that only one hard history book is on the list does not imply that the others I read weren't good – they almost all were excellent, but just not as hugely entertaining or enthralling as the fiction I read.

#25 The Kite Runner; Khaled Hosseini; 400pp; Fiction; February 14th (From what I remember: My first exposure to life in Afghanistan. Follows the life of a kite-flying boy and his friend in Kabul as it's torn apart by conflict between the Taliban and other warlords. Very well written and highly recommended, as is the sequel A Thousand Splendid Suns that became my #38.)

#29 The Road; Cormac McCarthy; 287pp; Fiction; February 26th (From what I remember: Follows a father and son heading west through post-apocalyptic USA and their encounters with other survivors. As I said above, my favorite book of the year. Incredibly powerful – a masterpiece. Go read it.)

#37 Riding the Iron Rooster: By Train Through China; Paul Theroux; 480pp; Travel; March 30th (From what I remember: I love Theroux's travel writing – his knack for portraying people he meets and irreverent appraisals of places he passes through. In this book he explores the Chinese rail network. I'd love to follow in his footsteps on my next trip to China – been twice, but didn't take any trains.)

#51 The White Tiger; Aravind Adiga; 304pp; Fiction; July 1st (Winner of last year's Man Booker Prize. Excellent story about a driver in India – I can really relate to it after our two trips to India earlier this year being driven around the streets. Quick read – recommended.)

#59 The Enchantress of Florence; Salman Rushdie; 368pp; Historical Fiction; July 25th (My first Salman Rushdie book turned out to be a real page-turner. Excellent story, steeped in 16th Century history of the Mughals and Florence (a real favorite city of mine – planning a week-long trip next year). Richly told story, great twist at the end. Looking forward to reading a bunch more of his, on a UPS truck towards me already :-) Highly recommended!)

#64 Shadow of the Silk Road; Colin Thubron; 400pp; Travel; August 6th (Terrific account of following the 4000-mile Silk Road from Xian to Antioch. Central Asia really seems to be "a paradise or hell of mingled ethnicities" with borders that don't really divide the peoples of the area. Very strongly recommended – although the book has engendered some serious wanderlust in this reader!)

#78 The Name of the Rose; Umberto Eco; 552pp; Historical Fiction; September 21st (I love Eco's works (this is my 4th of his) – they're hugely involved and heavy going to read, with long sections of complex prose. His stories are always involved and erudite, and this is no exception – a murder-mystery set in an early 14th century Italian monastery, amidst the Imperial vs. Papal backed theological struggles of the time. Unfortunately I'd seen the movie so knew the end, but the book was excellent – lots of pithy, syllogistic discussion. Highly recommended, but not for the casual reader.)

#80 The Elegance of the Hedgehog; Muriel Barbery; 336pp; Fiction; September 29th (Translated from French, this wonderful book concerns a concierge of an upper-class apartment building in Paris. She's low-born but very intelligent, which she hides from the vacuous residents of the building. The other major character is a 12-yr old girl, also hyper-intelligent, but unhappy and suicidal, with startling insights on life. Life changes for them both. Beautiful book, highly recommended.)

#85 Sea of Poppies; Amitav Ghosh; 560pp; Historical Fiction; October 19th (I've got a real thing going for writers portraying life in India right now. This book follows the stories of a bunch of people around the time of the Opium Wars, who are linked into the trade in India – both Indians and Westerners. Various calamities befall the Indians and they end up on a schooner, the Ibis, heading down to Mauritius. A very compelling story, expertly told and I'll be picking up some more of his novels from Amazon. Highly recommended.)

#93 The Meaning of Night: A Confession; Michael Cox; 720pp; Historical Fiction; December 7th (Superlative story telling! Been reading this (long) one for a few months on and off. Compelling tale of a man discovering his true origins and trying to win back what is his, with twists and turns along the way – written as a confession from the point of view of the man himself. Dark and brooding, mixed in with life in England in the 1850s. Highly recommended.)

#100 Scotland: The Story of a Nation; Magnus Magnusson; 752pp; History; December 29th (I deliberately chose my goal-meeting final book of the year to be Magnusson's magnum opus: his 700pp work on the history of Scotland. Extraordinarily well-written and comprehensively researched, I strongly recommend this book to anyone with Scottish roots.)

And now, for completeness, here's the entire list of all 100 books I read, with links to Amazon.com so you can explore further.