Personal: And on to Beijing and the Great Wall…

Start of the second week in China. We flew up from Shanghai to Beijing yesterday, and just in time it seems. As we flew out of Shanghai it was being enveloped in a snowstorm. Beijing’s much colder than Shanghai though – being further north and inland quite a way compared to Shanghai.

As I said a few days ago, the last time I was here I stayed in the Jiu Hua International Conference & Exhibition Center Hotel, which has to be one of the worst hotel experiences ever. I remember going to the buffet breakfast one day and picking up a pork bun to find some dead moths stuck to the bottom – that was my breakfast appetite gone for the day. Whenever I had laundry done they demanded cash before they’d give it back to me – no such thing as charging to the room. This time we’re in the Grand Hyatt Beijing which is right in the middle of the city and is far more pleasant. Our room’s not so high as in Shanghai as the height of buildings in the old part of Beijing is limited. Here’s the view from our room this afternoon. (Click on it for a bigger version) 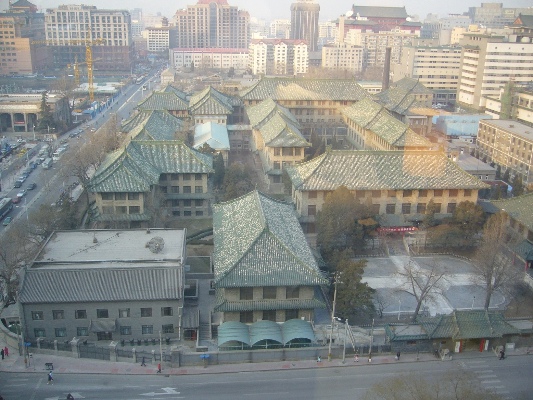 It’s looking out on the Peking Union Medical College Hospital, formerly the Yuwang Residence (what our guide said was a house/palace for a prince). The hotel’s just a few blocks from the Forbidden City and Tiananmen Square, and we can see into the Forbidden City (to the left of the view above). We’re going to do a tour of these on Friday, along with the stunning Temple of Heaven, before catching the late flight back to Vancouver and on to Seattle.

Today was a free day for us so we decided to take a tour out to the Great Wall – something we were both extremely excited to do and somewhere I’ve wanted to go since I was a child. We decided to go to the Mutianyu section about an hour outside Beijing as we’d been told it’s the best section to see – and boy, where they right! The Wall is just *stunning*. Pictures or words don’t do it justice. If you’re ever in the area, I urge you to make time to go if it’s the only thing you see in Beijing. I really think it has to be one of the most (if not *the* most) incredible things I’ve ever seen. Wow.

Well, now it’s dinner time so I’ll leave you with a shot of Kimberly and I on the Great Wall. (Again, click for a larger version.) The wall actually continues on over to the mountains at the top left of the picture – apparently some of the sections of wall are so steep and remote that they haven’t been visited for a *long* time. It’s amazing to think that all the rocks – some weighing up to a ton – were carried up the mountains by hand… 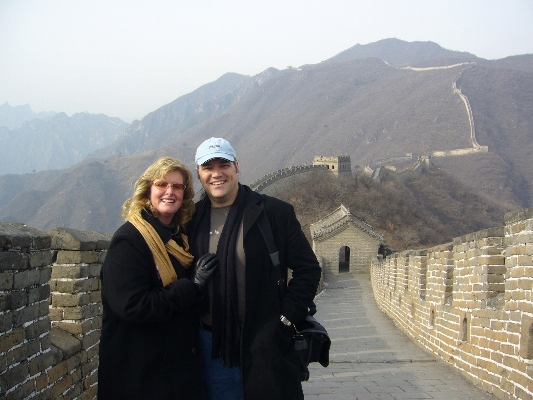 Posted in: Personal, Where In The World Are Paul And Kimberly
1 Comment

One Response to Personal: And on to Beijing and the Great Wall…