Survey results around purchase and use of SSDs

Back at the start of July I kicked off a survey around your plans for SSDs (see here) and now I present the results to you. There's not much to editorialize here, but the numbers are interesting to see. 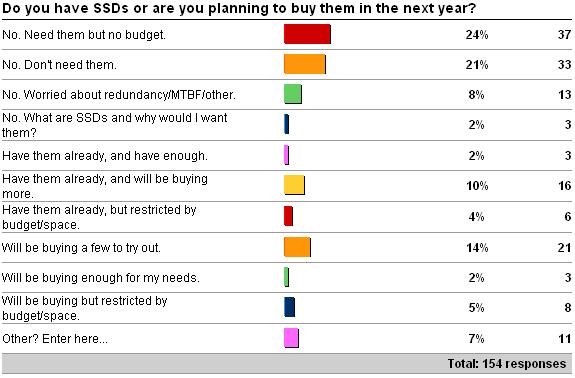 The "other" answers were (verbatim):

The results reflect what I've been hearing when teaching classes and talking to customers/conference attendees over the last six months. People are becoming more interested in SSDs but there's still a lot of wariness about them and of course the whole money issue of being able to buy them. I'm also not surprised (given the general readership demographics of this blog) by the number of people who've analyzed their IOPS requirements and concluded that they don't need SSDs to accomplish that. 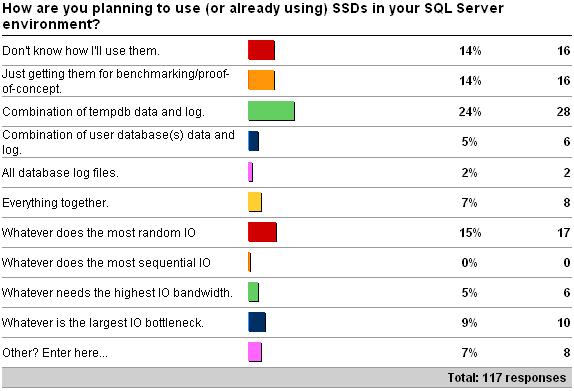 The "other" answers were (verbatim):

Another unsurprising set of results that reflects what I've been hearing. One number I'd be interested in drilling deeper into is answer #3 – are people putting/planning to put tempdb on SSDs because that's what they've heard is the best thing to do, or because tempdb truly is the largest I/O bottleneck that can benefit the most from SSDs? That's a set of experiments I'd like to try out with my Fusion-io drives.

The final "other" answer is also interesting – I was talking to a couple of folks from EMC in Ireland about the V-MAX when we were there earlier this month. Very cool idea to migrate data up and down a set of devices with varying latencies (at the block level, not the file level) – I'd like to see more on how the technology copes with one-off operations like consistency checks or backups – do those IOs affect which layer a block resides in?

Thanks to all those who responded!

5 Responses to Survey results around purchase and use of SSDs