The pros and cons of trace flags

If I told you about an undocumented mod you could make to your car's brakes to make them more efficient, would you try it? What if a random mechanic told you? What if someone who's an expert in your make and model of car told you? What if the car manufacturer asked you to try it to solve a brake problem – and just drive around a bit to see what happens and see if it stops the car crashing again?

A month ago I kicked off a survey about your comfort level with using trace flags in production and now it's time to look at the results. 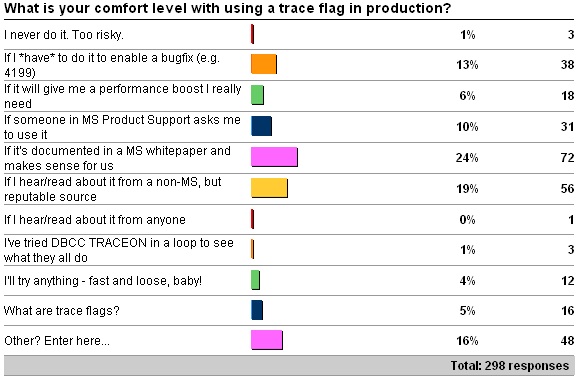 The Other values are:

Trace flags are interesting things. They change the behavior of SQL Server in a huge variety of sometimes useful, sometimes dangerous, and sometimes bizarre ways. There are many hundreds of trace flags, most of which are undocumented – and usually for the very good reasons that they're only supposed to be used for testing, for debugging problems with Product Support, or to enable specific bug fixes that may be detrimental to others.

I never advise turning on a trace flag (either when teaching a class or discussing with a client) unless I'm rock-solid 100% sure about what it does and what the effects are. You should do the same when considering trace flag use on a production system.

The example I like to use is trace flag 661 that disables the ghost cleanup background task. It's documented in KB 920093 and I've blogged about it here (and in a few other posts). It's a very useful trace flag which is safe to use, is documented by MS, is referenced by trustworthy sources (well, me :-) and can give a performance boost under some circumstances. However, it can have horrible side-effects if you don't understand the ramifications of turning it on – deleted data and index records stay around until the next index rebuild/reorganize, leading to page splits and data file growth.

Where trace flags are concerned, you need to test and validate before enabling in production – no matter *who* you hear about it from.

Be careful out there!

9 Responses to The pros and cons of trace flags