Three weeks ago I kicked off a survey about using database snapshots – see here – because I don’t really know how much they’re used or not out in the wild. Here are the results: 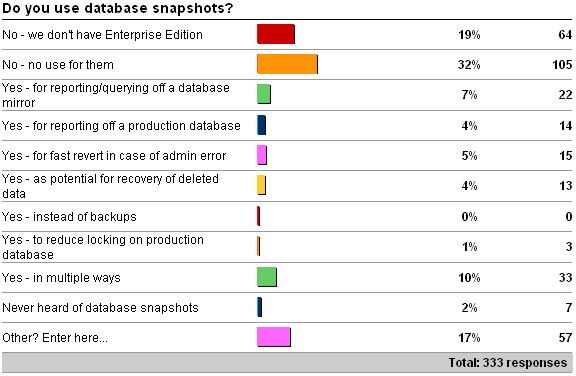 The “Other” values are:

Very interesting! More than 60% of respondents don’t or can’t use database snapshots. I’ve always thought that database snapshots are an under-utilized feature, I’m not entirely sure why though (apart from the obvious Enterprise Edition restriction – lifted in 2016 SP1). It could be some of the limitations of them, such as:

I’m really glad that no-one confessed to using database snapshots as an alternative to log backups! See this TechNet Magazine Q&A column I wrote last year that explains why not.

Rather than repeat what’s already been said about why database snapshots can be useful, I’m going to provide you with some links to further reading: