What’s in a job title?

Just before Christmas last year I created a survey to ask you what your job title is and additionally, if you wanted, what you actually did in your job. See here for the original post.

Here are the results of the survey: 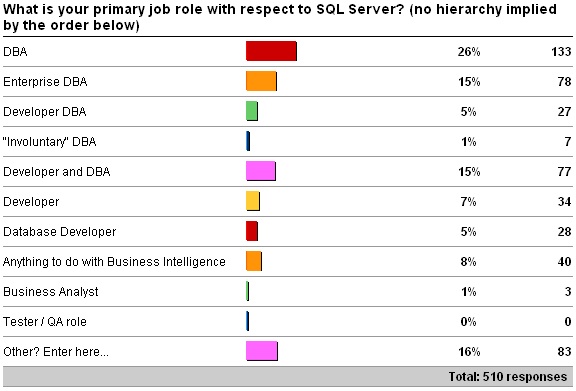 I think that clearly shows the type of people reading my blog – more than 60% are a DBA of some kind – and I’m not surprised, given what I blog about.

The “Other” values were:

WOW!! That’s a lot of different titles for people who all need to understand some facets of how SQL Server works, behaves, and can be tuned.

Here are some of the 40 comments that people left on the original post describing what they do (with names where people put their names for all to see, but I didn’t bother with blog/twitter links this time):

This is some really interesting reading – thanks to everyone who shared a comment on the original post.

It’s very clear that a job title in our portion of the IT industry doesn’t always equate to the actual job duties performed, and nearly always does not imply a strict boundary limit of responsibilities. There are just too many facets of the SQL Server environment and data-tier linked application lifecycle to neatly compartmentalize someone’s responsibilities and provide clear boundaries. I know the demarcation lines have been further blurred over the last few years during the general recession where companies have laid off part of the IT staff and the remaining employees have had no choice but to pick up the extra duties their previous colleagues took care of. I know there are lots of over-worked and stressed-out DBAs/whatevers out there because I deal with some of them at clients I work with. Sometimes that’s a sucky situation to be in, sometimes it makes someone thrive.

But I didn’t want this to devolve into a rant about companies over-working people. I wanted to illustrate with the survey and its results that lines are blurred.

To take the example a little further, what if the badly performing code is because of a design decision that a business analyst/architect made around table structures. Who’s responsibility is it to fix the code? I’d argue that the business analyst/architect should be aware of the ramifications of design choices on how SQL Server will operate and perform. Which comes down to education again.

Very often I see serious enmity between developers and DBAs because of ill-defined or implied responsibilities – or lack thereof – and people lose site of the fact that they’re playing on the same team – the company they work for.

I could boil all of this down to say that anyone involved in dealing with SQL Server needs some education so they can make informed design choices, perform proper testing, perform efficient troubleshooting, and on and on and on… regardless of your job title.

And there’s really no excuse for ignorance these days, with so much information freely available and easily searchable.

Hope you found this an interesting read!

4 Responses to What’s in a job title?