I’ve never been a fan of Halloween. Obviously not because I don’t like candy or chocolate (you all know I like sweets right?).  It’s because I dread the costume. This wasn’t a problem as a kid. My costumes included, in no particular order…

Those were fun times. Then I got to college and Halloween took on a whole new meaning. I am not one to dress up in any tight-fitting barely-there costume, so I resorted to a farmer one year (insert Iowa joke here) and other years just avoided going out all together. Finding something cool was tricky. My friend Jori was awesome at costumes, she still is (last year she, her husband, and their 1 ½ year old went as the Three Amigos…genius). But I digress.

So this year, when Argenis Fernandez asked if I would participate in his second fundraiser for Doctors Without Borders and wear a costume if he raised at least $5000, I of course said yes…knowing full well I would have to find a costume.

I now have a kick @$$ costume if I do say so myself, and you’ll see it at the PASS Summit (I’m speaking on Wednesday at 4:45 PM, if you’re interested!). In the meantime, if you haven’t already, head on over to Argenis’ page and donate to a fantastic cause.   The amount doesn’t matter…$5, $10, $20…whatever. It all adds up, it all helps. Every little bit.  Thanks for considering, and I hope to see you at Summit!

In Support of PASS Board of Directors Nominee Ryan Adams

Reminder: Opinions are my own.

There are four candidates running for three Board of Director positions this year (in alpha order):

You can read more about each candidate through links on PASS’ Elections page here. I do know all four candidates personally – some a bit better than others – and I know that they are all great individuals who have all contributed in numerous ways to the SQL Server Community over the years.

But this post is specifically about Ryan Adams and why he’ll be getting my vote for a Board of Directors position. I support Ryan because I don’t just know him, I have worked with him. I had two opportunities to work closely with Ryan in the last three years on PASS-related teams.

I first got to know Ryan in late 2011 when I took over the PASS Performance Virtual Chapter. I put out a call for volunteers in November 2011 to help run the team. Ryan applied with the intention of managing the web site , but I recognized that he came to the group with a lot of experience already (at that time he was on the board for the North Texas User Group, he was a Regional Mentor, and he was helping to organize SQLRally), and I needed to leverage that. I convinced him to handle marketing for the group, and though we didn’t know each other well in the beginning, our small team came together through regular conference calls. We all had different responsibilities, and we were off and running. We created (in my opinion) a very solid VC over the course of the year. Ryan was an integral part of that success. He created his own goals and figured out how to meet them. He set up new avenues for marketing the VC meetings, and came up with some great ideas along the way, including the Performance Palooza. We held the first one in December of 2012, and the Palooza has continued to this day for the Performance VC (its attendance this year grew 175% compared to last year).

At the end of 2012 I stepped down from running the team, as I had only committed to a year, and I also felt it was good for someone to have another opportunity in a leadership position. Ryan stepped forward without hesitation; he was a natural fit. This was confirmed when we finally met in person at the 2012 PASS Summit for a dinner to celebrate our year, and Ryan was already thinking ahead to 2013 and making plans. Ryan has continued to run that group and it has continued to grow over the years, now averaging 200-300 attendees per session.

I again worked with Ryan in 2013 when we were both members of the PASS Nomination Committee. I was again impressed. The NomCom requires its members to review applications by a specific date, and also attend meetings and candidate interviews. Collectively, we all tried to meet deadlines and attend every meeting – I’m not sure that Ryan missed any. During our candidate interviews Ryan asked thoughtful questions, and provided great insight and evaluation during our follow up discussions. Post-nominations, he gave critical consideration to the process that we went through provided both big-picture and detailed analysis of it, contributing to the changes that occurred for our nominating committee and the next.

In the last three years I have watched Ryan continue to contribute to the community through his volunteer responsibilities and his speaking. He’s become a solid speaker, presenting at many SQL Saturdays and the PASS Summit. He is comfortable in front of large and small groups and has excellent written and verbal communication skills. He has in-depth knowledge about PASS and how it works, which he’s been accruing since he started helping out the North Texas User Group all those years ago. Ryan has the ability to take on projects and responsibilities, take action, and see them through the end. He gets thing done. He has a positive attitude and he’s a critical thinker. I know Ryan would be a solid member of the PASS Board of Directors, and it’s been a privilege to watch him grow as a leader within our community.

Best of luck to all the candidates in this year’s election, and I encourage every voting PASS member to take time to learn about each candidate so you can vote based on data.  Read through each candidate’s page on the PASS site, and if you still have questions, visit the election forum and/or attend the Town Hall and Twitter chat events.  The board makes a lot of decisions that affect the SQL Server community – it’s a good idea to know who’s representing you.

SQL Server upgrades and hard-boiled eggs. What do these two things have in common? Probably nothing, but last week Jon and I were having a conversation about an upgrade I need to do for one of our clients. Now I can’t go into specifics because of the NDA, but I can give you some of the pieces:

It’s a two-node cluster, there are two instances of an older version of SQL Server Standard Edition, they want to upgrade to a recent release of SQL Server, there’s replication involved…and we may or may not reuse the existing servers.

Now, I like talking through different options for this kind of challenge with someone else on the team, and Jon loves this type of thing. I love solving problems, it’s one of my favorite parts of my job. I think that Jon thrives on it. We’ll discuss some project or process and I will have an idea for how to do it, and then three hours later I’ll get another email or a phone call from Jon that starts with, “Well you could also…”

Our conversation about upgrading was interspersed with a conversation about getting into better shape and eating better (yes I’m usually going in three directions at once, aren’t we all?), and Jon mentioned hard-boiled eggs because they are a good breakfast protein. I asked him if he was still buying them already boiled…because he used to do that. He said no (hooray!), that one of his friends now boils them for him in big batches (nice friend!). Then he mentions how difficult it is to boil eggs.

And I’m thinking, “Are you kidding me?” He’s one of the smartest people I know and boiling eggs is a challenge? So I sent him the steps below, which is this which is an adaptation of instructions provided in Cook’s Illustrated (great cooking magazine if you’re interested):

And Jon replies with this (yes I know the image is large, it’s so you don’t have to click on it to read the text! 🙂 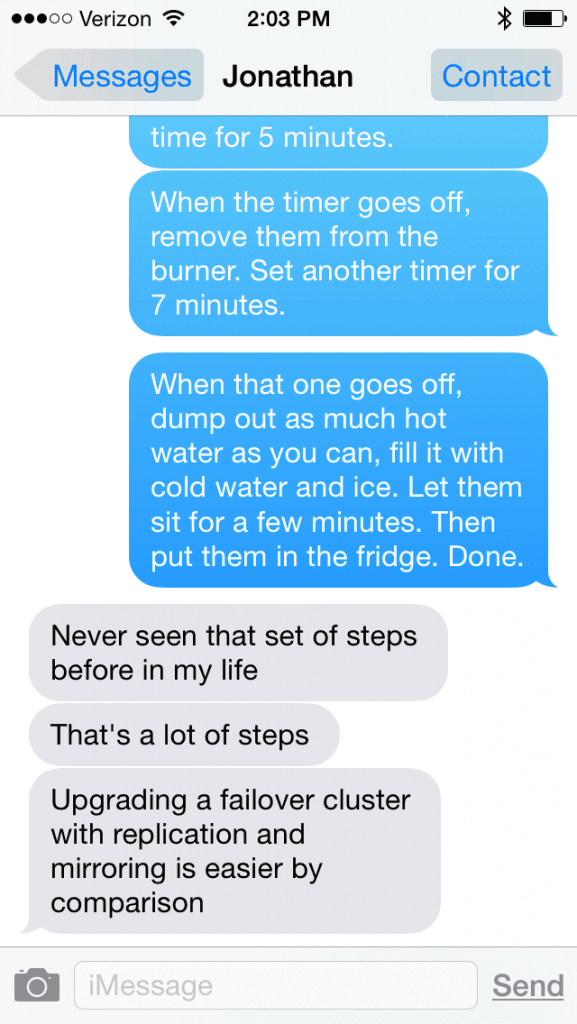 Upgrading is easier than boiling eggs

I laughed. A lot. I was thinking, “I’ll take boiling eggs over an upgrade any day, no matter how much I love SQL Server.”

And then yesterday I decided to boil a couple eggs for breakfast. I put them in the pan with plenty of water and a splash of vinegar, turned on the burner, and then went to my office (just 20 feet away) to work on my Insider Video. Forty minutes later (yes, 40) I remembered the eggs. I forgot to set a timer. I always set a timer, but yesterday I just forgot. I ran to the kitchen…there was about an inch of water left in the pan. I was lucky. Nothing destroyed, the eggs were even edible! But here’s the thing…

It doesn’t matter how many times you’ve done something before, and how well you know the steps involved and KNOW that they work. Sometimes unexpected events happen or a single step gets missed that causes a problem (or a disaster).

Need a real-life example? Jon had a customer that wanted to remove partitioning for a huge table. They had gone through the steps many times in a Test environment, and they were all documented. When it came time to run the process in Production, however, the step to disable the nonclustered indexes on that table before removing partitioning was missed. As a result, the nonclustered indexes (on that extremely large table) were rebuilt three separate times. The step was in the documentation, and had been done during the tests, but for some reason wasn’t done during the process in Production.

So back to that upgrade…we’re still planning for it. If I get approval from the customer, I’ll share the details and let you know how it goes. Until then, keep making those checklists and testing your upgrades. You just never know what’s going to happen.

Posted in: Upgrades
Be the first to Reply!