Another PASS Summit has ended, and again the days and evenings just flew by.  I’m not intending this to be a long-winded post, just some notes and a few highlights.  We’ll see how I do.

First, a huge thank you to those of you who attended my sessions on Wednesday.  I had wonderful crowds and great questions – it is such an honor to present at Summit, and I so enjoyed both sessions.  If you are looking for the decks and the scripts.  I have sent updated slide decks to PASS (I admit, I tweak them until the very end).  When they are uploaded you can pull them from the Summit site:

As for the demos, they can be found on the SQLskills Resources page, under the PASS Summit 2015 section.  The link is also listed in the slide decks.

A few weeks ago I had mentioned that I was supporting Argenis Without Borders 2.0 by wearing a costume at Summit.  The cool news first: Argenis and Kirsten raised $25,000.  Yes I have the comma in the right place: TWENTY-FIVE THOUSAND DOLLARS.  Ah-mazing.  As for my costume?  I went as Perry.  You may know that I take a stuffed Perry with me when I travel and take pictures of him to send to my kids, so why not dress up as him?  It was great, and huge thanks to Jes (Wonder Woman in the photo below) for the help.  Sadly, you can’t see my orange shoes in these pictures.

Argenis (as Ted) and me 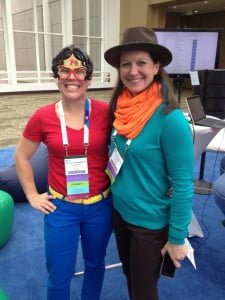 With my sessions finished on Wednesday, I had time on Thursday and Friday to catch up with friends, meet some new people, and sit in on some sessions.  There are some fantastic features coming in SQL Server 2016, and I’ll be making time over the next few months to start working with a few of them, as well as getting better acquainted with recently-released features that are starting to mature.  I am not at MVP Summit this week, which is a bummer on multiple levels.  However, I have been gone for three out of four weeks in October, and being away from my family for another week would have been a bigger bummer.  Life is about choices and balance 🙂

On a final note, I saw on Twitter that David Maxwell was the winner of Speaker Idol, meaning that he will present at the 2016 PASS Summit (to be held October 26-29, 2016).  David has worked hard over the last couple years – presenting at user groups and SQLSaturdays – steadily working to improve and hone his skills and style.  He is a great example of a community member that decided to step up and start speaking, and now he’ll have a spot at Summit next year.  Congratulations David!  And to those of you who have ever sat in a session and thought, “I could do that,” or “I would like to try that,” then let me ask you, “What are you waiting for?”  There are many people in the community who are willing to help new speakers (including me), but you need to take initiative and reach out to them when you’re ready.  Who knows, you could be speaking at Summit, or another conference, down the road.

For those of you that were at Summit, I hope you catch up on sleep and email in the next couple days, and I hope to see you again next year!