(Glenn’s Tech Insights used to be part of our bi-weekly newsletter but we decided to make it a regular blog post instead so it can get more visibility. It covers interesting new hardware and software developments that are generally relevant for SQL Server).

Market analyst firm DRAMeXchange, expects DDR4 Server DRAM prices to decline by roughly 30% in Q1 of 2019. They also expect another 15% price drop in Q2 of 2019. DRAM inventory levels have been climbing since Q4 of 2018, and most DRAM suppliers are holding a huge six weeks supply of inventory. This trend is should continue until at least Q3 2019.

Intel has 14nm manufacturing bottlenecks that are causing a shortage of processors for some parts of the processor market. This has the effect of depressing demand for DRAM, which puts downward pressure on DRAM prices. This Intel CPU shortage will probably continue for the rest of 2019, even after Cascade Lake-SP is released.

This is especially good news if you are planning any new database server purchases in the coming year.  Ideally, you would do this as part of a data platform upgrade. Checking Crucial.com today, I see 32GB DDR4-2666 RDIMMs selling for $275.99, which is $8.63/GB. That is the lowest pricing that I have seen in 2-3 years. This makes it much less expensive to get an appropriate amount of memory for your database server. 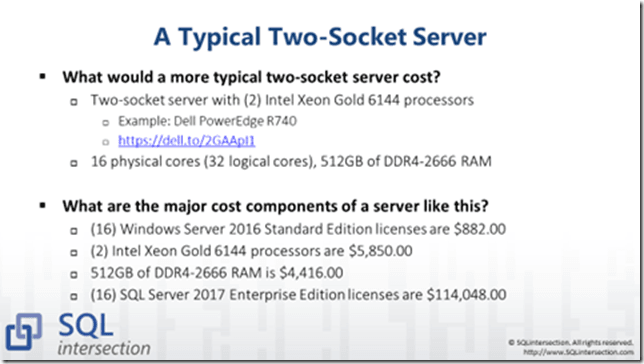 As you can see in Figure 1, the cost of an adequate amount of memory is now one of the lower contributors to the total cost of a database server.

The fact that AMD included the 3rd Generation Ryzen Threadripper processor family of this roadmap very likely means a release date in 2019.

Alternatively, I may be able to build a completely new system with a new motherboard using an X499 chipset (which is only a rumor at this point). There was talk of the X499 chipset being released at CES 2019, but that didn’t happen. If it does happen, I would expect improvements such as PCIe 4.0 support, Thunderbolt 3 support, and better USB connectivity.

This is pretty exciting stuff if you want to see a viable competitor to Intel, both in the mainstream desktop and HEDT space. What do you think about this? I would really like to hear your thoughts!

Posted in: AMD Ryzen Threadripper
Be the first to Reply!