This year the Spring 2014 SQLintersection Conference will be in Orlando, FL at the JW Marriott Grand Lakes from April 12th to April 17, (including the pre-con and post-con workshops). There will be an informal “Ask the Experts” area with many of the speakers, including two Microsoft Premier Field Engineers, – David Pless and Tim Chapman. The idea is that you can bring your own problems and network with other attendees and speakers in smaller, more relaxed setting, where you can actually spend some quality time with the experts.

There are a number of separate, practical tracks on each day for the conference, including things like Performance, Query Tuning, SQL Server 2014, BI Development, Platform Development, Statistics, Workload Analysis, Database Development, Programming, Troubleshooting, Hadoop & Riak, Indexing, and Core Administration. There will also be a number of sessions from Microsoft on In-Memory OLTP in SQL Server 2014, aka “Hekaton”, which I think will be very interesting for a lot of people.

Who are the speakers?

You also get to pick and choose from any sessions from the five co-located conferences on SharePoint, ASP.NET, Azure, Visual Studio, and AngleBrackets while you are at this conference.  Early Bird Bonus: If you register for a Show Package (which is the full conference plus one pre or post-conference session), by February 24, you will receive your choice of a Microsoft Surface 2, Microsoft XBox One, or a $300.00 gift card.

Finally, if you use the discount code of SQLskills when you register, you will get $50.00 off of your registration. 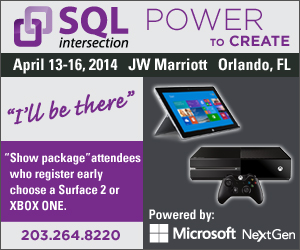