A warning about Diagnostic Manager’s Query Monitor Feature in v9+

During a recent client engagement to look at the performance problems of a production SQL Server I ran into something I hoped to never see in real life. For a long time I’ve been a proponent of Extended Events in SQL Server, and I’ve really looked forward to seeing them used more and more inside of SQL Server for diagnostics data collection, especially by third party software vendors. I’ve done a lot of performance tests comparing Extended Events to SQL Trace and Extended Events generally has lower performance impact to SQL Server performance. However, I have also found and demonstrated how specific events like collecting the actual execution plan with Extended Events can severely impact a server’s performance. Any time Erin or I talk about Extended Events, whether it is at a conference or in our IEPT02 – Performance Tuning class, one of the key things we both repeat to people is that if you see an completely unexplainable drop in server performance and throughput, check for Extended Events sessions and Traces running on the server and look at what events are being collected. For Extended Events we always demo the impact of the query_post_execution_showplan event live to demonstrate why this event should not be used in production environments ever. Yesterday I was incredibly surprised to not only find the event in an Event Session on the affected server, but also to find that it came from Idera Diagnostic Manager’s Query Monitor feature.

If you have Diagnostic Manager 9.0 or higher, DO NOT enable the Query Monitor feature for your servers, without first disabling (uncheck) the box to Collect Query Plans (SQL Server 2008 and up only). If you have the Query Monitor feature enabled, check the properties for all SQL Server 2008+ servers and disable the Collect Query Plans (SQL Server 2008 and up only) then do a Refresh Alerts for the server,  right click the server in the console and click Refresh Server, to force it to modify the event session and remove the query_post_execution_showplan event.  I have already contacted Idera regarding the performance impacts of this event being used in production environments, and have provided images of CPU Usage with the default configuration and after removing execution plan collection, showing reductions of up to 20-25%. I have also been proactively working with clients I know have Diagnostic Manager installed to get their configurations changed to remove the performance impact from any server monitored by Query Monitor in their environments.

How Do I Disable this Event/Feature? 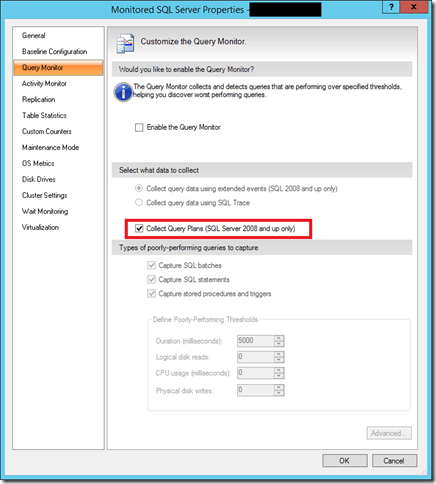 If you simply accept the defaults for the Query Monitor feature, leaving the checkbox highlighted in red above checked, and turn it on for SQL Server 2012 or higher, an Extended Events session called SERVERNAMESQLdmQMEXevents will be created and started on your server that captures the query_post_execution_showplan event. You can examine the entire session for  yourself using the Script Session As… CREATE To… New Query Editor Window option in SSMS (or equivalent DMVs in earlier versions than 2012).

You can also use the Session Properties to see everything it’s doing (just as you can for all sessions created on your server, by any third-party tools): 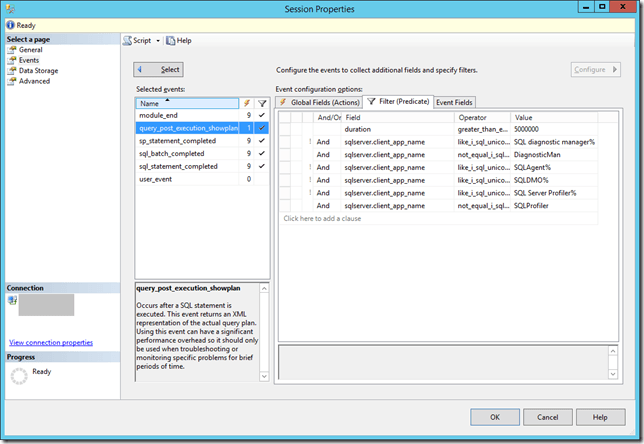 Notice the highlighted event in the screenshot of the event session properties in Management Studio. This is bad! Even though the query_post_execution_showplan event has a duration filter greater than five seconds (5000000 microseconds) the performance impact of the event occurs for every single statement that gets executed inside of SQL Server because the event has to collect ALL of the default data elements, which include the showplan XML, before the predicate is evaluated. There is NO WAY to eliminate the performance overhead of this event because it collects the plan before filtering is applied. This event is one of a handful of events in Extended Events that have a warning about their performance impact in the event description:

Occurs after a SQL statement is executed. This event returns an XML representation of the actual query plan. Using this event can have a significant performance overhead so it should only be used when troubleshooting or monitoring specific problems for brief periods of time.

The purpose of this post is to warn users of the performance impact that this feature has when the defaults are used to enable the Query Monitor against a server, and to at the same time show users how to fix the issue so that Query Monitor can be used to collect important diagnostic information without severely affecting the performance of the servers. I’ve already raised this issue with Idera separately, and I hope to see this event removed from a future update to their product entirely. The performance effects of this event outweigh the cost of having it enabled on production servers, which is why I warn anyone I talk to about Extended Events about this specific events usage in production servers. I think the usage of Extended Events by third party vendors instead of SQL Trace for this type of diagnostic data collection is a good thing overall, but I don’t believe a monitoring tool for performance should ever use an event that can severely degrade performance of a production server.

If you use Diagnostic Manager to monitor your SQL Servers, check the configuration of the Query Monitor feature on ALL SQL Server 2012+ servers and disable the execution plan collection or you WILL have performance degradation from the usage of the query_post_execution_showplan event being included in the event session monitoring your server!