Continuing our weekly series on building a free playground for SQL Server, this week we’ll take a look at configuring our iSCSI Target to create the LUNs necessary to build a SQL Server Failover Cluster, and then build out a two node SQL Server Failover Cluster in the environment.  A number of really good comments have been made by readers on the last two blog posts in this series and I want to call out of of them at the beginning of this blog post because it is fairly important to the environment and a step I skipped covering as a part of the blog posts.

The VM Tools or Guest Additions should be added to each of the VMs that are configured in the playground environment.  This can be accomplished in VirtualBox from the Devices menu with the Install Guess Additions… menu item.

The Guest Additions provide seamless integration between the host environment and the VM guest for things like the clipboard, USB device support in the VM, and mouse integration.

Creating the cloned VMs for the Failover Cluster

The first step in the process of creating a SQL Server Failover Cluster in our playground is to create two new VMs by cloning our template VM.  To do this, use the same steps described in part 2 of this series, making sure that the you check the box to Reinitialize the MAC address of all network cards as a part of the cloning process.  I am going to create two linked clones named SQL2K8R2CLSTR1 and SQL2K8R2CLSTR2 in my environment.  Once the clones have been created, power them on, and follow the same steps used to configure the Domain network of the iSCSI Virtual SAN and join the VMs into the AD Domain.  For this configuration, SQL2K8R2CLSTR1 will be assigned IP address 192.168.81.3 and SQL2K8R2CLSTR2 will be assigned 192.168.81.4 on the Domain network.

Once the VM clones are created, renamed, and joined into the domain using the same steps used to join the iSCSI Virtual SAN to the domain in part 2 of the series the iSCSI network adapters can be setup to begin the process of provisioning shared storage for building out the SQL Server failover cluster.

To simulate an environment with segregated traffic and multiple paths to the iSCSI SAN, we can change the configuration of the vNICs on the iSCSI Virtual SAN, and both cluster nodes to mimic separate hardware networks using the VLANs.  In VirtualBox, this is really easy to do, but simply changing the name of the internal network that Adapter 3 and 4 are connected to.  In this case I am going to change the internal network name from iSCSI Network to iSCSI Network 1 for Adapter 3 and iSCSI Network 2 for Adapter 4 as shown in the below screenshot. 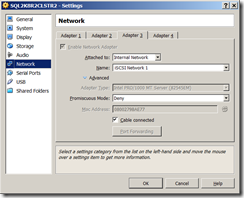 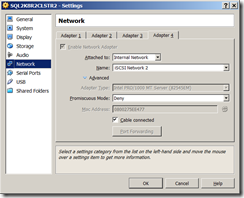 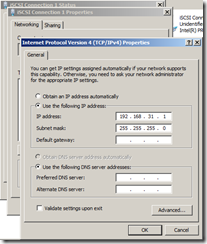 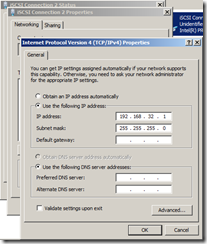 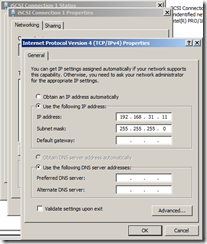 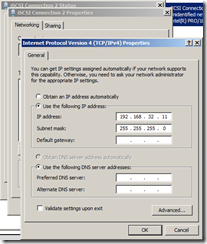 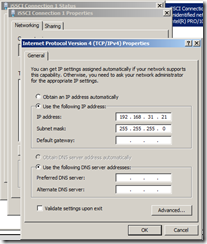 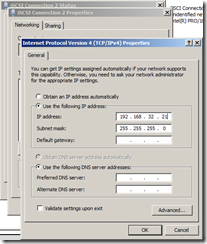 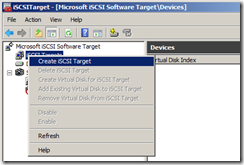 When the Create iSCSI Target Wizard opens click next and then provide a iSCSI target name and Description for the new target.  In this example, I am naming the iSCSI Target SQL2K8R2CLSTR and using a description of SQL Server 2008 R2 Failover Cluster Shared Disks 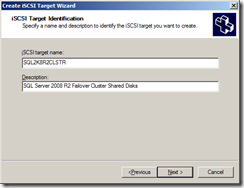 On the iSCSI Initiators Identifiers screen, we are going to click the Advanced button and specify the IP addresses of the iSCSI network adapters we previously configured for the iSCSI Network 1 adapters. 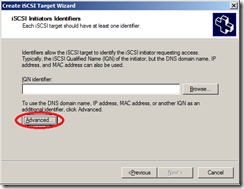 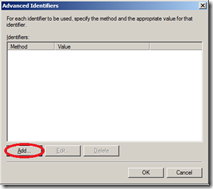 After clicking the Add button on the Advanced Identifiers screen, change the Identifier Type dropdown to IP Address and then type the IP address for the SQL2K8R2CLSTR1 iSCSI Network 1 connection, 192.168.31.11 in the Value box. 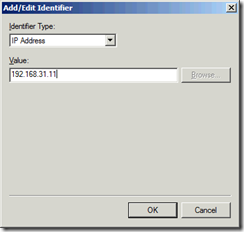 Repeat these steps to configure the IP Address of the SQL2K8R2CLSTR2 iSCSI Network 1 connection, by typing 192.168.31.21 in the Value box.  When the Microsoft iSCSI Software Target warning dialog pops up, click Yes to accept the configuration of multiple initiators for the target.

Then click OK to close the Advanced Initiators dialog, then click Next on the iSCSI Initiator Identifiers window, and then click Finish to configure the target.

When the Create Virtual Disk Wizard pops up click Next and then specify a file location and name in the File box to store the VHD file for the new virtual disk that will be used as the iSCSI LUN for the failover cluster. 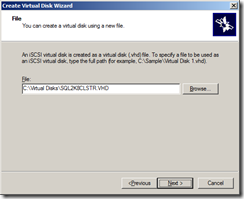 On the Size screen, specify a size for the new virtual hard disk, in megabytes, in this example I am creating a 5GB virtual hard disk which is sufficient enough for building a failover cluster for learning.  Click Next to move to the Description screen where you can provide a detailed description for the Virtual Hard Disk, and then click Next. 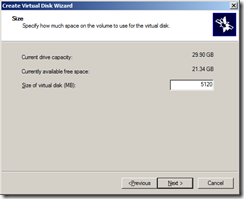 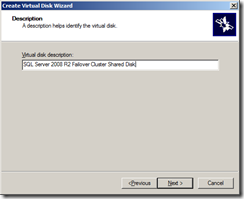 On the Access screen click the Add button to open the Add Target dialog, and assign the Virtual Hard Disk to the SQL2K8R2CLSTR iSCSI Target that we previously created, and then click OK. 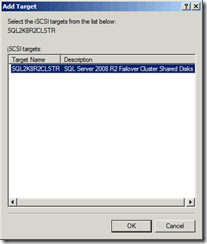 Once the iSCSI Initiator Properties dialog opens, type the network address to the iSCSI Network 1 connection for the iSCSI Virtual SAN, 192.168.31.1,  in the Target box, and then click Quick Connect.  The Quick Connect dialog will open up and you can click Done to connect to the iSCSI Target. 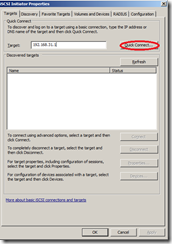 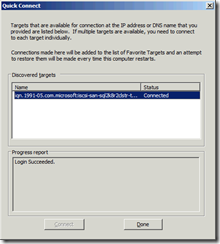 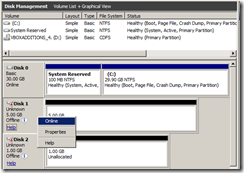 Then right-click on one of the disks and click on the Initialize Disk menu option to initialize the disks. 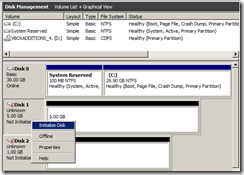 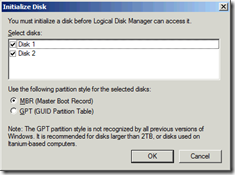 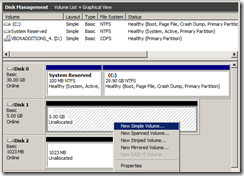 At this point the VMs are ready to begin the failover clustering build out in Windows which will be covered in the next post in this series.