Missing The Details Can Cause Such A Mess

This blog post is brought to you complements of tonight’s dinner meal.  My entire life I have been eating Greek food, mainly because I come from a Greek background on my fathers side, but also because its really good food.  I can’t tell you how many times in my life I have seen someone in my family, usually my mom or my Aunt Anna, prepare and cook spanakopita.  In the past year I’ve helped my mom make it twice in attempts to learn everything she did, but tonight was the first time I actually attempted to prepare the dish from scratch myself.  If you have never had spanakopita, it is basically a spinach pie that is made using phyllo (filo) dough, a paper thin pastry dough that can be incredibly difficult to work with if you don’t know what you are doing.

Today I decided to take my first shot at making spanakopita and while taste wise it wasn’t the best I’d ever had, it was far from being the worst.  I’d almost call the attempt a success, except for the important detail I learned as soon as I pulled the pan out of the oven and tried to cut into it.  If you recall, the dish is made with a paper thin dough for the crust, and my entire life I can remember my mom cutting the portions in the pan before baking the dish, but I only tonight learned that this is an important step.  If you don’t cut the portions before you bake the dish, you won’t get a clean cut through the upper portion of the crust because it becomes crispy and the paper think layers shatter when you attempt to slice through them.  It doesn’t ruin the dish taste wise, but presentation is out the window as shown in the below picture of the tonight’s left overs. 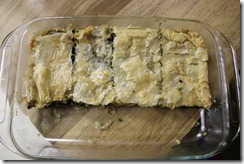 You’ve probably noticed that this is not a technical post at all; or is it?  As a trainer, mentor, and student this is a really good example of how the simplest detail can have a significant impact to the final outcome.  The same task may get accomplished, but it may not have the same fit and finish that it would had the detail been emphasized.  In the Army, we have a training doctrine that provides a POI (Program Of Instruction) that is incredibly detailed.  As a TAITC (Total Army Instructor Training Course) certified instructor, I can tell when an instructor at a course I am attending is following the POI for the course verbatim, not due to it sounding robot like and incredibly rehearsed, but because there are NOTES sections in the training that hit very important details that people often miss if they aren’t following the POI.   Keep in mind that these are the training packages that are used Army wide for the specific phase and level of training being conducted, and they have been reviewed numerous times at multiple levels inside of the Army, and they are under constant revision based on experiences from the instructors in the field.

Consider all the things that you do day to day without really considering the impact of the specific steps that you are taking.  Do you think that you can teach someone how to do those tasks and ensure that you don’t miss some simple step that is important to the final outcome?  My favorite example of this is unfortunately another military example, but it occurred when I first reported to my current unit as a Drill Sergeant Candidate, and I learned about this horrific little black book known as the Drill Sergeant Module Book.  This book is a verbatim reference of how each of the Drill and Ceremony Modules is supposed to be taught to a new recruit to ensure that they get the exact same detail of instruction as any other soldier entering the Army.  The first module made me laugh initially, the Position of Attention, I mean how difficult can it really be to teach someone to stand straight, not move, face forward and not talk while standing in a formation, until I tried it and failed miserably, and then tried again three more times; each time missing other details that are important to the final position.  The module for the position covers every detail head to toe:

8. Bring the heels together sharply on line, with the toes pointing out equally, forming an angle of 45-degrees. Rest the weight of the body evenly on the heels and balls of both feet. Keep the legs straight without locking the knees. Hold the body erect with the hips level, chest lifted and arched, and the shoulders square.

9. Keep the head erect and face straight to the front with the chin drawn in so that the alignment of the head and neck is vertical.

11. Remain silent and do not move unless otherwise directed. RELAX.

If you know the module segment that is listed above, you will never miss a single detail required to teach the position of attention to someone.  I had to use the first sentence from the Introduction of the module to actually find the above link to the module book; the memorization of modules is no longer a requirement in the current Drill Sergeant School POI.

I’ve tried and failed a number of times when working on training materials, presentations, or just generally trying to mentor someone, to make the instruction follow a similar pattern to make certain that I always hit the detail points.  However, unless you are willing to constrain yourself to sounding like a robot or sounding like you memorized your presentation entirely, you aren’t going to fit this type of pattern.  Today, Army Drill Sergeants don’t generally memorize the modules for Drill and Ceremony instruction.  In fact it has never been a requirement that a Drill Sergeant had to memorize the entire module verbatim, you just had to hit the key points and details inside the content, and you always have a demonstrator working with you, so if you miss something and they know it, they can exaggerate an incorrect motion that makes the position look wrong so that you see the mistake.

In technology, we have demonstrations as a part of most of our presentations, and I try to make use of notes in the demo code that I write to provide details that will trigger coverage of a specific topic if I’ve failed to cover it already.  I’ve seen some of my mom’s recipe cards from when I was a kid, and there are notes on those as well that provide a tip or trick that worked best for the specific recipe.  The problem with this is, in our day to day work, it is really easy to miss making these little notes known to others because they have become so ingrained in our way of doing things.

This post went from dinner to the Army and finally back into technology.  I hope the non-technical nature of the content still makes you think about how you perform some of your technical work as well.

One thought on “Missing The Details Can Cause Such A Mess”