I was recently working with a client that uses R720 servers for SQL Server and during restarts of the server, the POST (Power On Self Test) would stall for as long as 15 minutes before the Windows Server OS would actually begin starting.  I did some searching and found the Dell PowerEdge 12G Server Bios PDF which covers PCIe Slot Disablement, which allows the PCIe slots to be set to Boot Driver Disabled to prevent the Option ROM from running during the POST to allow for quicker boot times.  What this does is disable the preboot services for the device when it is a non-bootable device, while allowing the device to remain available to the OS.  On the systems where the boot times were taking over 15 minutes, none of the PCIe devices were used for booting the server, and were PCIe SSDs and NIC’s.  Setting the slots to Boot Driver Disabled reduced the POST time and allowed the server to reboot significantly faster.

To change these settings, first press F2 to enter into the BIOS during POST.  You will have to wait for all of the preboot before the System Setup screen will show up.  Then click on the Integrated Devices menu item: 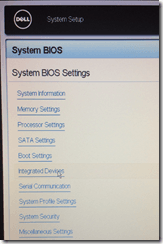 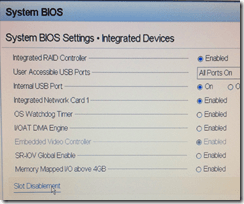 Then set the slots that are not required for bootable devices to Boot Driver Disabled:

Save the configuration and reboot the server and the POST should complete significantly faster now that it doesn’t have to initialize the device preboot and load the Option ROM from the device to allow it to be used for a bootable device.  Since the OS driver is still available once the OS boots, the device will function inside of Windows, but as with anything your mileage may vary and you need to test this change before introducing it on production systems.

Posted in: Hardware
Be the first to Reply!