OK, I know… this post is going to remind many of you of Baz Luhrmann’s Everybody’s Free to Wear Sunscreen. And, for me, ’99 was already probably too late (having been a beach lifeguard in the ’80s). But, I’d like to add a vote to that being very good advice.

This post is not going to be a technical one. It’s more of an experience one. And, one that I think everyone can benefit from. It’s true with everything in life – the sooner you find a problem, the easier it is to solve.

Back in 2010, I had a spot on my cheek that didn’t feel like much more than a little sliver of skin sticking up. It seemed to go away but then come back again. I saw a dermatologist who said that this is very common and is called Actinic Keratosis. It’s sometimes referred to as “pre-cancer” but the likelihood of it becoming cancerous is about 1 in 100 (this is just want I remember) and that we have an easy solution to freeze it off using cryotherapy. So, it was frozen off and gone. Well, for a few months. Then, it came back. And, then I had it frozen off again.

But, as life would have it, time went by. And, the spot got a bit bigger. But, somehow in my mind – the thought of it becoming cancerous was so low. I just became complacent. Last year, Paul started harassing me that I should go back and get it looked at. I argued that it was no big deal. It’s nothing. And, it wasn’t really doing anything interesting. Until this year. This year it actually scabbed and bled a couple of times. And, it seemed to be getting a tad larger. And, so I started doing some research, I read that there were a few signs that warranted having a skin lesion looked at:

Now, I don’t know where things went wrong but this is how I remember that appointment (this is the short version):

Me: Actually, it looks about the best its looked in 6 months. The combination of salt water and sun seems to have done it some good.

Derm: Started to look at my cheek and ended up looking at the wrong spot… that’s how uninteresting it was…

Me: Well, I started to get nervous a few weeks back when I read the ABCs of skin cancer: http://cancer.about.com/od/skincancermelanoma/p/abcdeskincancer.htm

Derm: Oh, no. That only applies to BROWN spots.

OK, so this was a new dermatologist. And, we didn’t really know each other. And, she seemed pretty convincing that I was there for no reason. She proceeded to tell me that while the Actinic Keratosis that I was diagnosed with was sometimes called “pre-cancer” that the likelihood of it being cancer was really low (yes, I’d heard that before) AND that it usually takes decades for it to become cancerous.

So, while I wasn’t so impressed with the bedside manners of this dermatologist, they were [at least] making me feel like there was nothing to be worried about. In the back of my mind, I started thinking – maybe I don’t even need to get this biopsied. Maybe I should just get it frozen off again.

But, a bit more time with this dermatologist made me just want to “get it over with.” To be honest, I should have asked a lot more questions. However, I was already feeling like I was wasting their time. So, I just decided to move forward. We did the biopsy. I remember asking what would need to be done if it was something and their response was “not much more than what we’re doing today.” (but, again, it felt more like a brush-off than a real answer)

I left. I went home. I got more and more frustrated for the next few hours as I realized what an incredibly frustrating visit I had had. The doctor didn’t really interact. They didn’t seem to want to answer questions. I thought – at least I can research things and investigate this. I have people to chat with about this, etc. What would the experience be (with that doctor) for someone else who doesn’t use the internet, etc. I ended up writing a 2 page letter to the head of dermatology. Here’s a VERY small highlight:

Today, I had my first and last appointment with Dr. XYZ of Dermatology.

… They need to understand that just because my problem isn’t interesting to them, it’s still something that I want taken seriously. …

The good news is that they took away most of my fears of something nasty; I’m looking forward to hearing my incredibly lame results.

So, I waited. It was a Tuesday when I had the appointment. It was Tuesday night when I wrote the letter. Then, on Wednesday, I was even more frustrated with the biopsy. I was told not to remove the band-aid for 24 hours but when I did, I had a grand-canyon-like crevice on my face. [Note about my overreaction: it was about the size of a dime. But, it was on my face and it was awful looking. All I could think about was – sh*t, that’s gonna leave a mark. And, sh*t why didn’t they tell me that this biopsy was going to be so much bigger than the original spot and much deeper than I expected. Ugh. Again, I wish I had asked more questions.]

And, now I was even more frustrated. It looked like I was going to have a scar – for nothing. I ended up calling my regular doctor who put all of this to rest. Yes, shave biopsies tend to look really gnarly at first but they tend to heal pretty well. And, even a couple of days later, it was looking much better. OK, no biggie.

But, then I got the results (Friday afternoon at 4:30pm btw – have a nice weekend). It was Squamous Cell Carcinoma. Yes, it is cancer. On. my. face. And, Dr personality referred me to a specialist and my interactions with them were done.

So, that was it. I had a consult setup for the following week and I was going to have the procedure done at that time as well. It’s called Mohs Surgery.

OK, there goes my weekend; that was not what I expected.

The good thing though is that Mohs Surgery didn’t sound too bad and I thought that it was probably the right direction. But, then I started to read about topical solutions (specifically Imiquimod). And, I started to wonder if Mohs was the best next step. And, then I decided I wanted a second opinion. So, I chatted with a few folks and got a referral for another dermatologist. She was out for a couple of days but her nurse talked to the head of their dermatology department and agreed that I should chat with someone else before I have the surgery. So, we cancelled that and I went in for my second opinion.

And, the long story short is that she was wonderful. She felt that Imiquimod wasn’t really the best for what I had. Instead, we should go with Fluorouracil. The Mohs Surgery has a 99% success rate but also was likely to leave a very large scar. My SCC wasn’t very deep but it extended beyond the area of the biopsy. So, we weren’t really sure how large the area actually was. The topical cream has an 85-90% success rate and would be a bit of a pain in the *ss for a few weeks (about 2 months) but would be a lot less likely to scar. And, of course, I can always go back and have the surgery.

So, we decided to go that route. And, that’s really the point of this post. I’m about to start teaching again next week, a couple of conferences are coming up, and my face isn’t all that attractive. In fact, tomorrow’s my birthday and Paul’s decided that the best present for me is a paper bag with two holes that just reads “wife” (yep, isn’t he nice :) ). And, it was going to be obvious that something is up.

But, even more than the lovely visual that is my cheek; I’ve learned a lot from this experience. And, if anything, maybe this will help some of you!

So, I’ll leave you with a quick shot of what I looked like a few days ago. I’m not sure I’ll do the whole timeline thing as I really just don’t want to remember this nasty thing. But, it’s not contagious and I am fine. It just looks nasty! 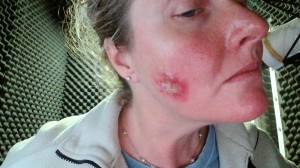 Thanks for reading,
Kimberly