Continuing on our path to understanding the basics and core concepts, there’s a big topic that’s often greatly misunderstood and that’s partitioning. I know I’m going to struggle keeping this one an introductory post but I’ve decided there are a few critical questions to ask and a few very important things to consider before choosing a partitioning strategy / design / architecture. I’ll start with those key points!

Partitioning is Not About Performance

I’m often asked – how can I use partitioning to improve this or that… and they’re often queries. I remember one where someone said they had a 3 billion row table and one of their queries was taking 15 minutes to run. Their question was – how can they best partition to improve query performance. I asked if I could look at the query and review their schema (secretly, that meant I wanted to see their indexes ;-)). And, sure enough, I asked if they were open to trying something. I gave them an index to create and asked them to run their query again. Without ANY changes to their table’s structure and only one added index, their query ran in 9 seconds. 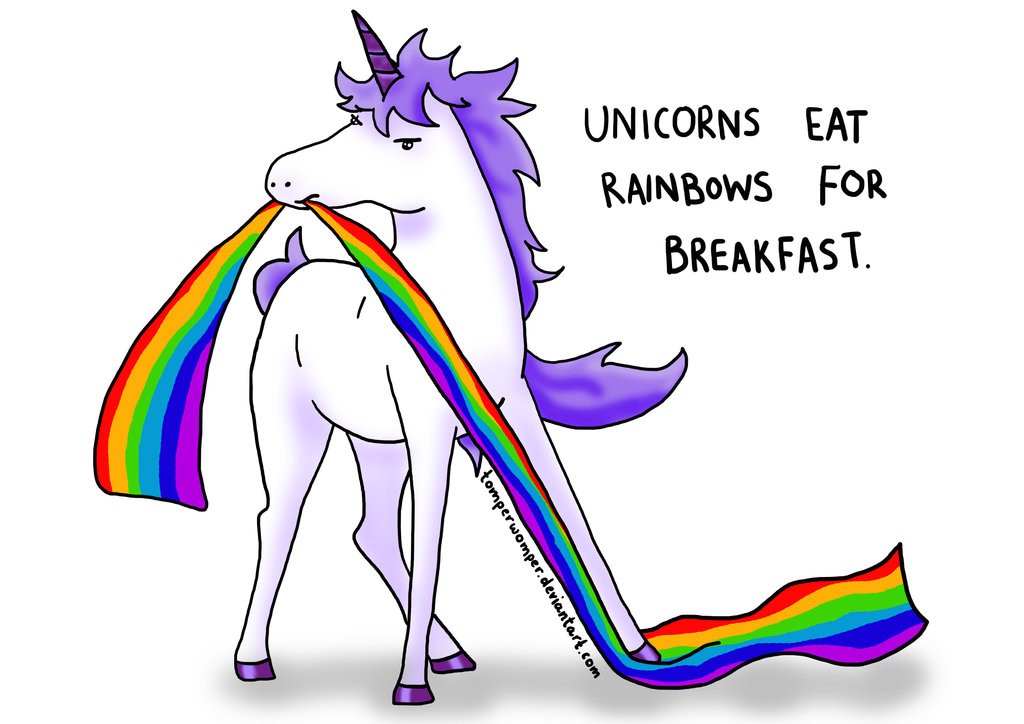 Partitioning, like indexing, isn’t all unicorns and rainbows… (check out more fantastic work from tomperwomper by clicking on the image)

Now, don’t forget – indexes aren’t all unicorns and rainbows… indexes have a downside:

So, you’d still need to determine if this is the right approach. But, the main point – partitioning really isn’t designed to give incredible gains to your queries. It’s meant to be better for data management and maintenance. However, some partitioning designs can lead to query performance benefits too.

The primary reason to consider some form of partitioning is to give you option in dealing with large tables; I tend to start thinking about partitioning as a table approaches 100GB AND it’s not going away (but, even if some of it will regularly “go away” then partitioning is definitely an option to help manage that regular archiving / deleting). I wrote a detailed post about this in response to an MSDN Webcast question I was asked about range-based deletes on a large table. It’s a very long post but it revolves around “how to make range-based deletes faster.” You can review that here. (NOTE: That post was written before we converted our blog to the new format and I’ve not yet gone through and manually converted all of my old posts… so, the formatting isn’t great. But, the content / concepts still apply!)

So the real reasons to consider partitioning are:

And that second point, is the most common reason to consider partitioning… but, it’s the first point that’s probably more noticable. :-)

What Feature(s) Should Be Used for Partitioning

As I’ve been discussing partitioning, I’ve been trying to generalize it as more of a concept rather than a feature (NOT tied directly to either SQL Server feature: partitioned tables [2005+] or partitioned views [7.0+]). Instead, I want you to think of it as a way of breaking down a table into smaller (more manageable) chunks. This is almost always a good thing. But, while it sounds great at first – the specific technologies have many considerations before choosing (especially depending on which version of SQL Server you’re working with).

These have been available in SQL Server since version 7.0. They were very limited in SQL Server 7.0 in that they were query-only. As of SQL Server 2000, they allow modifications (through the PV and to the base tables) but with a few restrictions. There have been some bug fixes and improvements since their introduction but their creation, and uses are largely the same. And, even with SQL Server 2016 (and all of the improvements for Partitioned Tables), there are still scenarios where PVs make sense – sometimes as the partitioning mechanism by itself and sometimes combined with partitioned tables.

Partitioned tables were introduced in SQL Server 2005 and have had numerous improvements from release to release. This list is by no means exhaustive but some of the biggest improvements have been:

However, even with these improvements, PTs still have limitations that smaller tables don’t have. And, often, the best way to deal with a very large table is to not have one. Don’t misunderstand, what I’m suggesting is to use PVs with multiple smaller tables (possibly even PTs) unioned together. The end result is one with few, if any, real restrictions (by physically breaking your table into smaller ones, you remove a lot of the limitations that exist with PTs). However, you don’t want all that many smaller tables either as the process for optimization is more complicated with larger numbers of tables. The key is to find a balance. Often, my general recommendation is to have a separate table per year of data (image “sales” data), and then for the older years – just leave those as a single, standalone table. For the current and future years, use PTs to separate the “hot” data from the more stable data. By using standalone tables for the critical data you can do full table-level rebuilds online (in EE) and you can update statistics more frequently (and they’re more accurate on smaller tables). Then, as these standalone months stabilize you can switch them into the year-based PTs to further simplify their management moving forward. 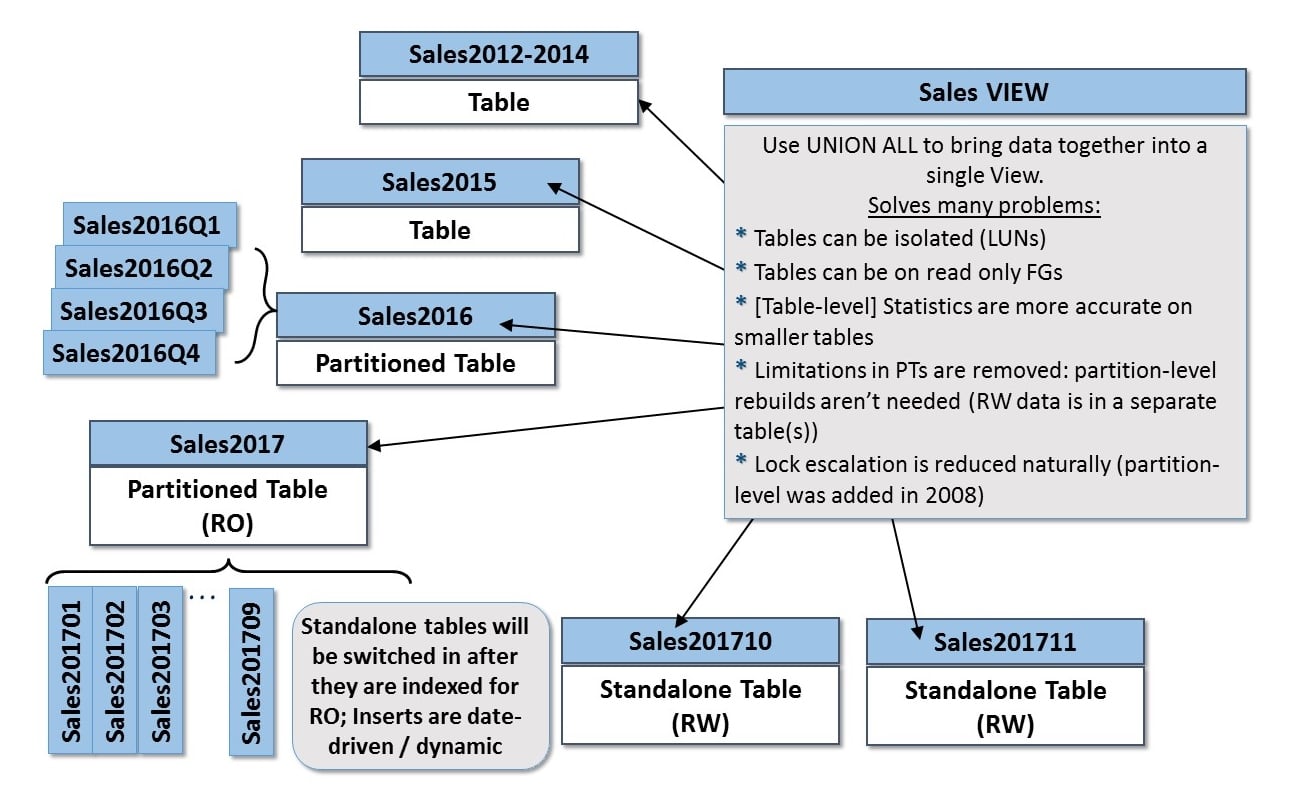 Partitioning a VLT into smaller tables (some of which are PTs) can be a HIGHLY effective strategy for optimizing all aspects of table management, availability, and performance. But, it’s definitely a more complex and difficult architecture to get right…

This architecture is complex but highly effective when designed properly. Doing some early prototyping with all of the features you plan to leverage is key to your success.

Partitioning is not really directly tied to performance but indirectly it can be extremely beneficial. So, for a SQL101 post, the most important point is that partitioned views still have benefits; they should not be discounted only because they’re an older feature. Both partitioning strategies provide different benefits; the RIGHT solution takes understanding ALL of their pros/cons. You need to evaluate both PVs and PTs against your availability, manageability, and performance requirements – and, in the most likely case, use them together for the most gains.

Since it’s concepts only, I still feel like it’s a SQL101 post. But, getting this right is a 300-400 level prototyping task after quite a bit of design.

Thanks for reading!
Kimberly

One Response to SQLskills SQL101: Partitioning