Well, it's been a crazy few weeks! Paul and I have been booked solid with client engagements, Immersion Events, conferences and other things (like chapter editing for the upcoming SQL Server Deep Dives Volume 2) and so I've been a bit behind with blogging. I have a ToDo list of items to blog about but I've got one that's fairly urgent. I'll mention a few issues here but above all – don't trust anyone. 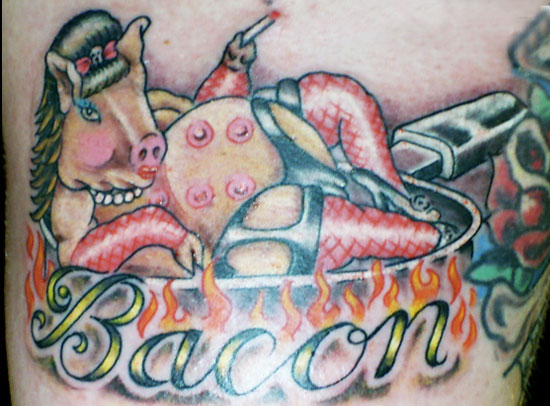 OK, I know that sounds a bit paranoid. Not meaning to be but this is a post that I'm adding to my "Just because" series as well as my "Are you kidding me?" series. That's how bad this is… almost as bad as these "stupid bacon related tatoos" – really, someone has this (forever!):

As a DBA (and/or SQL Architect/Database Designer/Developer) we're often tasked with making changes to databases and ideally, we want to use tools to make it easier. While I do agree that many tools help tremendously, I've been shocked lately by a few that have done the wrong thing. Paul blogged about a third party tool that didn't analyze indexes correctly here: Beware of advice from 3rd-party tools around dropping indexes (ultimately, the recommendations for what to drop – were wrong). And, recently, I've been shocked to learn that some of the schema change options in the database designer (in SSMS) are less than optimal when changing index definitions (especially those that handle changes to the clustering key).

And, if you're going to make schema changes in ANY tool – then work through what those changes are going to do. Most important – consider re-arranging the SQL (especially wrt indexes). If you're ever changing the CL index you need to do the following:

Some of the weird things that we've seen:

This is only a short list of some of the crazy things that we've seen. I'm working on a more comprehensive overview of all of these things but I wanted to get a few of them out there. BEWARE OF THE TOOLS and always use scripting and testing to make sure that things are doing what you think. If you're EVER going to make changes to a critical system – this is exactly what I'd do:

Picky yes… surprises NO. On a critical system you CANNOT afford surprises that create downtime – or worse, data loss.

Thanks for reading!!
kt

Posted in: Are you kidding me?, Clustered Index, Clustering Key, Indexes, Just because, Manageability, Nonclustered Indexes, Primary Keys
Be the first to Reply!