In 2009 I read a whopping 100 books (see my wrap-up post) and it seemed at times like I spent every waking moment reading, so I set myself a more modest goal of reading 40 books in 2010 – and I managed 45. A lot of people enjoyed my top-10 list last year so I thought I'd do it again this year and give you some books to think about reading in 2011. I read 'real' books – i.e. not in electronic form – I don't like reading off a screen. Yes, I've seen electronic readers – Kimberly has an iPad – and I'm not interested in ever getting one.

Choosing my favorite book this year is easy: Shantaram by Gregory David Roberts. This is a fabulous, fabulous, fabulous book. It's autobiographical and describes his life on the run from Australian prison in the slums of Bombay. Just go get it and read it – you won't be disappointed.

Now the details. I enjoy putting this together as it will also serve as a record for me many years from now. I hope you get inspired to try some of these books – push yourself with new authors and very often you'll be surprisingly pleased. 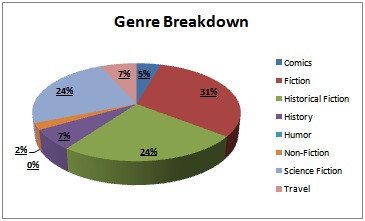 The average book length was 492 pages, a good 100 pages longer than last year – which also contributed to the overall total being lower. I picked my books differently this year too – reading a lot more science fiction and a lot less history. At least I think that's interesting :-)

It's a lot easier to pick a top-10 this year as I read so many less books. If you don't read much, at least consider looking at some of these in 2011. It's impossible to put them into a priority order so I've listed them in the order I read them, along with the short Facebook review I wrote at the time.

#4 Shantaram; Gregory David Roberts; 913pp; Fiction; March 27th (Incredibly good (and long) book based on the true story of the author from a prison break in Australia to the slums and mafia of Bombay to joining the mujahedeen in Afghanistan, and back again. Kind of book that you only find a few times in your life. Very strongly recommended. Makes me want to go back to India again.)

#8 Pushing Ice; Alastair Reynolds; 592pp; Science Fiction; May 30th (Reynolds is just fabulous – my new favorite sci-fi author. A departure from the Revelation Space universe, this deals with humans hitching a ride on the Saturnian moon Janus as it suddenly departs the solar system. Good characterizations and plenty of invented technology. I couldn't put it down during the last 100 pages. Can't wait to read another when we get home.)

#9 Gentlemen and Players; Joanne Harris; 432pp; Fiction; May 31st (First book I've read from Joanne Harris who penned Chocolat, which was a great movie. Good vacation read – reminded me of my days at old Glasgow Academy. Nicely spun story with an excellent twist at the end – recommended.)

#13 House of Suns; Alastair Reynolds; 576pp; Science Fiction; June 20th (Another fantastic space-opera from Reynolds. This time the story revolves around 1000 shatterlings – clones imbued with the same facets of the original's personality and sent off around the galaxy, meeting back together every 200 thousand years. After 6 million years of swashbuckling, the proverbial hits the fan in a big way. Excellent story!)

#14 The Glass Palace; Amitav Ghosh; 512pp; Fiction; June 25th (Fabulous! The 3rd of Ghosh's books I've read was almost as good as Sea of Poppies I read last year. This one deals with the overthrow of Burma by the British in 1885 and the two subsequent wars, following the life of a boy who becomes a teak baron and the Burmese royal family. Vivid portraiture and imagery – definitely a must read.)

#24 A Place of Greater Safety; Hilary Mantel; 768pp; Historical Fiction; September 8th (Fabulous fictional account of the three main protagonists of the French Revolution – Danton, Robespierre, and Desmoulins, following them from their humble beginnings through to their down falls and executions. Incredibly in-depth and hugely readable – a masterpiece!)

#30 Ex-Libris; Ross King; 400pp; Historical Fiction; October 11th (Excellent novel set in 1660 in London dealing with a book seller who gets involved in investigating the existence of a rare hermetic manuscript. Full of period detail and lots of info on rare books from that time, a book about old books and libraries is always one of my favorites. Some excellent twists and turns keep the book interesting. Recommended (plus his earlier non-fiction work I read last year: Brunelleschi's Dome))

#33 Hyperion; Dan Simmons; 512pp; Science Fiction; October 20th (I'd been putting this off as I thought it would be dated, but it was really excellent – so good in fact that I've bought the subsequent 3 in the series, plus a couple more of Simmons' sci-fi works. Hard to explain the plot, as with all richly-constructed sci-fi universes, but gritty, good tech, good character development. Hugely recommended.)

#45 Infoquake; David Louis Edelman; 421pp; Science Fiction; December 21st (Excellent start to a trilogy! Great combo of sci-fi and business set around 500 yrs in future. Deals with bio/logics – nano-machines in the body and their programming, plus the business side of the industry. A real page turner and looking forward to starting the next one. Great glossary and timeline appendices too. Strongly recommended!)