Are I/O latencies killing your performance?

(New for 2020: we’ve published a range of SQL Server interview candidate screening assessments with our partner Kandio, so you can avoid hiring an ‘expert’ who ends up causing problems. Check them out here.)

In this post I explain some methods for investigating and reducing high tempdb and transaction log I/O latencies that can severely hamper the performance of your workload.

Back at the end of August I kicked off a survey asking you to run some code to calculate average I/O latencies and send me the results. I have to apologize for taking two months to get to this editorial as I kept putting off spending the time to collate all the results I was sent. I made up for it by putting in lots of useful information :-)

I received results from 1094 random servers around the world (thank you all!) hosting 25445 databases and it took me a while to pull all the results into SQL Server so I could aggregate the data. Here it is.

What is Good or Bad?

For everything we’re talking about, you have to consider two things:

Everyone has their idea of what constitutes good or bad I/O latency, and here’s my take:

You may want to argue that my numbers are too high, too low, or wrong, based on what you’ve seen/experienced, and that’s fine, but this is my blog and these are my numbers :-) You may not be able to get to my Excellent or Very Good numbers unless you’re using the latest locally-attached flash storage and aren’t driving them hard with your workload. Remember these are just my guidelines, not any kind of rule that SQL Server requires.

On to the survey data…

For this data I worked out the average read and write latency over all tempdb data files for each instance. I didn’t see any instances where one tempdb data file had a huge latency compared to the others so I believe this is a valid approach. 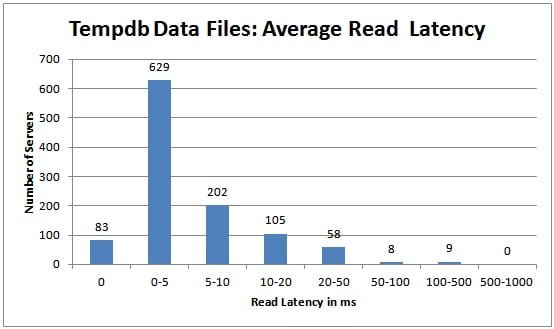 The tempdb data file read latencies aren’t too bad, to be honest, with more than 93% of all the servers in the survey having read latencies less than 20ms.

To be honest, I’m pretty shocked by these results. especially the relatively high number of servers with multi-second average write latencies for tempdb.

So if you check your average I/O latency for tempdb (using a script such as the one I blogged here, using sys.dm_io_virtual_file_stats) and find that it’s really high on my (or your) scale, what can you do?

Well, there are four approaches I can think of:

One other thing to consider is the risk of making a change to your code and/or the cost of the engineering effort (dev and test) to do so. It may be cheaper and less risky to move to a faster I/O subsystem. Your call. Another issue you may have is that the bad code is in a 3rd-party application that you have no control over. In that case you may have no choice except to throw hardware at the problem.

For this data I considered each database separately rather than aggregating per instance. 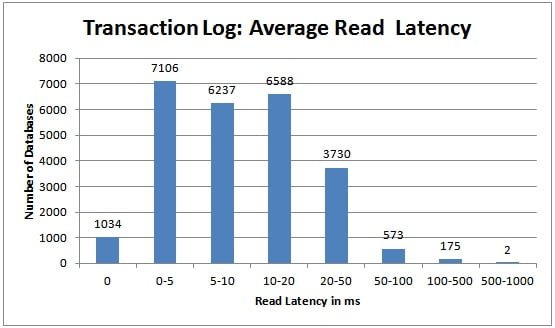 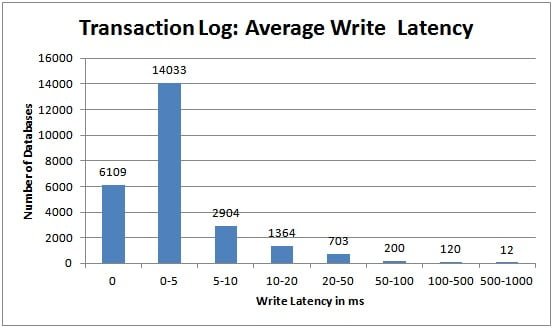 So you’re focusing on write latency. Again, there are multiple approaches that are the same as #1-#4 above. What you’re looking for in approach #3 is different though. I’ve written several detailed posts about transaction log performance tuning (including reducing the amount of log generated and changing the log block flush pattern) for SQL Sentry’s SQLPerformance.com blog so rather than duplicate those, I’ll point you to them:

And then there’s my 8-hour Pluralsight online training class that covers SQL Server: Understanding Logging, Recovery, and the Transaction Log.

It’s really important that you pay attention to the read and write I/O latencies for critical components of your SQL Server environment: tempdb and transaction logs. I’ve given you a lot of info above on what you can do inside and outside SQL Server to reduce these latencies and increase your workload throughput.

Unless you have no choice, don’t just throw some SSDs into the mix without first figuring out whether there are some things you can do inside SQL Server to reduce the I/O load, and if you do throw in some SSDs, make sure that you’re using them to host whatever files are your biggest I/O bottleneck, and make sure you’re using at least two of them in a RAID-1 configuration to protect against failure.

I hope this has been a useful read – happy tuning!

22 thoughts on “Are I/O latencies killing your performance?”