Are your CPUs running slowly? Tool tip and survey

(Yes, I know I haven’t editorialized the last survey on What’s in a Job Title – I will in the New Year.)

Over the last couple of weeks I’ve signed up a bunch of new customers for maintenance/ops audits and general perf work and I’ve had all of them check whether power saving mode is enabled for their CPUs. And I’ve been astounded by the results – as have some of the customers who thought they were running at full speed all the time.

In a nutshell, to save power the CPUs can essentially down-shift to a lower clock speed and then automatically speed up again when the load increases. But at what point do they speed up? That varies – you might have to really push things to make them speed up.

And do you really want your workload running slower until the CPU usage hits the magic speed-up threshold? Most likely the answer is no.

So the point of this blog post – I’d like you to go check the CPU speeds on your systems and see whether they’re in power-saving mode without you knowing. I think you’ll be surprised. And then I want you to tell me what you saw.

You can check the CPU speed using the free CPU-Z tool – it’s awesome. It’s just asks the CPU it’s speed – no load is put on the system.

The picture below shows a CPU-Z snapshot from a client system. The CPUs are spec’d at 2.4GHz but as you can see, they’re only running at 1.2GHz – half speed. 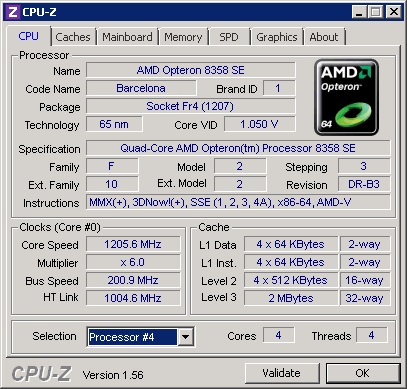 Go download the tool and run it on your system – what did you see?

I’ll report on the results in a few weeks. [Edit: The survey results can be found HERE.]

You can another read example of this problem in a blog post by Brent Ozar (“SQL Server on Power-Saving CPUs? Not So Fast.“) about helping Stack Overflow upgrade.

5 Responses to Are your CPUs running slowly? Tool tip and survey