In last week's survey I asked you what you think is the hardest thing when becoming an involuntary DBA – see here for the survey. Here are the results as of 6/15/09. 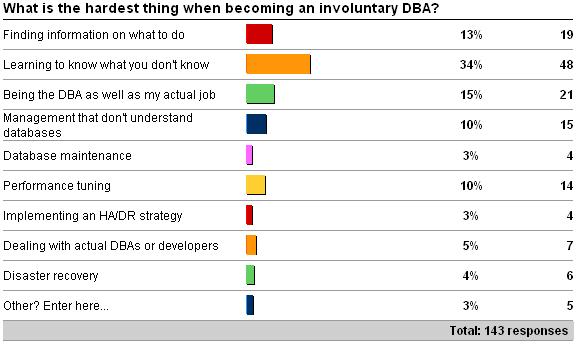 The 'other' responses were:

We all know the definition of 'involuntary DBA' – someone who is made to assume a DBA role or take on DBA responsibilities, usually against their will. I used to call them 'accidental DBAs' but too many people thought I meant DBAs who had accidents, so I changed my phrase. Let's go through some of the answers, ranked by number of responses.

Learning to know what you don't know. Actually the first step here is learning to know *that* you don't know – if you think you know everything (really in any field and with any expertise level) then you're most likely wrong, no matter who you are and what the field is. It can be a humbling experience making (and accepting) that realization and then quite daunting when you realize that there is maybe *so much* that you don't know and might have to learn. For an involuntary DBA this can be doubly daunting, because not only do you realize that there's a ton you don't know about being a DBA, but that means there's a ton you don't know about managing this (maybe mission-critical) SQL Server that you're suddenly responsible for and your job security is now suddenly dependent on doing the right thing.

Being the DBA as well as my actual job. Many times an involuntary DBA is actually a bolted-on side-role for someone with a real daytime job too – sometimes not even an especially technical daytime job. I'm teaching a class right now for a large customer of ours and about 1/3 of the 30+ people in the class are involuntary DBAs as well as operations engineers. Some other common examples – SharePoint admins who suddenly find themselves with an Enterprise-class SQL Server instance underpinning their SharePoint farm, developers using SQL Express as part of a client application who have to think about the maintenance implications of having SQL Server installed, the person who sits nearest the SQL Server instance when the real DBA leaves or is fired. Sometimes becoming an involuntary DBA can be very rewarding and take you down an unexpected but ultimately welcome career path, but many times its an unwelcome burden, and very occasionally it can be disastrous. A few weeks ago I heard on the forums from someone who had become an involuntary DBA after the actual DBA has been fired – and his job was on the line if he couldn't get the broken database fixed in 24 hours. Brutal. Being a DBA can be a full-time job in itself, and if you ask many production DBAs, they'll tell you that it can be way more than the standard 40-hour work week (seriously, does that even exist any more in our industry?) – so to try and do that *as well* as a regular 9-5 job might be nigh on impossible.

Finding information on what to do. This can be the real kicker – you've realized that there's lots you don't know – and you want to learn – but where to start? Who to ask? There's a great community of SQL Server folks that are very willing to help out – if you're reading this then you've already stumbled in to the community somehow. There are lots of blogs with information on – some of what I post is deeper information than you *really* need to know to get by, but the editorials in the Weekly Survey series are a good overview of some of the topics to be concerned about, and Kimberly also posts a ton of good info on her blog. In TechNet Magazine, I've been writing many articles aimed specifically at involuntary DBAs – here are some links:

Here's a quote from an interview I did with SQLRockstar recently (hope you don't mind Tom):

SR: What advice would you give to new SQL DBA’s just entering the field?

PR: There’s a huge amount you don’t know – that’s just a fact. SQL Server can appear very easy to setup and get running, but there are lots of ways to shoot yourself in the foot if you’re not careful. I’m not trying to be scary, just engender a healthy amount of trepidation. Get yourself a mentor if possible, get some training, practice, practice, practice, read a bunch of people’s blogs, follow folks on Twitter, and so on. You need to be an information sponge for a couple of years at least, and get as much experience as you can with the varied aspects of SQL Server – perf tuning, disaster recovery, security, design, etc. And the more you tinker, play, and learn – the more you’ll realize there’s lots you still don’t know. Accept that and be willing to take advice, make mistakes, and learn and you’ll go a long way. Don’t be intimidated to ask people questions, most of us are happy to help – we all started with zero SQL Server knowledge, no matter where we are now.

The last sentence is the most critical in that paragraph. No matter how knowledgeable anyone in the SQL community might seem, every single one of us started with *no* SQL Server knowledge at all. I had never even heard of SQL Server until I joined Microsoft in early 1999 – and there's a *huge* amount of SQL Server I know very little about – I can barely even spell BI for instance. But I know what I don't know and I know where to go to search for information, or who to ask.

And for all those of you in the SQL community, when you're answering what might, at first glance, look like a stupid question from someone with zero reputation or forum points, consider the fact that they may well be an involuntary DBA trying to find an answer because they know they need help and don't have anywhere better to go. Be kind. There's no such thing as a stupid question – the only stupid thing is *not* asking a question when you know you don't know the answer. A sure-fire way to put someone off asking any more questions is to slap them down when they ask their first.

Now, apart from asking the questions on forums etc, another problem that involuntary DBAs have is knowing what information/answers to trust. This one's very hard, as unless you get to know people in the community, you've got no clue who these people are and why you should believe them. The onus is also on us in the community to make damn sure that when we answer a question it's the *right* answer. This is especially true in the corruption forums where telling someone the wrong answer can deepen the corruption hole the poor DBA is already in.

Management that don't understand databases. And also don't understand that the new involuntary DBA isn't going to immediately and magically become 'super-DBA' overnight and fix all the problems with the SQL Server instance. It takes quite a while to learn the ins-and-outs of being a good DBA, and having the confidence to be able to argue with management about what is and isn't possible. There's no easy solution to this one I'm afraid – education is the only option.

Dealing with actual DBAs and developers. There's a tendency in human nature to be scornful and dismissive of people in the same field who are not as knowledgeable or talented – this can be especially true in the technical area we inhabit where sometimes the people we work with may be egotistical and possibly even lacking in social skills – the 'typical' geek developer. Apologies to all those out there who *are* nice and *do* have great social skills – but after 9 years as a developer and manager of various technical disciplines at Microsoft, I know of what I speak. As an involuntary DBA you may come up against some of this antipathy. My advice – you're just going to have to deal with it until you become more knowledgeable. It's unfortunate, but it's human nature. One way to gain respect and trust from these people is to learn some stuff and solve some problems – don't ever BS about something you don't know about – guaranteed way to quickly lose whatever respect you've built up. You might try complaining to your management, but if it's the same management that added being an involuntary DBA to your regular job, from what I've heard, they're unlikely to listen to you. I don't mean to sound depressing, I'm just being honest.

Performance tuning, disaster recovery, database maintenance, implementing an HA/DR strategy. It's hard to pick which of these is the most important for a new involuntary DBA to focus on – but I think I'd go for database maintenance. That addresses some perf issues (index fragmentation management, statistics maintenance) and some disaster recovery issues (taking backups, running consistency checks). Checkout the TechNet Magazine article above for (what I think is) a great primer, and for perf tuning, see the editorial from a couple of weeks ago that has lots of links: Important considerations when performance tuning.

So if you're an involuntary DBA, the bottom line is that it's going to be a struggle for you – but there are lots of resources out there and people willing to help out.

Don't be afraid to ask.

PS By all means add comments with more involuntary DBA resources and I'll collect them together.

4 thoughts on “Becoming an involuntary DBA – you’re not alone”