Well it's been almost 6 weeks since my last benchmarking blog post as I got side-tracked with the Myth-a-Day series and doing real work for clients :-)

In the benchmarking series I've been doing, I've been tuning the hardware we have here at home so I can start running some backup and other tests. In the last post I'd finally figured out how to tune my networking gear so the performance to my iSCSI arrays didn't suck – see Benchmarking: 1-TB table population (part 5: network optimization again).

Now I've decided that instead of using a 1-TB data set, I'm going to use a 100-GB data set so I don't have to wait 6 hours for each test to finish, it also means that I can start to make use of the SSDs that the nice folks at Fusion-io sent me to test out (sorry guys – I did say it would be a while until I got around to it!). See New hardware to play with: Fusion-io SSDs. I've got two 640-GB cards but I can only install one right now as I need the other PCI-E slot for the NIC card so I can continue to make comparisons with the iSCSI gear without compromising network performance. Then I'll move on to some pure iSCSI vs pure SSD tests.

I've been starting to discuss SSDs a lot more in the classes that I teach and there's some debate over where to put an SSD if you can afford one. I've heard many people say that using them for transaction logs and/or tempdb is the best use of them. We all know what the real answer is though, don't we – that's right – IT DEPENDS!

When to consider SSDs?

An SSD effectively removes the variability in latency/seek-time that you experience with traditional disks, and does best for random read/write workloads compared to sequential ones (I'm not going to regurgitate all the specs on the various drives – Google is your friend). Now, for *any* overwhelmed I/O subsystem, putting an SSD in there that removes some of the wait time for each IO is probably going to speed things up and lead to a workload performance boost – but is that the *best* use of an SSD? Or, in fact, is that an appropriate use of hardware budget?

If you have an overwhelmed I/O subsystem, I'd say there are two cases you fall into:

I'd say that case #2 is when you want to start looking at upgrading the I/O subsystem, whether with SSDs or not.

If you're in case #1, there are three sub-cases:

If you're in #1.1, go tune the queries first before dropping a bunch of money on hardware. Hardware will only get you so far – sooner or later your workload will scale past the capabilities of the hardware and you'll be in the same situation.

If you're in #1.2, consider giving SQL Server more memory to use for its buffer pool so it can hold more of your workload in memory and cut down on I/Os that way. This is going to be cheaper than buying SSDs.

Now you might want to start considering SSDs, as well as more traditional I/O subsystems. But what to put on it? Again, any overwhelmed I/O subsystem will benefit from an SSD, but only if you put it in the right place.

I have some clients who are using SSDs because they can't connect any more storage to their systems and this gives them a lot of flexibility without the complexity of higher-end storage systems. Others are thinking of SSDs as a greener alternative to traditional spinning disks.

The other thing to consider is redundancy. A 640-GB SSD card presents itself as 2 x 320-GB drives when installed in the OS. As you know, I'm big into availability so to start with I'm going to use these as a 320-GB RAID-1 array (not truly redundant as they're both in the same PCI-E slot – but I can't use both PCI-E slots for SSDs yet). I need to make sure that if a drive fails, I don't lose the ability to keep my workload going. This is what many people forget – just because you have an SSD, doesn't mean you should compromise redundancy. Now don't get me wrong, I'm not saying anything here that implies SSDs are any more likely to fail than any other technology – but it's a drive, and prudence dictates that I get some redundancy in there.

But which of your data and log files to put onto an SSD? It depends on your workload and which portion of your I/O subsystem is overloaded. This is what I'm going to investigate in the next few posts.

For my first set of tests I wanted to see what effect and SSD would have on my workload if the transaction log isn't the bottleneck but I put in on an SSD, as much advice seems to suggest. In other words, is the log *always* the best thing to put on an SSD? I'll do data files in the next test.

This is a narrow test scenario – inserting 100-GB of server-generated data into a single clustered index. The post Benchmarking: 1-TB table population (part 1: the baseline) explains the scripts I'm using. The hardware setup I'm using is explained in Benchmarking hardware setup, with the addition of the PCI-E mounted 640-GB ioDrive Duo.

In each case I ran five tests and then took the average to use as the result.

This test case simulates a system where the log starts small and grows to around 6GB, then remains in steady state. Transaction size is optimized for the maximum 60-KB log block size, when the log *must* be flushed to disk, no matter whether a transaction just committed or not.

The results from the first test are below:

At the 50MB growth rate, the SSDs gave me a 5% gain in overall run time (the green line), but this decreased to around 2% when I started to increase the auto-growth size. Remember each data point represents the average of 5 tests.

This test is the same as the previous one, but tries to remove the overhead of transaction log growth by increasing the initial size of the log so it reaches steady-state faster.

The result from the second test are below: 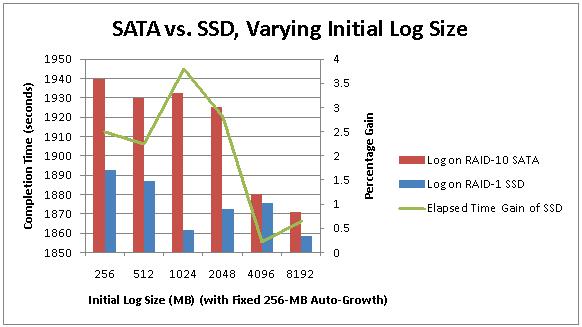 For initial log sizes up to and including 2-GB, the SSD gives me a 2.5-3.5% gain over the SATA array. This makes sense as the zero initialization that is required by the log whenever it grows will be a little faster on the SSD. Once I hit 4-GB for the initial size they performed almost the same, and at 8-GB, when no autogrowth occured, the SSD was only 0.8% faster than the RAID-10 array.

What am I trying to show with these tests? For this post I'm not trying to show you wonderful numbers that'll make you want to go out and buy an SSD right away. I wanted to show you first of all that just because I have an SSD in my system, if I put it in the wrong place, I don't get any appreciable performance gain. Clearly the RAID-10 array where my log is was doing just fine when I set the correct log size and growth. You have to think about your I/O workload before making knee-jerk changes to your I/O subsystem.

But one thing I haven't made clear – a single SSD configured in RAID-1 outperformed a RAID-10 array of 8 7.2k SATA drives in every test I did!