Better together – the importance of great inter-team relationships

Back at the end of January I kicked off a survey about the relationship between your DBA and dev teams. See here for the survey. 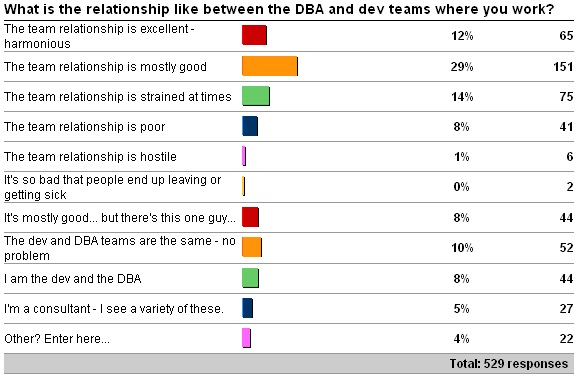 The 22 Other values are:

A very interesting variety of situations and views. Good to see that the majority of people are experiencing good relations between teams (answers 1 + 2 + 7 + 8 = 59%).

Here's a comment from the original post that sums up what I see a lot of the time when first working with clients:

Strong words, which demonstrate a fundamental lack of understanding about what the various teams do. That is very often the root cause of all the animosity between teams – not understanding the goals and motivations of the other team. For instance, a dev team is often under a lot of pressure to get the next release finished and put into production. A DBA team needs to preserve the availability and performance characteristics of the production system. These two goals are often at odds as the dev team wants to throw code over the wall and get it deployed, whereas the DBA team wants the code to be tested to ensure it will not compromise the production system in any way.

There's also the case of those who answered #6 – one guy who's the problem between the teams. This could be someone in an architect or lead developer role, who has a lot of experience, but maybe some misconceptions, who has a domineering personality and is always right – no matter who is trying to show them that they are in fact incorrect. We've never come across this person during our consulting work, oh no. :-)

How do you work towards solving these problems?

Last year in London we did a 1-day workshop where the focus was bridging the gap between development and production. We highlighted a bunch of problems we've seen over the years and how some education could have helped. Here are some of the takeaways people had from the day:

And the one we stressed the most was:

This is the most powerful way to foster relationships between teams in my experience – offering to educate the other team on, say, one issue a week. This will show them that you're willing to put skin in the game (and hopefully they'll reciprocate) and in the long-term it will save you time. And it's a great way to show initiative and that you're a team player  and motivator to your management. Some ideas for you on this:

To summarize, a bad working environment is toxic. You can fix it. It'll take some effort on your part but the pay-off is really worthwhile. And there are lots of resources out there to help you out.

What are you waiting for?