Death of the MCM program

Last week, in the immediate aftermath of the sudden announcement by Microsoft of the cancelling of the MCM/MCSM (Microsoft Certified Master) program, I kicked off a survey asking how the decision affects you. I hoped it would be one more data point that would help persuade Microsoft Learning (MSL) that the MCM program should continue. Alas, it is not to be, as on Monday’s con-call between the MCM community and MSL it was made very clear that the program is effectively dead.

Although the MCM webpage still says that October 1st is the deadline for taking the exams, for those of you now hurrying to complete the certification, MSL have extended the deadline to December 31st. See Ryan Rinehart’s comment for confirmation of this.

Here are the results of the survey. 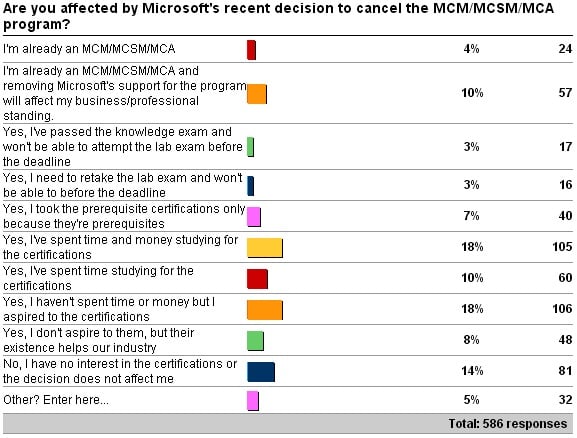 The “Other” responses are:

And there you have it. I feel particularly bad for those people who have spent time and money taking prerequisite exams, or have passed the knowledge exam but not the lab exam.

I’m not going to waste your time by reiterating the same arguments about certifications and the MCM program that you’ve probably read several times now over the last two weeks. But I do urge you to read the eloquent post by Joe Sack (who used to run the SQL MCM program) on the subject and the really disappointing con-call with MSL: We can handle the truth.

I wholeheartedly agree with everything Joe says, including the part about being very wary of advocating any future advanced certification that Microsoft comes up with, if they even do – which many of us doubt.

Although the MCM has been removed as the focus point for learning goals, learning still goes on, and people will still aspire to make themselves better SQL Server professionals.

Don’t give up learning – it’s always worth it.

9 Responses to Death of the MCM program