Problems from having lots of server memory

A month ago I kicked off a survey asking how much memory is installed on your largest server that’s running SQL Server. Thank you to everyone that responded. 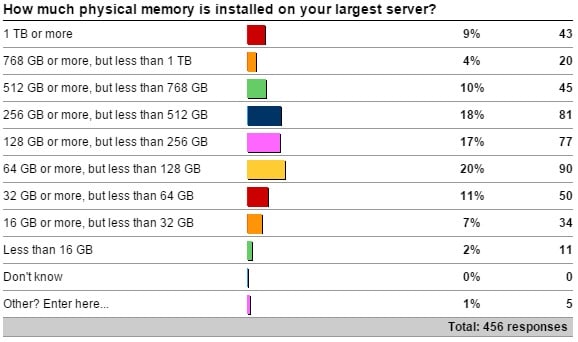 The “other” values are:

This is very interesting:

So what do these results mean? Well, the number of servers out there with lots (more than 128GB) of memory is more than half of all respondents. The more memory you have, the more important it is that you make sure that the memory is being used efficiently and that you’re not wasting space in the buffer pool (see here) and that you’re not churning the buffer pool with poor query plans causing lots of reads (see here).

What other things could be problems with large amounts of memory?

Adding more memory is one of the easiest ways to alleviate some performance issues (as a band-aid, or seemingly risk-free temporary fix), but don’t think it’s a simple thing to just max out the server memory and then forget about it. As you can see, more memory leads to more potential problems, and these are just a few things that spring to mind as I’m sitting in the back of class here in Sydney.

Be careful out there!

12 Responses to Problems from having lots of server memory