Last week the SQL Server Tools team released a new version of Management Studio, 18.4, and it dropped in the middle of my Query Store full day pre-con on Monday. Those two are related. There were some changes in SSMS 18.4 specific to Query Store, and for a few seconds over lunch I thought about downloading the new version and running it for my afternoon demos. But…I didn’t want to anger the demo Gods, so I stuck with 18.3.

The list of features and fixes for each release of SSMS can be found here, and for this post I’m interested in the features related to Query Store. Within Management Studio we’ll create a new database named QS_Settings and turn on Query Store with the default options:

If we look at the Query Store page on the Database Properties window, you’ll see some additional entries: 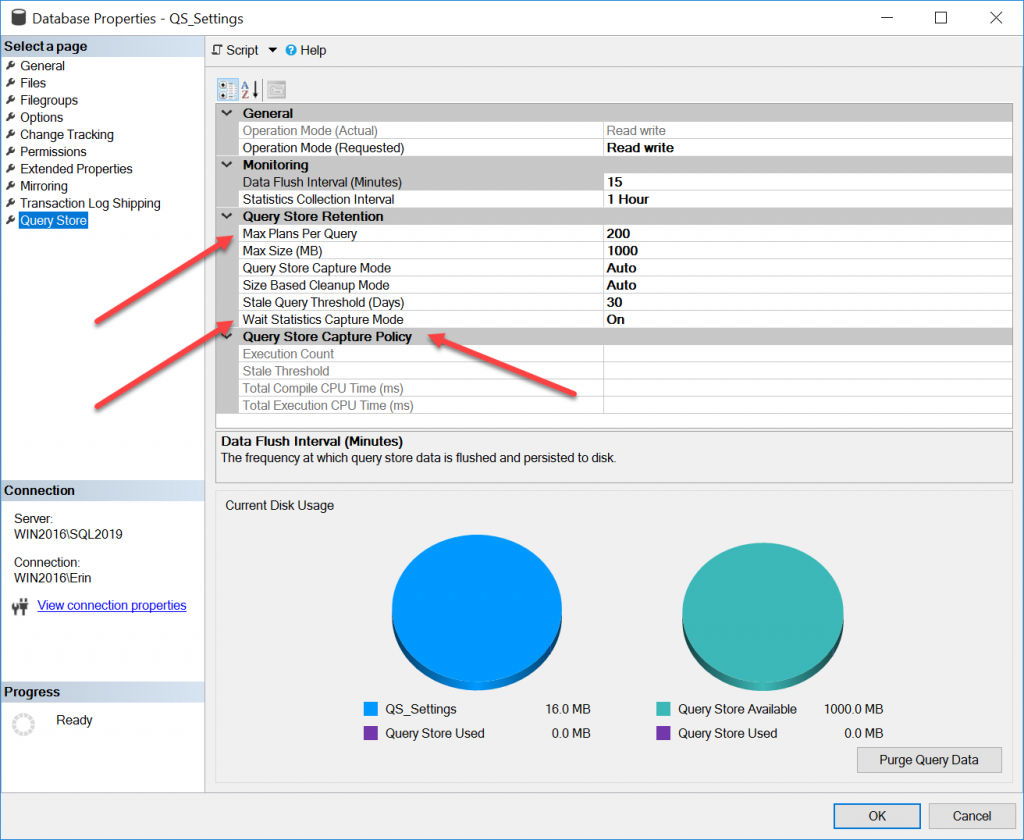 For comparison, here is a screen shot of the same window in SSMS 18.3: 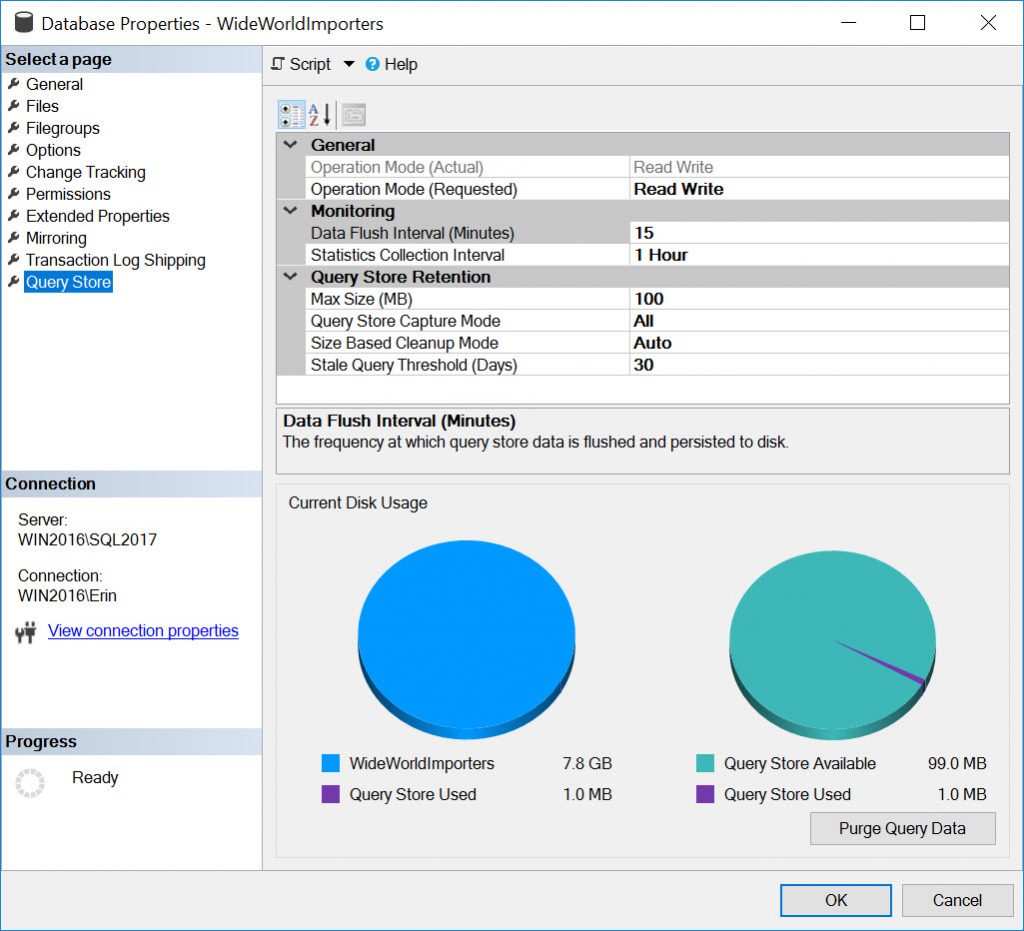 Query Store options in SSMS 18.3 and below

There are two options that, previously, you could only modify using T-SQL:

When you enable Query Store in any version of SQL Server, by default the value for MAX_PLANS_PER_QUERY is 200. As mentioned in my Query Store Settings post, I recommend leaving this setting at the default value. The only case where I would change it is if I find that I have queries with more than 200 plans. If you are running SSMS 18.3 or below, or Azure Data Studio (ADS), you can use:

With SSMS 18.4, you now have the ability to change both options via the UI. In general, I recommend using the T-SQL because then it can go into change control, and you don’t have to worry about altering another setting by mistake.

In SQL Server 2019 we now have the ability to customize queries that are captured based on execution count, total compile CPU time (ms), OR total execution CPU time (ms), within a defined window of time. This provides much more control than the AUTO option, which excludes queries based on internally-determined thresholds set by Microsoft, which are not documented. The CUSTOM option is a game-changer, as it allows those with ad hoc workloads to use Query Store and minimize the performance overhead.

When upgrading a database from SQL Server 2016 or 2017 to SQL Server 2019, with Query Store already enabled, the value for QUERY_CAPTURE_MODE will not change. To enable and customize the options if you are running SSMS 18.3 or lower, or ADS, you can use:

Within SSMS 18.4, when you change QUERY_CAPTURE_MODE to CUSTOM in the UI you will see: 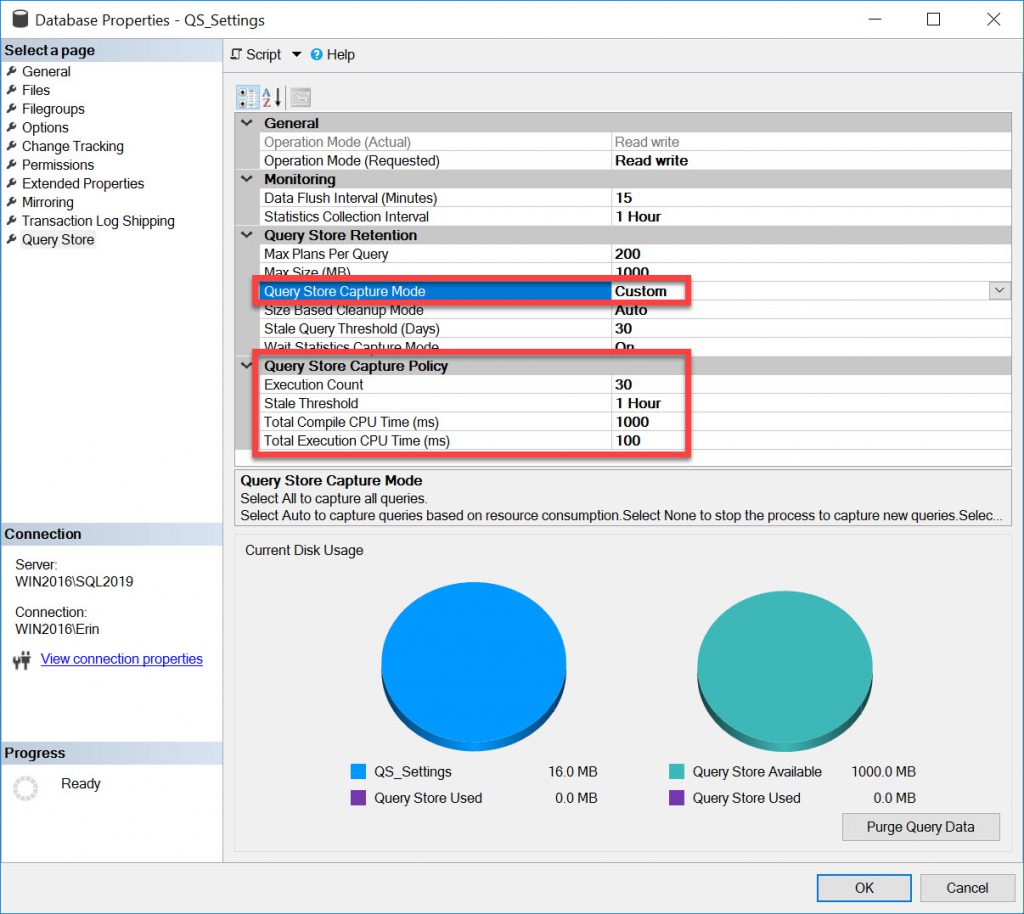 At this time, I do not have recommendations, based on data, for these options. I have one customer running SQL Server 2019, and I haven’t heard from many people who are running SQL Server 2019 and have Query Store enabled.  Yet. Over time, I am hoping to get better information, but my initial suggestion is that you make a best estimate and then monitor. The default values are a good starting point. The minimum window of time (STALE_CAPTURE_POLICY_THRESHOLD) is one hour, and the default 1 day. Note that the drop-down for this option contains a list of values:

Unlike INTERVAL_LENGTH_MINUTES, these are not the only values that you can use. For example, you can set STALE_CAPTURE_POLICY_THRESHOLD to a value not in the list, such as two hours, using T-SQL:

The value of 2 HOURS will then appear in the drop-down list going forward, which I find interesting, but that’s another rabbit hole to explore. Acceptable values for this option range from 1 hour to 7 days. While you can be clever and choose something like 42 hours, think about what window of time is appropriate for a business day, whether it’s an 8-hour day or a 24-hour day because you’re 24×7.

For EXECUTION_COUNT, the default value is 30, which is appropriate for an ad hoc workload as most of the time as queries only execute one time. Determining values for TOTAL_COMPILE_CPU_TIME_MS and TOTAL_EXECUTION_CPU_TIME_MS is a bit trickier. The defaults are 1000ms and 100ms, respectively. The settings are milliseconds, but the data in the Query Store table is stored in microseconds; remember this when you’re comparing your settings to what is in Query Store.

Think about the execution time first. Do you have a threshold where if a query requires more than X amount of CPU time, you’re concerned? Maybe 100ms is too low, and 1000ms (1 second) is more appropriate for your environment.

Compilation time is the hardest. I would not recommend setting it below 1000ms until you can look at captured data in Query Store. Understand that both compilation and CPU time are cumulative for these thresholds. If a query executions 5 times (below your EXECUTION_COUNT threshold, but takes 25ms of TOTAL_EXECUTION_CPU_TIME_MS each time, then on that fifth execution it will exceed 100ms and subsequent executions will be captured.

For anyone using SQL Server 2019, I highly recommend using SSMS 18.4, particularly if you use Query Store, or plan on using it. If you’re running SQL Server 2016 or 2017, it’s nice to see those additional settings in the UI, and in general I recommend staying current with releases for all the tools, assuming you don’t have business rules that limit or control what you can install.