This is a demo-centric, short course on how to create and use common table expressions (CTEs) correctly, for developers and DBAs from SQL Server 2005 onward.  Areas I cover include:

Much more to come from the SQLskills team!

While this shows up for the SQL Server 2005 topic, there is no such statement made for the 2008 and 2012 versions of the the books online topic.

I was curious if this 2005-era recommendation still applied for more recent versions.  To test this scenario I made the following changes to the AdventureWorks2012 sample database on version Microsoft SQL Server 2012 (SP1), 11.0.3000.0 Developer Edition:

Now for an initial test, I executed the following single CONTAINS predicate query:

The query execution plan tree (from SQL Sentry Plan Explorer) was as follows:

And the STATISTICS IO output was as follows:

Now for a multi-CONTAINS predicate, I executed the following example:

The query execution plan tree (from SQL Sentry Plan Explorer) was as follows:

The operators remained the same, but we have a change in estimated subtree cost and also a doubling up of cardinality estimates.

As for the STATISTICS IO output, it was as follows:

Logical reads were 34 versus the original 28.

For the last example, I combined the two CONTAINS predicates as follows:

For SQL Server 2005, if you had multiple CONTAINS predicates referencing columns from the same table, your execution plan would show separate remote scan operators for each reference instead of them being combined natively into a single operator.  This behavior seems to have been addressed in recent versions, but if you have seen a variation of this issue given other conditions please share in the comments.  Thanks!

Short and simple post – filed under “Joe – you’ve already forgotten about this twice, so write this down somewhere.”

Let’s say you have deadlock output that shows the following information for the “clientapp” attribute:

Tested on SQL Server 2012 SP1, I can find it with the following query:

I’ve forgotten about this twice over time because the job_id uses a uniqueidentifier data type (in this example, the job_id value is 6CB913B8-E659-4C00-A8CD-542D8A431A2E).  And as an aside, the query execution plan shows a CONVERT_IMPLICIT as I would expect and uses a Clustered Index Seek.

This post, like the previous nine posts on this subject, uses SQL Server 2014 CTP2 as a reference point.  There may be changes by SQL Server 2014 RTM, and if so, I’ll write a post about applicable changes.

To frame this discussion, let’s first discuss what may or may not warrant action…

So what troubleshooting methods and options are available to us?

The new CE story will unfold as customers start upgrading to SQL Server 2014 and I’ll be curious to see which regression patterns are most common.

In previous posts for this series, I discussed how the assumption of independence with regards to multiple predicates against the same table, in absence of multi-column stats, is blunted a bit with the new Cardinality Estimator for SQL Server 2014.  So your estimates may increase for this scenario.

On the flip-side, when it comes to joins between two tables, you may see a reduction in join estimate values for scenarios where there are non-join filter predicates on the tables being joined.

We see that the estimates are spot-on for the Clustered Index Scan and Table Scan, but we have an over-estimate for the Hash Match operation (1,767 estimated vs. 1,003 actual).

Now if I set the database compatibility level to 120 and re-execute the query, here is what we see instead:

We still have identical estimate vs. actual values for the Clustered Index Scan and Table Scan, and now our over-estimate for the Hash Match is less pronounced (1,140 rows estimated instead of the 1,767 rows previously estimated).

For the pre-SQL Server 2014 cardinality estimation process, the assumption is that the non-join predicates for the two tables are somehow correlated (in our example, region_no = 2 and payment_dt = ‘1999-09-02 00:00:00.000’).  This is called “Simple Containment”. For the new Cardinality Estimator, these non-join predicates are assumed to be independent (called “Base Containment”), and so this can translate into a reduced row estimate for the join.

Continuing the subject of exponential backoffs (from the 2nd and 3rd posts in this series), let’s restore the Credit sample database back to the baseline version and execute the following script:

I changed the database to the latest version so we use the new CE and then added four new columns.

Next, let’s update the values of the four new columns using different distributions:

Looking at the estimates for single-predicate queries, if I execute the following, I’ll get an estimate of 1,000 rows:

And lastly (for single-predicate examples anyhow), an estimate of 40 rows:

The estimate for this query is 707.107 with the new CE, which we can derive using the POWER function in T-SQL as follows (I used Excel last time to do this, so see the previous posts for the background information on this calculation):

The estimate for this was 420.448, and we can derive this via the following expression (and notice the order of selectivities goes from smallest to highest):

The estimate is 8.20193 and we can derive this via the following:

The selectivities are ordered from most selective to least selective, and the the less selective values get the “back offs” in order of none, 1/2, 1/4, and 1/8.

Posted in: Cardinality Estimation, Performance
Comments Off on More on Exponential Backoff

This is a demo-centric, short course on how to how to use T-SQL to create and configure databases, files, and filegroups.  Areas I cover include:

There are now 29 courses from the SQLskills team as of today and much more to come.

In the previous post, I looked at root-level cardinality estimates vs. actual row counts across a set of 28 queries).  9 plans had improved cardinality but two of them had significant changes.  One of the plans for the new CE version had a root-level estimate of 11,199 rows vs. 1,468 actual rows.  Compare that to the original estimate of 348 vs. 1,468.

The query in-question was as follows:

And here was the new version of the plan (using the new Cardinality Estimator):

You can see that at the leaf-level, the Cluster Index Scan estimates remain the same, as does the consecutive Compute Scalar. Where it changes is in the Hash Match (Aggregate) operator – with the new CE estimating 11,200 rows versus the old estimate of 348.

Out of curiosity, I changed the original query to group by just OrderQty and another query to just group by UnitPrice (in other words – was the estimate issue related to our OrderQty * UnitPrice expression, or were the skews introduces at the single-column level?) Here was the OrderQty grouping query and plan tree (ignoring the useless nature of averaging the column you’re already group by):

And here was the UnitPrice query and plan tree:

No large skews for the prior two queries, compared to our original (OrderQty * UnitPrice) skew – shown below in plan tree form:

Aside from the standard methods of evaluating single-column statistics (do they exist, are they up to date, do I need to change the sampling) – I then wondered if some of the legacy methods for helping improve estimates would still apply?  For example, would adding a calculated column help?

Re-executing the original query, I saw the following plan tree (with auto-created stats to the rescue associated with the calculated column):

I wish I could look at the query_optimizer_estimate_cardinality results for the old version of the CE to compare the event output to the new CE.  I know it isn’t possible, but it would have been more helpful to understand what changed regarding the Hash Match (Aggregate) estimate.  As an aside, the exact math behind the estimates are hidden both in the new and old versions – so perhaps a comparison of calculators in this scenario would still be limited?

Regarding XE information, there were 12 query_optimizer_estimate_cardinality events raised for query with the larger estimate skew.  The second event out of the 12 events raised had the following calculator output (and it is interesting to see the SingleColumnStat reference in this output followed by two column names – but I believe this just means both single-column stats were loaded):

And the stats collection was as follows:

The stats collection was interesting to me as it was our first appearance out of the 12 events of the GROUP BY estimate – 11,199.81 (show earlier in the plan tree rounded up).  The loaded stats StatsId of 5 was for the UnitPrice column and the StatsId of 6 was for the OrderQty column.

This answer is, multi-column stats were indeed helpful:

We do see now a reference to MultiColumnStat in the CalculatorList for one of the query_optimizer_estimate_cardinality events:

And we see the new stats object was loaded instead of looking at the two individual stats objects:

So we see that with skews introduced in the new CE – similar to previous versions and depending on the query and schema, multi-column stats and calculated columns can still be helpful in reducing the CE skew. 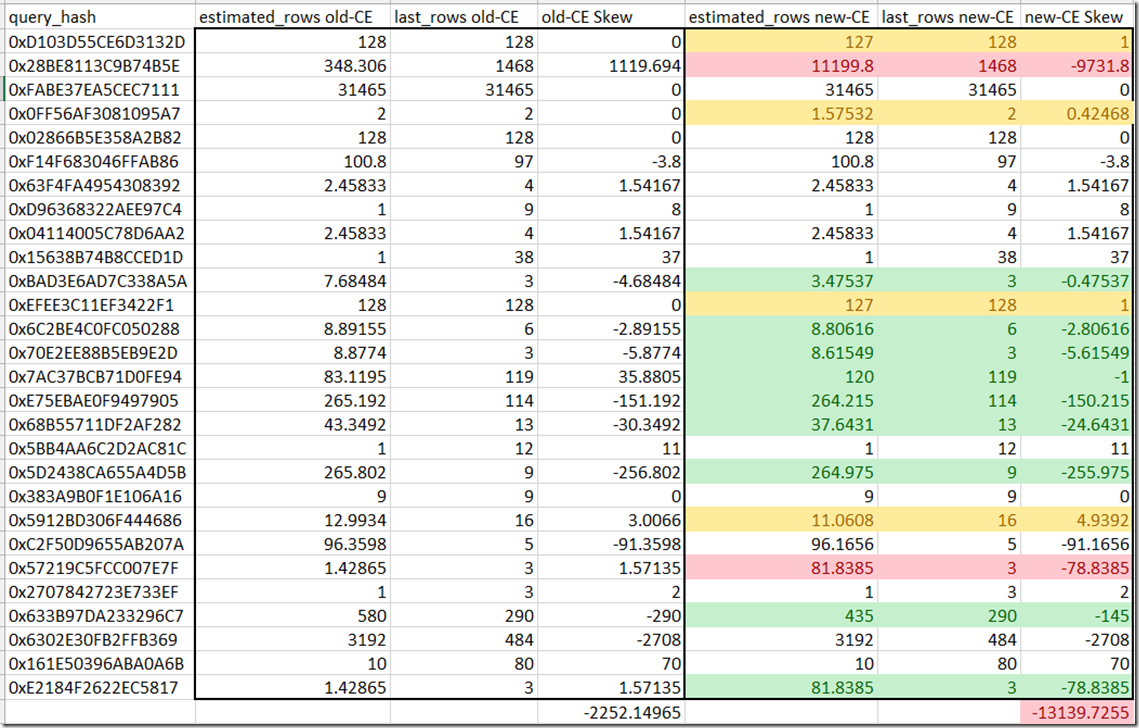 In this post I just wanted to step back and discuss how to enable and identify the Cardinality Estimator version, at least as it stands in SQL Server 2014 CTP2.

As you saw for earlier posts, I see the new CE behavior by changing a database’s compatibility level as follows:

Then when I execute a query within the database, looking at the execution plan I see the following attribute in the StmtSimple element:

Note that if my database compatibility level was for an earlier level, I see the following: