Well, I had a second post already planned and partially written but a comment on the first post (in what’s going to become a multi-part series) has made me decide to do a different part 2 post. So, make sure you read this post first: Locking, isolation, and read consistency.

The comment was about how read committed using locking has inconsistencies – and, yes, that’s true. Read committed using locking is prone to multiple inconsistencies; there are things you can do to reduce some anomalies but in a highly volatile OLTP environment you will get inconsistencies for long running readers. This is why having a secondary server for analysis is always a great idea. Then, everyone gets the same version of the truth – the point in time to which the secondary was updated (is that nightly, weekly, monthly?). Now, if the secondary is getting updates through transactional replication, you are back to the same problem. But, here, I cannot imagine NOT using read committed with versioning. Probably one of the BEST places to use versioning is on a replication subscriber. Replication won’t be blocked by readers and readers won’t be blocked by replication: 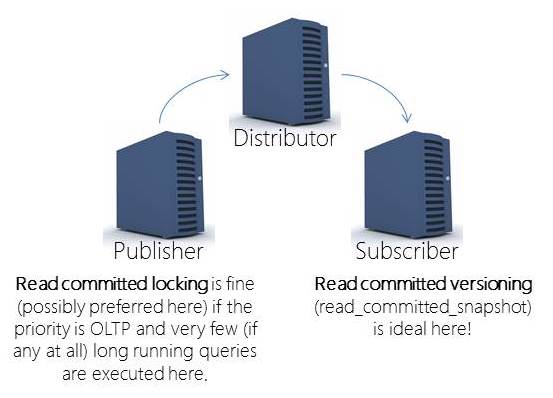 Why is read committed with versioning preferred for readers?

More and more, we’re being tasked with analyzing “current” data. This is harder and harder to do without introducing anomalies. So, I’ll discuss non-repeatable reads in the bounds of a single statement. To get this to occur with a small data set and without setting up a bunch of connections, etc. I’ll engineer the anomaly.

So, to setup for this example – we need to:

(2) Leave the compatibility mode at the level restored (this will use the legacy CE). Consider testing with the new CE but for this example, the behavior (and all examples / locking, etc.) don’t actually change.

The table has NO nonclustered indexes and ONLY a clustered index on lastname. The data is essentially ordered by lastname (not going to get technical about what the data looks like on the page here or the fact that it’s really the slot array that maintains order not the actual rows… for this example – the logical structure of the table is good enough to get the point).

(4) So, now that the table has been created – we will start by creating a problem (a row that will end up blocking us):

Don’t get me wrong – this is a horribly bad practice (to have interaction in the midst of a transaction and to only send part of the transaction… if you walk away – SQL Server is incredibly patient and will hold locks until the transaction is finished [or, killed by an administrator]). But, the point… now our table will essentially look like this:

If you’re interested, check out sys.dm_tran_locks to see the locks held at each point of this example…

(5) So, now that the table has a locked row, we will try again to get a row count. Go back to the FIRST WINDOW and JUST re-run the query to get a count:

This will be blocked. And, it will sit blocked until the transaction finishes (either through a commit or rollback OR by being killed – none of which we’ll do…yet ).

So, what’s interesting and we need a bit of back-story to fill in is that our count query reads ONLY committed rows (we know that – it’s read committed locking). What a lot of people don’t know is that the row-level shared locks are released as soon as the resource has been read. This is to reduce blocking and because there’s no need (in read committed ) to preserve the state of the row (like repeatable reads does). And, I’ll prove that with an update…

(6) Now we’ll update a row that’s just sitting there and not locked (but, may have already been counted [locked, read, and then the lock was released] by our count query).

THIRD WINDOW – update and move a row that was already counted

OK, now here’s another horribly bad practice (not using a key for a modification). But, this table has all sorts of problems (which is what makes it a wonder example for this). And, if I don’t go with something that’s efficiently indexed for this update then the locking would be different. I NEED to get row-level locking here. So, I have to do the update above. And, now what’s happened:

(7) Now, it’s time to “complete” the transaction that was blocking our count query.

Go back to the SECOND WINDOW and complete the transaction (to be honest, you can COMMIT or ROLLBACK – it really won’t matter for this example):

(8) Step 7 will have unblocked the row count query so all you need to do is go back to the first window and check the count that’s sitting there… which will be 10001  rows in our table that only has 10000 rows. Why? Because you were NOT guaranteed repeatable reads even in the bounds of a single statement.

Why read committed with versioning solves this problem?

When you change the database to read_commmitted_snapshot you change ALL read committed statements to use version-based reads. The best part is that we’ll never WAIT for in-flight rows nor will we see rows whose transactions completed within the bounds of your statement [the longer running the statements the more that this is possible]. The incorrect count would not occur for a few reasons but I’ll create a list of the reasons here:

When the row modification (t1) is made – the row will be versioned (SQL uses “copy on write” / “point in time” = snapshot) to take the BEFORE modification VERSION of the row and put it into the version store.

When the count begins it will just quickly continue (and not be blocked by the X lock held on the ‘Gohan’ row). This is not a problem, the columns are changing but the row is not being deleted – yes, we should count that row.

If I could switch to the window and run the update fast enough, it too would not be blocked by the version-based read NOR would the moved row be visible (even if it made it there in time) by the version-based read because it’s new location (handled as an INSERT) would be NEWER than our count statement’s START time. Our count will reconcile to the point in time when the statement BEGAN. Nothing is blocked and those changes (even when committed before we get there) are NOT visible to our version-based read.

Yes, read committed with versioning is often MUCH preferred over read committed using locking. But, versioning does come at an expense. You do need to do monitoring and analysis of THE version store (in THE tempdb). Someday (SQL Server 2016???) maybe we’ll multiple tempdbs (that would be awesome) and ideally, we’ll have some nice capabilities for controlling / limiting version store overhead (of one database over another). But, for right now – you have to make sure that your tempdb is optimized! And, if you have an optimized tempdb and you don’t have a lot of really poorly written long-running queries, then you might find out that the overhead is less than you expected. This is absolutely something that you should be not only considering but using!

Plus, be sure to review Paul’s tempdb category for other tips / tricks, etc.

OK, so now the originally planned part 2 is now trending to be part 3. Depending on questions – I’ll get to that in the next few days!

Thanks for reading,
k

I know. I don’t blog often. For me, it’s one of the first things to go off of my “extra stuff to do” list. I