Last week’s survey was on how you should store large-value character data in SQL 2005+ (see here for the survey). Here are the result as of 4/3/2009 – and I think my favorite answer is starting to catch-on: 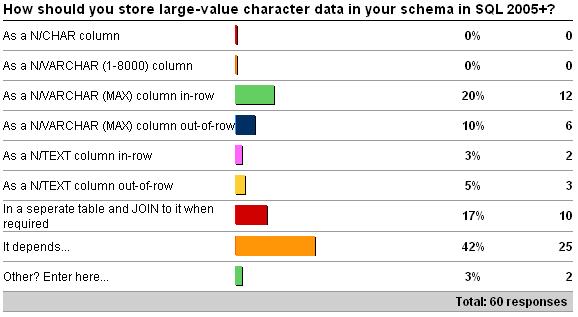 My favorite answer is, of course, it depends! For all those who didn’t answer ‘it depends’, your answer is valid, but only for particular circumstances, as each method has its pros and cons and won’t be applicable in all cases. It’s extremely important when designing a schema to consider how to store LOB data, as making the wrong choice can lead to nasty performance issues (where ‘performance’ is a catch-all to include things like slow queries, fragmentation, and wasted space). Now I’d like to run through each of the options and detail what I think of as the pros and cons. A couple of definitions first: ‘in-row’ means the column value is stored in the data or index record with the other columns; ‘out-of-row’ or ‘off-row’ means the column value is stored in a text page somewhere in the data file(s), with a physical pointer stored in the data/index record (taking either 16 or 24 bytes itself).

So, as you can see, the best answer for a general question like this is definitely It Depends!. Although I haven’t covered every facet of each storage option, the aim of this post is to show that it is very important to consider the implications of the method you choose, as it could lead to performance problems down the line.

4 Responses to Importance of choosing the right LOB storage technique