(This is also the Ponderings – editorial – in today’s SQLskills newsletter.)

I want to start out this post by sincerely thanking everyone who emailed me or commented about depression, after the last newsletter/post. It definitely seems that there’s a lot of it about, from situational depression (like I think I have – doctor video appointment this afternoon!) caused by the traumatic last 12 months, or long-term depression that some of you have told me about, including close friends about which I had no idea. All the supportive messages are much appreciated and I think I’m slowly on the mend. 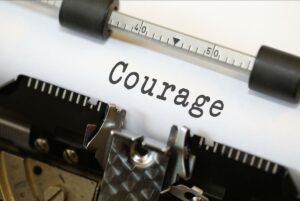 One thing that stood out for me was the number of people who thanked me for having the courage or bravery to speak out publicly about my feelings. I really had no idea that there was so much stigma attached to an admission of depression in wider society. I honestly didn’t think I was being brave, I just thought it would be helpful for others in the community to hear about a problem that they might be suffering from too, possibly without realizing it. I’m a pretty open person, and used to sharing thoughts and feelings here and places like the newsletter, Twitter, and Facebook, but now I understand the stigma, and I understand the comments.

My Mentoring Class of 2020 has been patiently waiting for replies in email threads for a while, as I’ve been dealing with things this year, but I’ve already seen some great examples of courage from them, which might show some of you that it’s possible to do what you’ve been scared or concerned about doing.

Public speaking: several people want to start speaking at user groups but are scared of public speaking. I used to be too, and I still am when it comes to speaking about anything I’m not *used* to talking about, or random questions in a live interview. I didn’t really start speaking in public a lot until TechEd 2006 in Boston (where I met Kimberly!), and I agonized about it for weeks, and spent a lot of time training myself to not say err or um (write a long technical paragraph, learn it by heart, and then practice reciting it, starting over each time you say err or um – took me about a week on my hour-long commute to Microsoft). Some people say the most frightening thing for them is public speaking, as you’re laid bare for all to see. The more you do it, the easier it becomes, but I still get butterflies before any public speaking. And I say booooo to anyone who derides a new speaker for making mistakes.

Changing jobs: I think 8 people from my Class of 2015 ended up changing jobs, and it looks like several of the Class of 2020 will as well. Sometimes it’s a no-brainer because the current job is a dead-end, or the working conditions or benefits are bad, or the new job has much more money/benefits/responsibility/something else. Sometimes it can be a leap of faith, so to speak, because you’re not sure whether it’s the right move or you’ll succeed in your new role. I had that dilemma in 2007 when deciding to leave a very successful career at Microsoft to join Kimberly at SQLskills, doing training and consulting, that I’d never done before, *especially* considering that I was a new public speaker. It turns out it was the best move I could have made, and I’m glad I had the courage to leave Microsoft.

And there are plenty more examples of things that require courage:

And there are so many more, both at work and in non-work life.

My message: plenty of things in life take courage. We all have courage within us to confront difficult situations. Sometimes it may be buried deep and take some coaxing out (like overcoming my dread of public speaking). Don’t be afraid to find your courage!