I recently was helping a client who was trying to use SQL Server Data Tools 2015 to update and generate reports that would be deployed to SQL Server Reporting Services 2012. When trying to deploy the report, the client would get the following error:

I knew that SSDT 2015 should be backwards compatible and able to work with multiple versions of SQL Server products, so I had to do a little research to figure out what exactly needed to be changed in order to publish a report to SSRS 2012.

In my lab, I created a new project named GetDatabases. This project was a basic report that would get query a system table. The first thing I tried to change in the project was the TargetServerVersion located under the project properties. 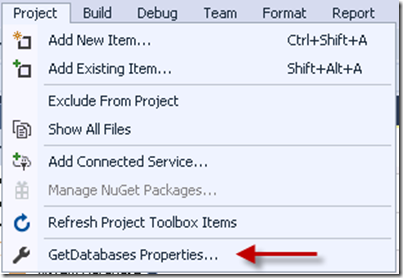 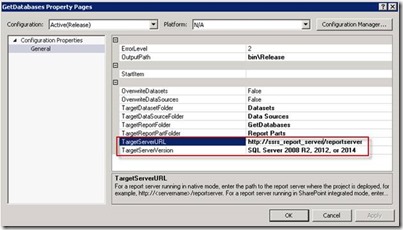 After making these changes, I was still unable to deploy the report. After a bit more research, I found a location to change the default deployment server version of the Business Intelligence Designer. This is located under ‘Tools and then Options’. The default was set to version 13.0, once I changed the version to 11.0 to match the server I was deploying to, I was able to successfully deploy my report to SSRS 2012. 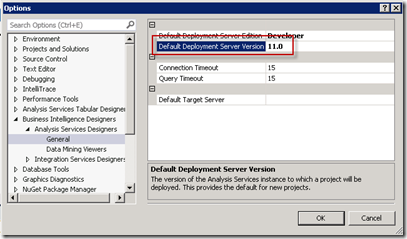 It seems odd to me that I would have to change the overall behavior of SSDT instead of just the properties of my project, however I confirmed with my client that they couldn’t deploy until they modified the default deployment server version.

I hope this helps if you are having similar issues.