Back in 2009 I started posting a summary at the end of the year of what I read during the year (see my posts from 2009, 2010, 2011, 2012) and people have been enjoying it, so I present the 2013 end-of-year post. I set a moderate goal of 60 books this year and I managed 56. Next year I want to get through some of the really large historical and biographical books I’ve been putting off so I’m setting myself a goal of 40.

There were several strong candidates for my favorite book this year (including Cutting for Stone by Abraham Verghese, The Known World by Edward P. Jones, and Great North Road by Peter F. Hamilton) but I have to choose The Hydrogen Sonata by Iain M. Banks, in honor of my all-time favorite author for the last 25 years who died tragically early in June this year after a short fight with gallbladder cancer. I’ve read all of his sci-fi novels several times and most of his regular fiction (published as Iain Banks) and I wish I could have met him to thank him for his work. I actually cried when I heard he’d died and even writing this I have a lump in my throat. RIP Iain – you are sorely missed by your fans. 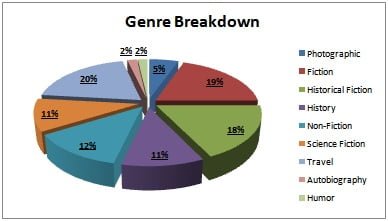 The average book length was 443 pages, 26 pages shorter than last year. Quite interestingly, I read about half the amount of historical fiction this year compared to 2012, and made up for that with more non-fiction and history, and many more travel books.

Once again I really struggled to pick a top-10 this year as I read a lot of truly *superb* books in 2013. I didn’t want to leave any out of my short list and deny you the chance of having them suggested so I present you with my top-15! If you don’t read much, at least consider looking at some of these in 2014. It’s impossible to put them into a priority order so I’ve listed them in the order I read them, along with the short Facebook review I wrote at the time. 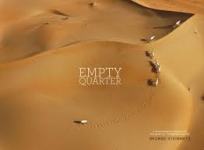 #2 Empty Quarter: A Photographic Journey to the Heart of the Arabian Desert; George Steinmetz ; 208pp; Photographic; January 8; (Stunning aerial photography of the Empty Quarter of Arabia in Oman, Yemen, Saudi Arabia, and the United Arab Emirates. I’ve been fascinated by this area of the world since reading books like Thessiger’s Arabian Sands and its on my list of places to see before I die. This is the next best thing – 2– plates shot from a microlight 1000 feet up – just stunning! I’ve got several more of Steinmetz’s photography books in my plans this year. Strongly recommended!)

#6 Stonemouth; Iain Banks; 356pp; Fiction; February 3; (Read most of it on the plane down from Seattle to Tampa – a real page turner. I haven’t read much of Banks’ non-science fiction since I was put off by Dead Air a while back. This book is really excellent though and I’d recommend it to anyone. Reminds me of some of my life in my early twenties.)

#7 Lionheart; Sharon Kay Penman; 608pp; Historical Fiction; March 5; (Finished this on the flight from Kushiro to Tokyo. Great part 4 of the series covering the Angevin empire in the 1100s. This book really covers the 3rd Crusade and Richard’s involvement in it – a topic I’ve read a lot on but never read a fictionalized account of. Penman doesn’t disappoint and I strongly recommend this book to historical fiction fans.)

#8 King Hereafter; Dorothy Dunnett; 736pp; Historical Fiction; March 17; (Brilliant fictionalization of King Macbeth in the 11th Century. A very long book (730pp) with very dense writing and small font that made it feel like 1500pp really. Dunnett does an awesome job of describing the people, places, and society and I’m looking forward to reading her Lymond and Niccolo series. Strongly recommended.)

#22 Secretum; Monalid & Sorti; 812pp; Historical Fiction; June 18; (An excellent sequel to Imprimatur that I read last year, this is set 17 years later, in 1700 in Rome, with the same protagonists involved in intrigue, subterfuge, and adventure. Intermingling meticulously-researched history and real characters, the book deals with the wrangling over the Spanish Succession leading up to the death of Charles II of Spain. Highly recommended.)

#28 American Rust; Philipp Meyer; 384pp; Fiction; July 9; (Excellent drama set in recently declining Pennsylvania steel country. Hard to describe the story line except to say it’s told from the points of view of six people linked to single act of violence that sets a bunch of stuff in motion. Great new author for me to discover – recommended!)

#31 The Known World; Edward P. Jones; 432pp; Historical Fiction; July 14; (Really excellent and powerful novel about slavery in mid-1800s Virginia, and one of the best books I’ve read this year, although I stopped midway to read #29 and #30. Barbarous to think of people as property, and that a husband could be freed and then have to work up to paying for the eventual freedom of his wife and children. Runaways, if they were caught, could expect to be ‘hobbled’ by severing one of their Achilles tendons – nasty. Strongly recommended.)

#34 The Orchardist; Amanda Coplin; 448pp; Historical Fiction; July 18; (Excellent novel, set just outside Leavenworth, WA around the end of the 19th Century. Complicated story, which I’ll spoil if I relate too much here. Based around a man who had his own orchard and his life is interrupted and changed forever when two runaway girls enter his land and his life. Definitely a candidate for best book so far this year and highly recommended.)

#36 Cutting for Stone; Abraham Verghese; 688pp; Fiction; July 23; (Wonderful book! Hard to describe the plot without giving away what happens in the book. Written by a surgeon, with lots of factually accurate descriptions of surgeries and medical issues. Follows the life of a family in Addis Ababa in the ’60s and ’70s, with drama and betrayals. Masterfully written, became a two-day page-turner for me after dithering about buying it since it came out. Very strongly recommended.)

#41 The Technologists; Matthew Pearl; 555pp; Historical Fiction; August 17; (I really enjoyed Pearl’s The Dante Club a few years ago so was looking forward to this book. The story is set in 1868 when the first class of M.I.T. is about to graduate. Boston is rocked by a serious of large-scale terrorist acts and some of the M.I.T. students investigate and bring the perpetrator to justice. Excellent novel – recommended.)

#50 City of Djinns; Walter Dalrymple; 352pp; Travel; December 5; (This excellent book covers a year that Dalrymple and his wife lived in Delhi researching the city’s history and meeting people in it. He nicely weaves in the history of the city’s various rulers, conquests, and cultures, while also vividly portraying the people in his life there. I’m looking forward to reading the next book of his on my list, and visiting some of the shrines and forts he describes on our next trip to India.)

#52 I, Mona Lisa; Jeanne Kalogridis; 544pp; Historical Fiction; December 14; (The novel is set in Florence in the late 1400s, and covers the time around the downfall of the Medicis and the rise and fall of Fra Savonarola. It centers on Madonna Lisa (the subject of da Vinci’s painting), who becomes intricately involved in all the politics and subterfuge of the time. Excellent and recommended.)

#53 Walking the Amazon; Ed Stafford; 320pp; Travel; December 16; (What an incredible journey this guy did! 8000km over more than two years, going through some of the worst jungle on the planet, and all walking. The book’s very well written and conveys the mental and physical adversities Stafford overcame to complete the journey. A great read and inspiring too.)