This Extended Event Session monitors a number of critical events in the system but one of the problems with figuring out what exactly this Event Session is monitoring is to figure out what all the predicate values on the sqlserver.error_reported event are actually firing on.  To that aspect of things, we can do a quick reuse of the predicate on this event be doing a replace SSMS on the [error_number] value with a replace for an alias to a query to sys.messages, on the message_id column from the DMV as follows:

This will give us a list of the error messages that the Event Session will actually fire events for:

Based on this output, and the output of the following query:

We can deduce the following about the Event Session:

For the purposes of generating a random workload against AdventureWorks2008R2, I created a workload generator that can be found on my blog post The AdventureWorks2008R2 Books Online Random Workload Generator.  I used this with 2 different PowerShell Windows from SQL2012-DRU1 and SQL2012-DRU2 to run a random workload across multiple sessions against the SQL2012-DB1 server.  To capture the trace data required for performing the replay, SQL Server Profiler was used along with the TSQL_Replay template to create the capture. 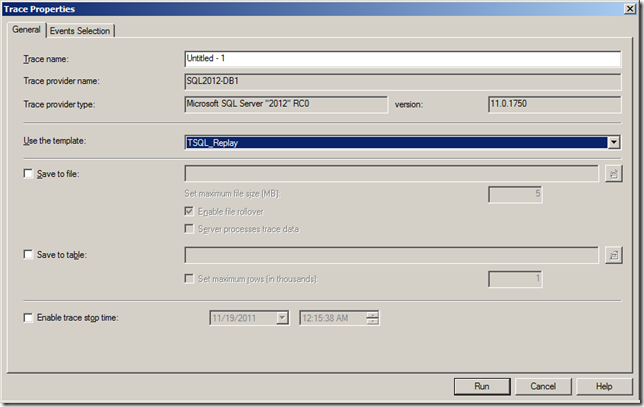 For production systems, the best way to go about capturing a Replay Trace is to script the trace definition to a file, and then create the trace as a server side trace that is writing to a trace file on local disks for the server.  This has a significantly lower impact that tracing directly from Profiler, which uses the rowset provider for Trace.  With the replay trace running, and the workload generating events I waited for the trace to collect around 80000 rows of data and then shutdown the trace so that I could access the trace file to copy it from the SQL2012-DB1 server to the SQL2012-DRU server where the Distributed Replay Controller is installed. 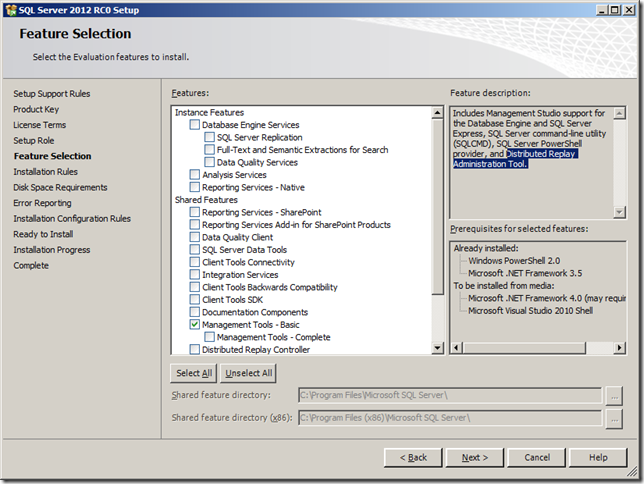 Once the Management Tools Basic have been installed the server will have to be restarted and then it is possible to make use of the DReplay.Exe executable to administer the Distributed Replay components on the controller server. The DReplay executable has multiple options that can be discovered by using a –? from the command line as follows:

Verbs:
preprocess Apply filters and prepare trace data for intermediate file on controller.
replay     Transfer the dispatch files to the clients, launch and synchronize replay.
status     Query and display the current status of the controller.
cancel     Cancel the current operation on the controller.
-?         Display the command syntax summary.

To perform the preprocessing, you will need to do a couple of different steps.  The first thing you need to do is edit any options that you want to set for the pre-processing by editing the DReplay.Exe.Preproces.config file in the C:\Program Files (x86)\Microsoft SQL Server\110\Tools\Binn path on the server.  There are two configuration files for DReplay.Exe as highlighted below.  At this time make sure that you are only editing the Preprocess.config file.

The DReplay.Exe.Preproces.config file contains a schema defined XML document that controls the configuration of the preprocessing.  In general the options set for preprocessing should not need to be changed but if you want to include system sessions as a part of the replay, you can change the options in the XML, which is listed below.

To preprocess the trace data, open a new command prompt window and change directories to the C:\Program Files (x86)\Microsoft SQL Server\110\Tools\Binn path.  The trace file has been copied onto the SQL2012-DRU server as C:\DReplay\SQL2012_ReplayTrace.trc.  To preprocess this file first start the “SQL Server Distributed Replay Controller” service by using NET START:

Then execute the following command from within the Binn path to actually preprocess the trace file and output:

This will process the trace file and output the working files for performing the Distributed Replay to the C:\DReplay path.  Below is a screenshot of the full window for preprocessing the trace file. 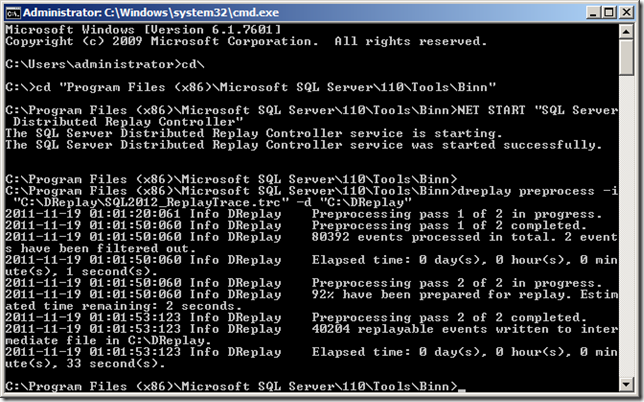 Note: The dreplay executable can be called from any path within the server because the Binn path is a part of the Path Environmental variables.  However, the executable has to be called from within the Binn folder to access the necessary .config files and .xsd schema files for the configuration.  If you want to be able to run this executable from another location on the server, you will need to copy the .config and .xsd files out of the Binn folder to the folder that you want to be able to run dreplay within for it to work.

The first step in performing the replay is to start the “SQL Server Distributed Replay Client” service on each of the replay clients using NET START.

You will want to verify that each of the clients was able to successfully connect to the controller in the logs as shown in the previous post in this series.  Once this has been done, your environment is almost ready for replay.  For the purposes of this blog series, a SELECT only workload has been generated for replay against AdventureWorks2008R2.  However, in most environments you won’t have a SELECT only workload, so you will have to plan for and prepare your replay environment using a BACKUP/RESTORE of the production database from a point within the captured workload so that the database can be replayed against without having problems associated with Primary Key constraint violations during the replay.

If you want to change any of the parameters associated with the replay operation, you can edit the DReplay.Exe.Replay.config file in the C:\Program Files (x86)\Microsoft SQL Server\110\Tools\Binn path.  The default contents of the configuration file are shown below:

Before performing the actual replay, make sure that the account being used to run the SQL Server Distributed Replay Client service has been granted appropriate access to the target SQL Server and database to be able to perform the replay operations.  Once this has been done replay can be performed using the command line options for DReplay.Exe by providing the appropriate switches, or you can alternately provide the –c command line switch to specify the configuration file that should be used for performing the replay.  If you change any of the default values listed above in the DReplay.Exe.Replay.config file, you will need to specify the –c command line switch for those to take effect.  To perform a replay with the defaults, the following command line execution can be run:

Once this is executed, the Distributed Replay Controller will take read in the preprocessed replay file, and then synchronize the replay across all of the clients specified with the –w command line parameter.  While the replay operation occurs, the command window for the controller will output periodic updates about the current status of the replay process.

The frequency of the status updates can be controlled using the –f command line switch to specify the number of seconds between each of the updates.  Each of the status updates will provide information about each of the clients including the total number of events that have been replayed, the success rate of the replay operations per client, as well as an estimate for the total amount of time remaining to complete the replay operation.  When the replay completes the total elapsed time and pass rate for the events is output.

In the next and final post in this series, we’ll look at some of the common problems with using Distributed Replay and how to resolve them, including manually configuring the Controller and add additional Client Service accounts to the environment after Setup has been completed.

Over time, I’ve had a number of reasons to need to run a random workload against SQL Server to be able to demonstrate troubleshooting, how SQLOS works, and most recently how to capture a Replay Trace for my series on the Distributed Replay Utility in SQL Server 2012.  For a while I’ve maintained a large workload script that I would run using multiple sqlcmd command line windows to fire off the workload, but one of the problems with this has been that it was incredibly predictable, and it didn’t scale the way I really wanted it to.

When I was working with Distributed Replay, this became somewhat problematic with generating a randomized workload to capture a Replay Trace off of, so I took a few hours and went back to the drawing board with my idea.  What I came up with was a large script file that contains all of the SELECT statement examples from the SQL Server Books Online (http://msdn.microsoft.com/en-us/library/ms187731.aspx).  This script is divided into separate sections using a delimiter, and then I wrote a PowerShell script that reads the file and breaks it down into individual scripts that are randomly executed against the configured SQL Server using SMO.

The two files required to make use of this are attached to this blog post and can be used with minimal modifications against any SQL Server 2008+ system that has the AdventureWorks2008R2 database attached to it.  To make use of the PowerShell script, you will either have to sign it, or if you work like I do in my VMs, allow unsigned script execution with Set-ExecutionPolicy Unrestricted.

The PowerShell script is incredibly simple code wise.  It loads the SMO assembly, splits the file contents on the delimiter, then inside a infinite loop, it picks a random query and executes it against the SQL Server.

#Get a server object which corresponds to the default instance
$srv = New-Object -TypeName Microsoft.SqlServer.Management.SMO.Server $ServerName

# Disconnect from the server
$srv.ConnectionContext.Disconnect();

To generate random workloads, I generally fire up 3-5 copies of this script on a client concurrently and leave it running in the background to generate the load.