Back in 2009 I started posting a summary at the end of the year of what I read during the year (see my posts from 2009, 2010, 2011, 2012, 2013) and people have been enjoying it, so I present the 2014 end-of-year post. I set a moderate goal of 40 books this year and I managed 53. I wanted to get through some of my larger non-fiction books but ended up not doing as many as I thought (reading more, shorter books), and it’s just coincidence that my total works out to about a book per week. Next year I’m setting myself a goal of reading 60 books.

There were several strong candidates for my favorite book this year (including Command and Control by Eric Schlosser and Reamde by Neal Stephenson) but I’m choosing Natchez Burning by Greg Iles. It’s a fantastic and shocking drama that I knew as I read it that it was the best book I’d read this year. You can read my review of it in the top-10 list below. 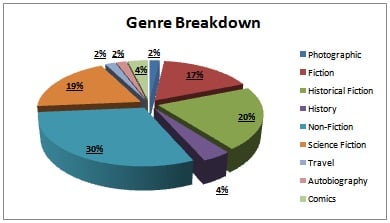 The average book length was 536 pages, almost 100 pages longer than last year. Quite interestingly, I dropped travel and history this year in favor of non-fiction books, which was my goal. Fiction and historical fiction were the same as last year, and sci-fi was almost double.

I read a lot of really good books this year, but I didn’t struggle to get to a top-10 as I had in previous years. If you don’t read much, at least consider looking at some of these in 2015. It’s impossible to put them into a priority order so I’ve listed them in the order I read them, along with the short Facebook review I wrote at the time.

#7 Command and Control; Eric Schlosser; 640pp; Non-Fiction; February 16; (Absolutely excellent history of US nuclear weapon control (or lack of it), accidents involving US nuclear weapons, and US nuclear strategy from the 40s to the 80s. Really shocking how close the US came to an accidental nuclear detonation several times. it also covers the Damascus accident in great detail, along with the almost laughable ineptitude of the Air Force and SAC in dealing with it. There are very comprehensive notes and sources, which actually led me to buy another 15 or so books over the last two weeks on related topics. Highly recommended – excellent book.)

#9 Line War; Neal Asher; 566pp; Science Fiction; February 27; (This is an excellent finale to the Agent Cormac series, nicely wrapping up all the plot lines and leaving things set for continuations with some of the characters in other books. Hard to say anything else about the book without giving away major spoilers, but plenty of good battles and AI intrigue. Looking forward to reading The Gabble and Technician by him next. Strongly recommended (reading the Agent Cormac series in order).)

#11 The Martian; Andy Weir; 369pp; Science Fiction; March 7; (Really excellent modern-day Robinson Crusoe story about an astronaut accidentally stranded on Mars after a hurried mission abort during a major dust storm. Very believable and no credibility stretching – a brilliant debut from Weir. I cruised through this in about 8 hours. Highly recommended and I’m really looking forward to Weir’s second book.)

#14 The Dead Hand: The Untold Story of the Cold War Arms Race and Its Dangerous Legacy; David Hoffman; 608pp; Non-Fiction; March 23; (Really excellent book I picked up while reading Command and Control earlier this year. This book details the hidden Soviet bioweapons programs that existed all the way up to the 90s (anthrax, plague, tularemia, and even smallpox, after it had been eradicate by WHO, for goodness sake!) during the Cold War. The Soviets lied to the world, and Gorbachev and Yeltsin continued to lie after the fall of the USSR in ’91. It also explains the ‘dead hand’ semi-automatic mechanism to allow retaliation by the Soviets after a decapitative nuclear strike against them. Most alarming is the telling of how the a Soviet Union fell apart and left thousands of tons of bioweapons, enriched uranium and plutonium, and nuclear weapons spread across the various republics and Russia without adequate storage, security, and safeguards to stop profiteering and proliferation to rogue states like Iran. Interesting to read about how some parts of the US govt stepped in to buy uranium from Kazakhstan to stop it falling into the wrong hands, and built secure storage for Russia. Well worth reading. Not an alarmist, sensational book at all, but an insightful and level-headed description of what went on. Contains a lot about the transfer of power to Gorbachev, his meetings with Reagan, and his fall from power that I hadn’t read about before either. Strongly recommended.)

#17 The Sunne in Splendour: A Novel of Richard III; 944pp; Historical Fiction; April 26; (Sharon Kay Penman’s novels are excellent historical fiction, meticulously based on actual history. In this book she follows the life of Richard III, steeped in betrayal and treason against both himself and his brother, the earlier Edward IV (with Edward V only reigning for a few months until pronounced illegitimate). In more than 900 pages of small-font, the book is huge and a long, engrossing read. Penman puts the death of the infamous ‘princes in the Tower’ at the hands of the Duke of Buckingham, which makes a lot of sense given that neither Richard nor Henry Tudor (later Henry VII) had both motivation *and* opportunity to do the deed. Altogether a splendid book, and I strongly recommend it for all fans of history.)

#19 The Quarry; Iain Banks; 326pp; Fiction; May 10; (This is the last book that my favorite author of all time, Iain Banks, wrote before he died last year. It’s quite excellent. The dying character is irascible, bitter, and filled with justifiable invective against elements of the world and I have to imagine this is semi-autobiographical. It’s a great story and a fitting final novel. I think I’ll have to go back and re-read Banks’ non-sci-fi books (already read the sci-fi ones several times each). Thanks Iain – RIP.)

#21 Duty: Memoirs of a Secretary at War; Robert M. Gates; 617pp; Non-Fiction; May 25; (This memoir describes Gates’ time as the Secretary of Defense under Presidents Bush (43) and Obama. Gates comes across as someone who really cares about the service men and women under his command (as second in the chain under the president).This is reiterated many times through the book when he describes budget battles to get more equipment, better equipment, the right equipment, unwanted/unneeded equipment cancelled, and more against parochial members of Congress and inexperienced White House staffers. He seems to have been a very, very different SecDef than his predecessor Rumsfeld, whose autobiography I now look back on with a much more negative view. Different how? Nicer is probably the easiest way to say it, just a nicer, more caring person. He looks back several times and wishes he’d handled a situation better and done things differently for the benefit of the troops. He takes personal responsibility for everything that happened on his watch, rather than blaming others (a failing of Rumsfeld.) The book also gives a lot of insight into the workings of the Department of Defense, the largest organization on the planet, with 3 million ‘staff’, and a budget of more than $700 billion in 2011. Altogether a very interesting book and well worth reading. I’m looking forward to reading the memoirs of the presidents and other cabinet members from the last 10-15 years too. Highly recommended.)

#40 D-Day: The Battle For Normandy; Antony Beevor; 608pp; History; September 10; (Absolutely excellent narrative of the D-Day landings and the following several months of fighting up to the liberation of Paris. What seems obvious is that there was incompetence on both sides, especially around Field Marshall Montgomery on the Allied side and Hitler’s incessant micro-management of the German side, that led to greater losses or troops, civilian French, and widespread destruction in Normandy. I’m not a big war-history buff (yet!) but I found this a thoroughly engrossing book rather than just a dry battle chronology. I really liked that way Beevor could conjure up little vignettes of action to highlight interesting points in the wider battlefield. Highly recommended!)

#50 Natchez Burning; Greg Iles; 800pp; Fiction; December 21; (This is easily the best book I’ve read this year, and is fantastic. It’s long, really involved, and deals with a murder case on the Mississippi/Louisiana border. Apparently it’s the fourth in a series about the main character – so I just bought the first three to add to my pile of unread books. The book is centered on the extreme racism in that area in the late 1960s and its continuation in some cases today, and is quite shocking in parts. The writing is superb, with rich characters and excellent dialog. I’m very glad I took a chance on this after seeing it reviewed in the W.S.Journal. Strongly recommended, but definitely not for the faint-hearted.)

And the complete list, with links to Amazon so you can explore further. One thing to bear in mind, the dates I finished reading the book don’t mean that I started, for instance, book #2 after finishing book #1. I usually have anywhere from 10-15 books on the go at any one time so I can dip into whatever my mood is for that day. Some books I read start to finish without picking up another one and some books take me over a year. Lots of long airplane flights help too!