For the record, I mostly read ‘real’ books – i.e. not in electronic form – I really don’t like reading off a screen. Yes, I’ve seen electronic readers – we both have iPads – but I don’t like reading electronically. Having said that, I did read 13 books electronically this year out of necessity (insurmountable luggage weight and volume restrictions on one of our dive trips). I also don’t ‘speed read’ – I read quickly and make lots of time for reading.

I went back-and-forth over the last few days about which book to nominate as my favorite, and I couldn’t come to a decision, so just like in most years, I give you my favorite 3 books: The Garden of Evening Mists by Tan Twan Eng, The Perfectionists: How Precision Engineers Created the Modern World by Simon Winchester, and The Grapes of Wrath by John Steinbeck. All three are superb books and I strongly recommend you give them a try – I was tempted to pick The Grapes of Wrath as the single best book but couldn’t bring myself to drop the other two. You can read my review of them in the top-10 list below.

The average book length was 365 pages, which is shorter than most previous years and that’s because I read a few short classics on my iPad while on trips. 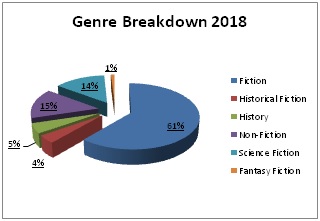 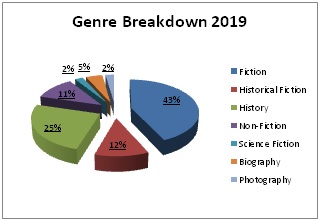 Compared to previous years I read almost no science fiction or fantasy fiction, and a lot more history and historical fiction than last year.

I read a lot of excellent books this year and once again I couldn’t whittle it down to a top-10, so here is my top 12. If you don’t read much, at least consider looking at some of these in 2020. It’s impossible to put them into a priority order so I’ve listed them in the order I read them, along with the short Facebook review I wrote at the time.

#2; Savage Continent: Europe in the Aftermath of World War II; Keith Lowe; 496pp; History; January 18 (As school kids, at least in the UK, history classes taught us that WWII ended, and that was it, and I haven’t read anything about that period of history since my school days. In reality, violence and horror went on throughout Europe for years after the official end of the war. I learned a huge amount from this book that I didn’t know about, including the vengeance that occurred (against occupying forces, camp guards, collaborators), forced migrations of whole populations, ethnic cleansing, reuse of the concentration camps, economic collapse and mass starvation, and more. The book covers the period from the end of the war through end of the 1940s when Europe became relatively stable. Hugely interesting, shocking, and eye-opening, and a great primer for my continuing Cold War readings, as it also describes how the Soviet-backed communists established themselves in many countries. Highly recommended!)

#4; What a Fish Knows: The Inner Lives of Our Underwater Cousins; Jonathan Balcombe; 304pp; Nonfiction; February 8 (Contrary to popular belief, fish do have intelligence, just not like humans. Fish can recognize individuals, learn to use tools, plan for a future event (a grouper signaling to a moray to hunt cooperatively, or a grouper pointing head down at prey hidden in a hole), play, and more. We generally think of fish as dumb things that lead simple lives, but reality is much more complex. This book is a fascinating exploration of what and how fishes perceive, feel, think, know, breed, and are exploited, drawing on myriad scientific studies and interactions. Highly recommended!)

#7; The Last Days of Night; Graham Moore; 384pp; Historical Fiction; April 8 (This is an excellent fictionalization of the true events in the A/C – D/C ‘current war’ between Edison and Westinghouse in the late 1800s that led to the creation of General Electric. It’s a great page-turner and hugely interesting to me as I’d never read the details of the war before. Highly recommended!)

#14; The Idea Factory: Bell Labs and the Great Age of Innovation; Jon Gertner; 422pp; History; June 27 (Amazon’s precis says everything I’d say: “From its beginnings in the 1920s until its demise in the 1980s, Bell Labs-officially, the research and development wing of AT&T-was the biggest, and arguably the best, laboratory for new ideas in the world. From the transistor to the laser, from digital communications to cellular telephony, it’s hard to find an aspect of modern life that hasn’t been touched by Bell Labs. In The Idea Factory, Jon Gertner traces the origins of some of the twentieth century’s most important inventions and delivers a riveting and heretofore untold chapter of American history. At its heart this is a story about the life and work of a small group of brilliant and eccentric men-Mervin Kelly, Bill Shockley, Claude Shannon, John Pierce, and Bill Baker-who spent their careers at Bell Labs. Today, when the drive to invent has become a mantra, Bell Labs offers us a way to enrich our understanding of the challenges and solutions to technological innovation. Here, after all, was where the foundational ideas on the management of innovation were born.” Highly recommended!)

#19; The Map of Knowledge: A Thousand-Year History of How Classical Ideas Were Lost and Found; Violet Moller; 336pp; History; August 12 (This is a fascinating book that explains how ancient Greek knowledge survived the fall of the Roman Empire and suppression by Christianity (for being ‘pagan’) and was reintroduced in the Middle Ages to fuel the renaissance in Europe. It follows three key Greek texts – Euclid’s Elements, Ptolemy’s The Almagest, and Galen’s writings on medicine – plus Arab discoveries as they move around the Mediterranean. Seven cities are highlighted, where the texts either originated, translated, copied or a combination – Alexandria, Baghdad, Cordoba, Toledo, Salerno, Palermo, and Venice – along with the eclectic people mainly responsible. Highly recommended!) 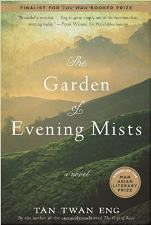 #21; The Garden of Evening Mists; Tan Twan Eng; 352pp; Fiction; September 11 (What a wonderful book! Definitely the best book of the year so far, it totally sucked me in as a page turner and I bought his debut novel as soon as I finished this one. From Amazon: “Malaya, 1951. Yun Ling Teoh, the scarred lone survivor of a brutal Japanese wartime camp, seeks solace among the jungle-fringed tea plantations of Cameron Highlands. There she discovers Yugiri, the only Japanese garden in Malaya, and its owner and creator, the enigmatic Aritomo, exiled former gardener of the emperor of Japan. Despite her hatred of the Japanese, Yun Ling seeks to engage Aritomo to create a garden in memory of her sister, who died in the camp. Aritomo refuses but agrees to accept Yun Ling as his apprentice “until the monsoon comes.” Then she can design a garden for herself. As the months pass, Yun Ling finds herself intimately drawn to the gardener and his art, while all around them a communist guerilla war rages. But the Garden of Evening Mists remains a place of mystery. Who is Aritomo and how did he come to leave Japan? And is the real story of how Yun Ling managed to survive the war perhaps the darkest secret of all?” Highly, highly recommended!) 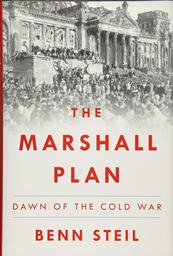 #22; The Marshall Plan: Dawn of the Cold War; Benn Steil; 608pp; History; September 17 (Continuing my loose ‘Cold War’ year of reading, this book does an excellent job of detailing the events leading up to the creation and implementation of the famous Marshall Plan. It helped with the reconstruction of post-war Western Europe as a barrier against the expansion of communism from the East, and was an extraordinary undertaking by the US to reintegrate Germany into society after the horrors it inflicted during WWII. It also can be said to have precipitated the Cold War, as Stalin’s instructions to countries under the Soviet thumb to refuse US aid effectively created the Iron Curtain and the division of Soviet vs. US spheres of influence in Europe. The book is quite the page turner and gives the complete history in a really engaging and interesting way, and now I’m looking forward to reading Steil’s The Battle of Breton Woods. Highly recommended!) 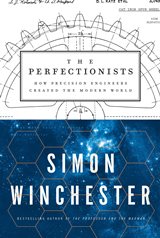 #31; The Perfectionists: How Precision Engineers Created the Modern World; Simon Winchester; 416pp; Nonfiction; November 3 (Winchester’s books are always extraordinary and this one was really superb. As an engineer by education and training, this topic is fascinating. He orders the book by increasing precision, starting with a bored cylinder for James Watt’s steam engine in 1776 that had a tolerance of the width of a shilling, and ending with machines in the LIGO gravity-wave detection facilities (which can measure light to a precision of 1 ten-thousandth the width of a proton, or in another definition, the distance from Earth to Alpha Centauri A to an accuracy of less than the diameter of a human hair). Entertaining, *hugely* educational, and highly recommended (and also all the other books he’s written). Enjoy!)

#32; The Lovely Bones; Alice Sebold; 352pp; Fiction; November 28 (I’ve seen this many times in airport bookshops and realized at the start of the flight that I had it on my iPad (don’t take real books on Asia dive trips any more) so gave it a whirl. What a page turner! Excellent novel about a girl who is murdered and then watches (from her heaven) her family, friends, and killer continue with their lives over the next 10 years. Very well written, and well deserved #1 best seller at the time. Highly recommended!)

#33; A Farewell to Arms; Ernest Hemingway; 352pp; Fiction; November 28 (This is an excellent semi-autobiographical novel based on Hemingway’s time as an ambulance driver in Italy during WWI. It’s about an American ambulance driver who’s injured and falls in love with an English nurse during his convalescence. Once back at the front he gets caught up in a shambolic retreat and deserts to run away with his love. Hugely gripping and highly recommended!)

#35; The Call of the Wild; Jack London; 64pp; Fiction; November 29 (What an excellent book! This is definitely on my short list for one of the best books of the year. It follows the life of Buck, a huge St. Bernard/shepherd mix, who is stolen from a life of privilege in CA and transported to the harsh life on a dog team in Alaska. Gradually Buck transforms into a leader and a legend, eventually reverting completely to a wild state. Hugely enjoyable and highly recommended!)

#42; The Grapes of Wrath; John Steinbeck; 464pp; Fiction; December 17 (Wow. What a fantastic book. It’s an extremely powerful story about the struggles and deprivations of a mid-West family being thrown off their land and moving West to the Shangri-la of California during the Great Depression era of the US in the 1930s. Sometimes horrific and sometimes uplifting, it’s a total masterpiece. Hugely recommended!)